Re-watch all of today's action at
www.rotax.com.au/streaming.html

A sensational Grand Final Day at the Lincoln County Raceway in Dubbo, New South Wales, has produced some of the toughest racing that we have seen in the 2016 Rotax Pro Tour season, providing a number of Team Australia’s drivers with the preparation they need, heading into their World Finals assault in Italy in three weeks time.

Nathan Tigani who will be part of the DD2 World Final squad showed some rare dominance in the class, whilst our youngest representative, Sebastian Ruiz continued to prove that he is ready to take on the world in Micro Max.

Alec Morse showed steely resolve to take the Junior Max win after a difficult weekend, while Lee Mitchener and Kris Walton are at their best heading to the world stage.

MICRO MAX
Sebastian Ruiz has shown that he is prepared for the Rotax Max Challenge World Finals in Italy with a dominant performance in Micro Max. The Canberra based Tony Kart driver won convincingly in the 17 lap final, however behind him it wasn’t as cut and dried. The battle between Macka Hazard and Harry Arnett went to the wire, with officials having to go for a photo, eventually awarding second to Hazard. Early pacesetter Emerson Vincent came home in fourth placing after a spirited battle with Hazard and Arnett. 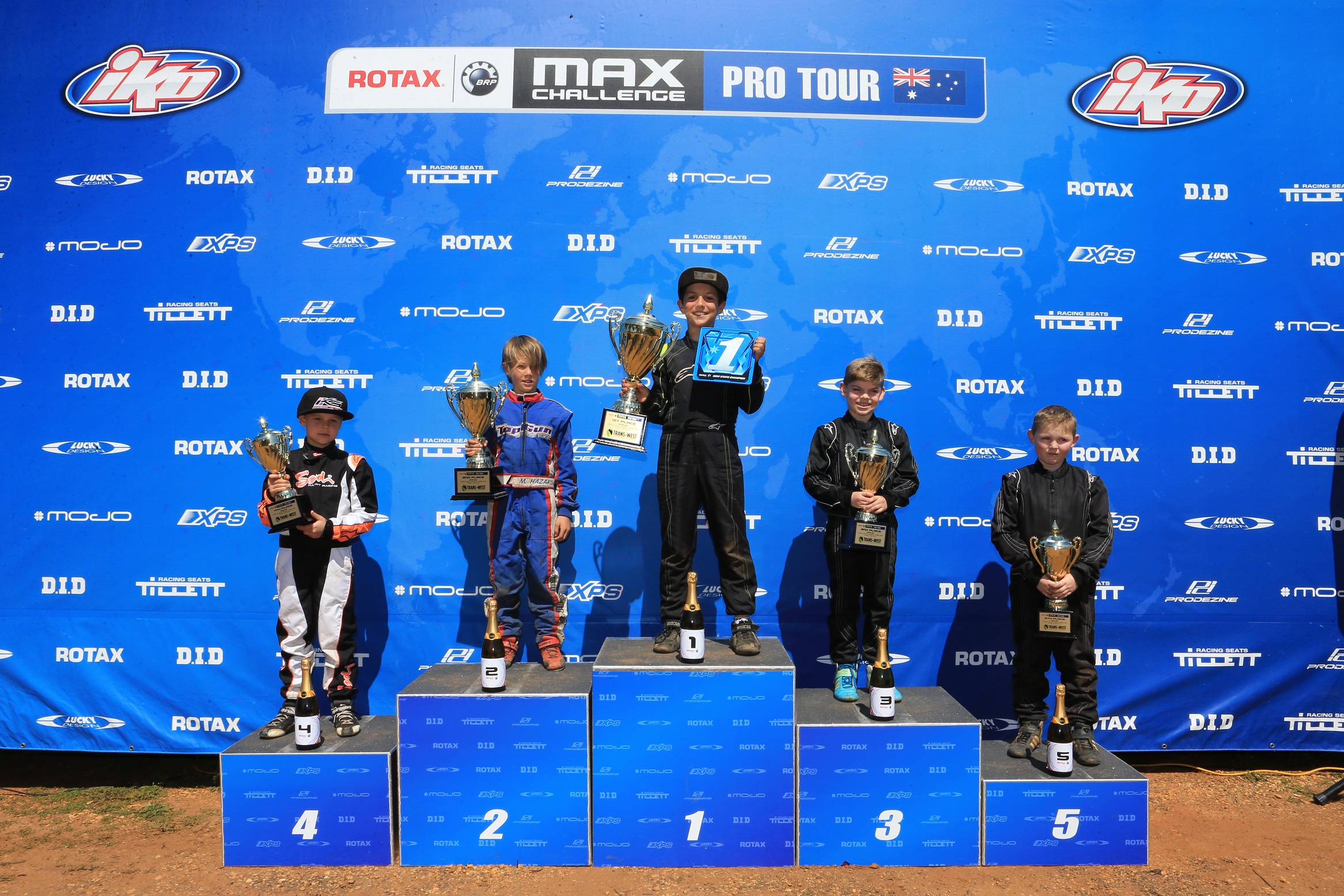 DD2
Nathan Tigani has sent a signal that he will be in contention for the World Finals in three weeks time with a dominant performance in DD2 this afternoon. After winning two of the three heats yesterday, he did not look like being headed in any stage of competition aboard his Karting World Kosmic. His fastest lap was more than 0.2s faster than anyone and his margin of victory was 3.4 seconds in the end.

Lee Mitchener completed his solid weekend with a second placed finish, whilst much of the attention throughout the 21 lap final surrounded the battle for third between Joshua Car and ‘Captain Kangaroo’ Troy Woolston - who will captain Australia’s team at the World Finals in Italy.

Young charger Car pushed his CompKart past Woolston and into third just past the halfway point and was able to maintain that third position right to the end of the race. Ryan Kennedy for the first time of the weekend showed any true pace bringing his Formula K machine home in fifth. 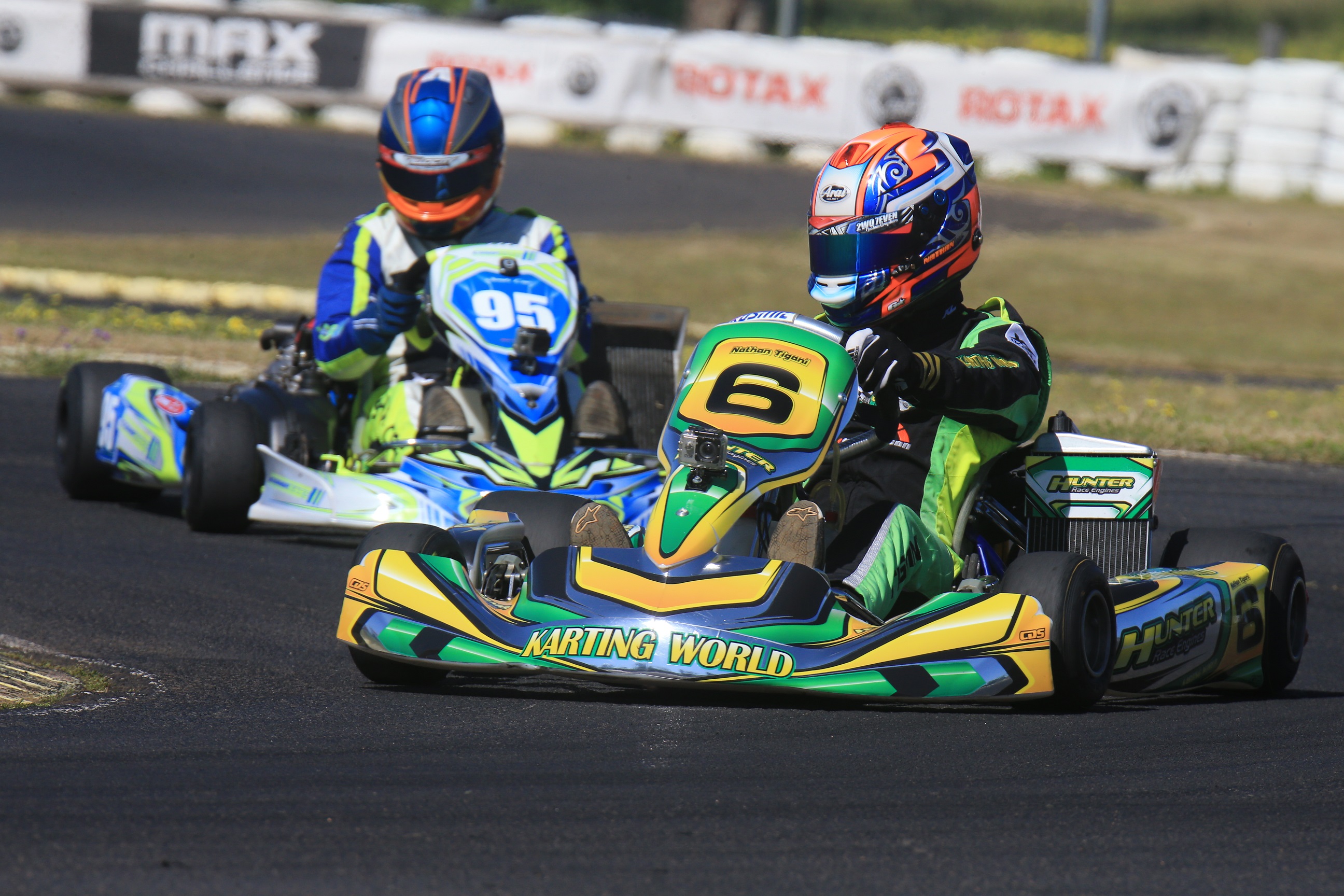 Above: Nathan Tigani put together a stellar season in DD2 to earn the sought after Number 1 plate (Coopers Photography)

DD2 MASTERS
Kris Walton and Lee Mitchener staged an epic fight throughout the 21-lap final of DD2 Masters. Whilst with three quarters of the race gone, it looked as though CompKart Australia driver Walton was going to sail away with a comfortable victory. Mitchener had other ideas and closed the gap down to nothing. With five laps to go, Mitchener got to the lead to the surprise of Walton who stuck with the Victorian Formula K racer. Inexplicably, three laps from home Walton’s kart expired entering the front straightaway, giving Mitchener an easy victory. Danny Wright brought his Praga home for a solid second position, but was later disqualified elevating Mark Flood to third, Scott Howard to fourth, and Troy Bretherton to fifth to complete the podium.

Above: Lee Mitchener celebrating as he wraps up his Rotax MAX Australian Challenge Title (Coopers Photography)

ROTAX 125 LIGHT
The two Tom Williamson Motorsport drivers, Joshua Fife and Cody Gillis have been locked to each other’s crash bars for much of the weekend and today was no different, however it had a vastly different result in the early stages of the final. After passing each other several times during the early course of the race, the pair collided at turn one dropping themselves to the rear of field. This opened up the front to be a wonderful kart race. Paul Rodgers, Wayne Bourke and Thomas MacDonald started a great fight for the lead, before MacDonald was able to open up a lead to be slightly comfortable. The CRG driver was able to come home for the win over Rodgers who held off Marc Tulloch in third placing. Liam Ford came home in fourth, while Troy Morrissey brought his Arrow fro 22nd and last on the grid to fifth. 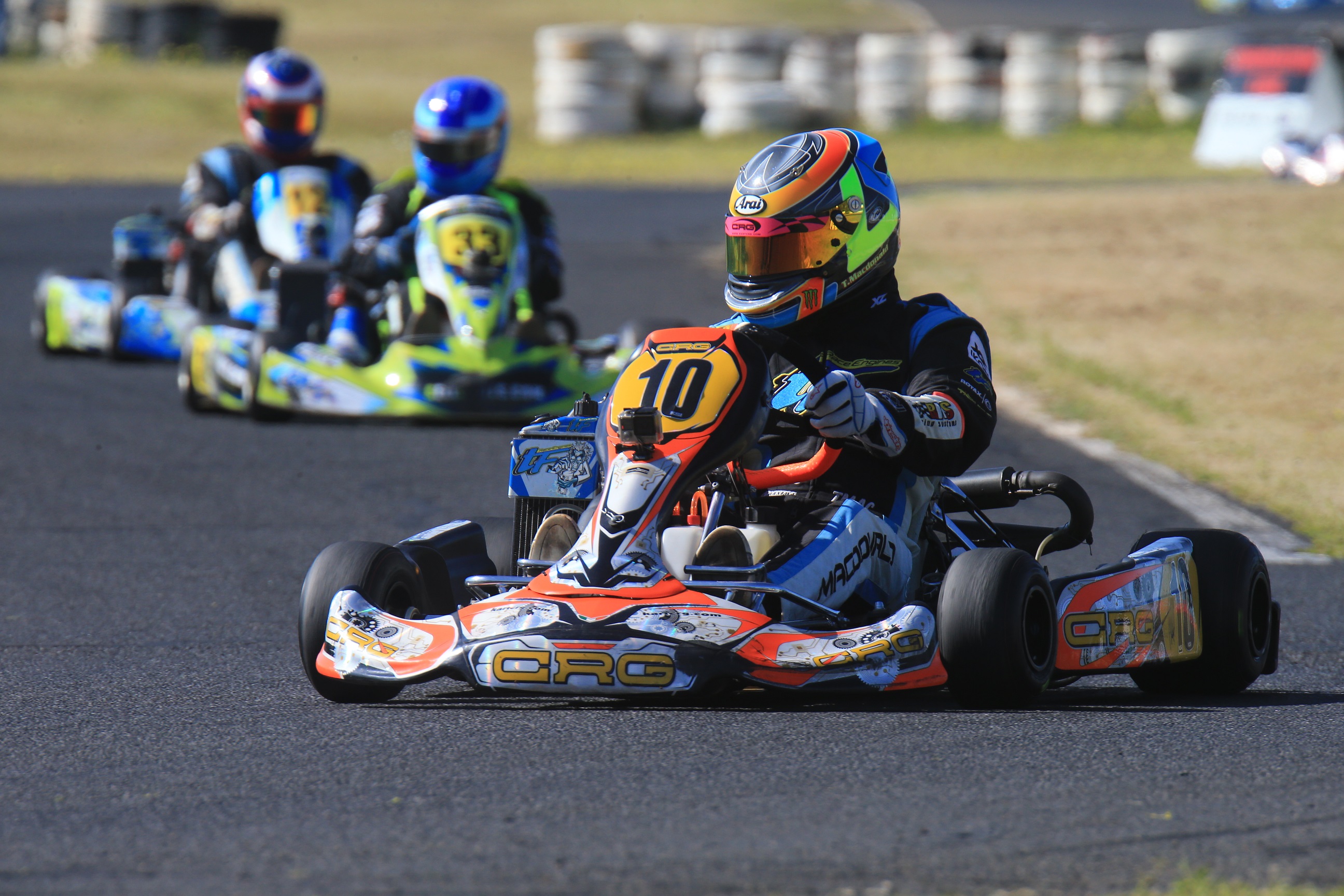 Above: Thomas "T-MAC" Macdonald hangs the boots on a high, winning the Final and the NSW State Title in the Rotax 125 Light class (Coopers Photography)

MINI MAX
The closest finish of the day came in Mini Max when Shamick Racing CRG driver James Wharton crossed the line just 0.006 in front of Jack Westbury. Wharton got the best run off the second to last turn then got another great run onto the front straightaway to draw level with Praga driver Westbury. It was a cruel outcome for the Queenslander who led every single lap and right up until the last 20 metres, and then later receiving a post-race penalty. The battle for the minors was a thriller also with Kai Allen getting the best of Hugh Barter, with Cody Maynes-Rutty and Luke Pink being elevated to fourth and fifth. 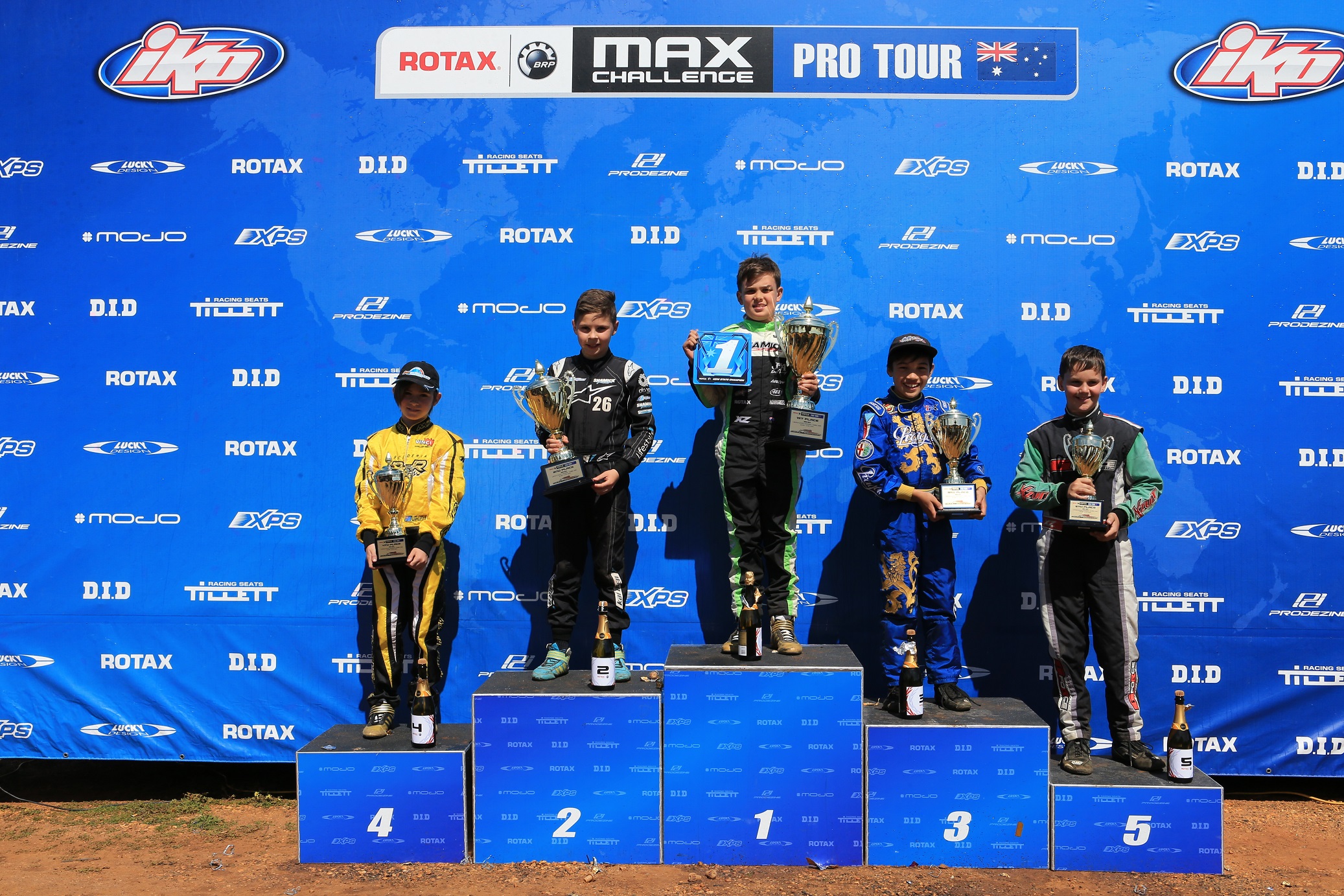 JUNIOR MAX TROPHY
One of the big surprise winners this afternoon was in the Junior Max Trophy class. Callum Bishop hadn’t showed pace all weekend long, however worked his way forward to get in front and ultimately take a memorable win. Aron Shields led for much of the race until Bishop was able to get around him, this then left him vulnerable for lady racer Taylah Agius. Agius tried valiantly to get herself up further on the podium but had to settle for third placing. Taylor Hazard was fourth with Zayd Tones coming home fifth. 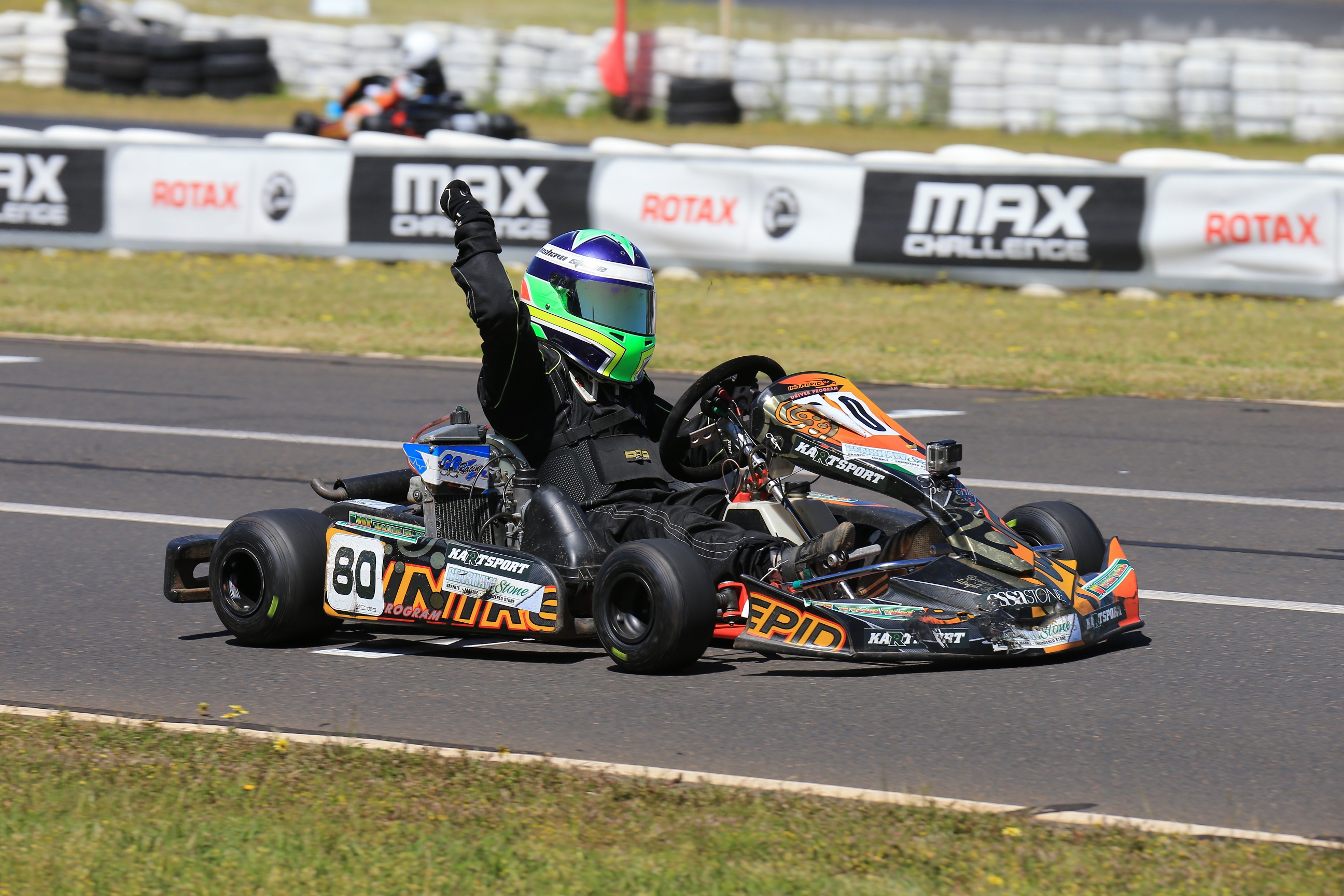 Above: Callum Bishop surprised all with victory in the Junior Max Trophy Final (Coopers Photography)

ROTAX 125 HEAVY
Rotax Heavy fell the way comfortably of Joshua Davey. After a tremendous pre-final, the stage was set for a cracking Grand Final, however it didn’t turn out that way. Young Gold Coaster Davey was dominant in his Kosmic kart taking the win over Chris Farkas and points leader heading into the weekend Shay Mayes. Kris Walton and Clem O’Mara rounded out the top five. 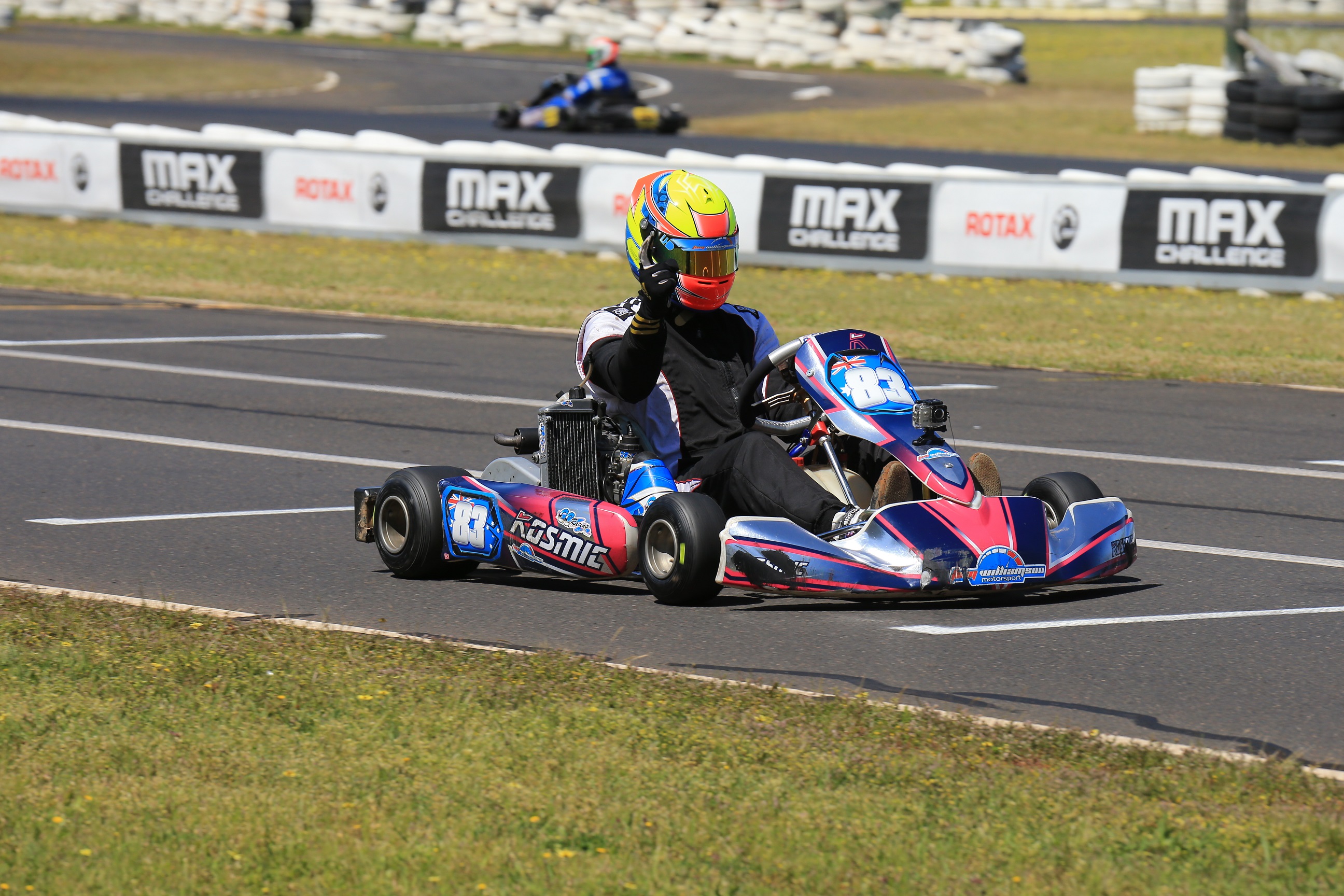 JUNIOR MAX
This could be arguably the hardest fought Pro Tour victory that Alec Morse has ever taken. Cody Brewczynski got the best of the start and was leading the way for the majority of the race until Morse closed down on him. Morse stalked the Redspeed-mounted Blacktown (Sydney) driver until he was able to make a decisive move. However, Brewczynski was having none of it and wanted to take the fight right to the end which he did so. What they weren’t banking on was a hard charging Kiwi Matthew Payne who was taking 0.3s out of them with each lap. At the end of the race, you could almost throw a blanket over the top three. Reece Cohen was valiant in fourth placing - having spent much of the race in the top three whilst New Zealand lady racer, Rianna O’Meara-Hunt was the best of the female competitors this weekend finishing fifth in the tough category - an outstanding performance. 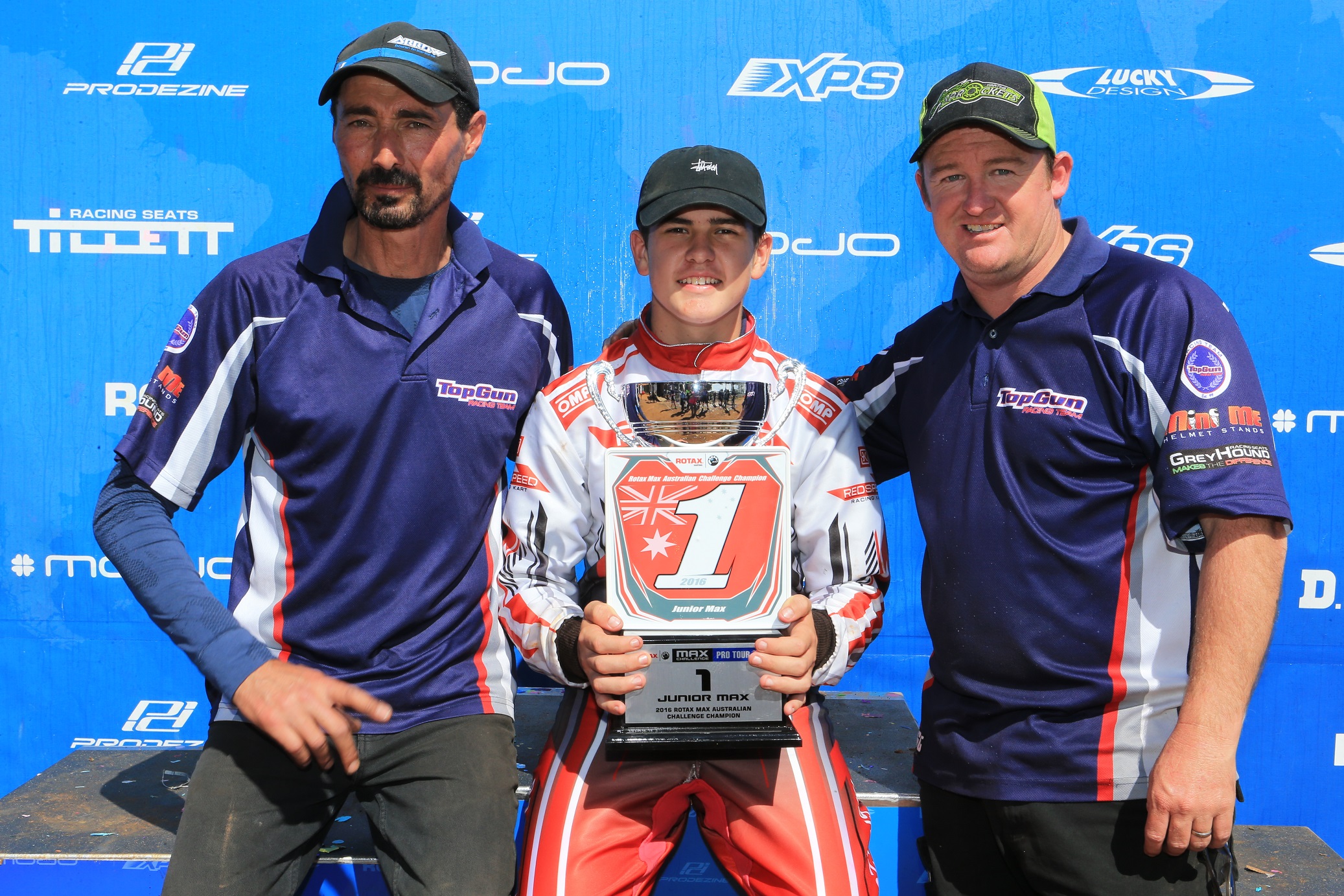 Culminating the year, the focus now switches to our Australian drivers travelling abroad to stage their best efforts against the best in the World. Stay tuned to www.rotax.com.au for all the progress and action from the  Rotax MAX Challenge Grand Finals in Sarno Italy, and Rotax US Open in Las Vegas, USA.