Albury driver Jordan Boys has secured the round victory in DD2, thus being awarded the Jason Richards Cup in addition to his first place trophy in recognition of the former V8 Supercar star’s competition in the category at the Rotax Pro Tour in 2010. Boys’ result was one of many which will now add further interest to the Rotax rankings with just two rounds of the Pro Tour remaining for the 2014 season.

DD2 Masters
After qualifying tenth for Sunday’s heat races, Sydney’s Adam Hunter revived his season form to secure victory in the opening race in DD2 Masters. Danny Wright’s continued strong Geelong form was rewarded with second behind Hunter, while Mark Domaschenz capitalised on a strong Sunday qualifying performance to finish third. Daniel Richert took fourth with Jose Ruiz in fifth. With the grid positions for the heat races being identical, Ellery took charge from the outset in heat two by securing a race victory from pole position. The success of Danny Wright continued with the Albury driver taking another strong second place, while Jose Ruiz improved to secure third from Daniel Richert, Mark Domaschenz and Trevor Whitby.

Danny Wright’s consistent form throughout the heat races helped him secure pole position for the 22 lap final, with the points of Saturday’s final combining with the Sunday event determining the Jason Richards Memorial round winners. Steve Ellery would start second, with Adam Hunter third, Mark Domaschenz fourth, Jose Ruiz fifth and Daniel Richert in sixth. Another strong race start from Ellery saw him take a comfortable lead from the outset, despite charges throughout the race from both Richert and Hunter, the Queenslander held on for the win finishing ahead of Richert and Hunter with Tony Bregonje improving from his heat race results to finish fourth with Hamish Leighton in fifth after recording the fastest lap of the race. On the combined final points, Daniel Richert was awarded the round victory with Adam Hunter in second and Hamish Leighton in third.

Above: Queensland’s Steve Ellery took the win in the Sunday final for DD2 Masters.
Photo - IKD 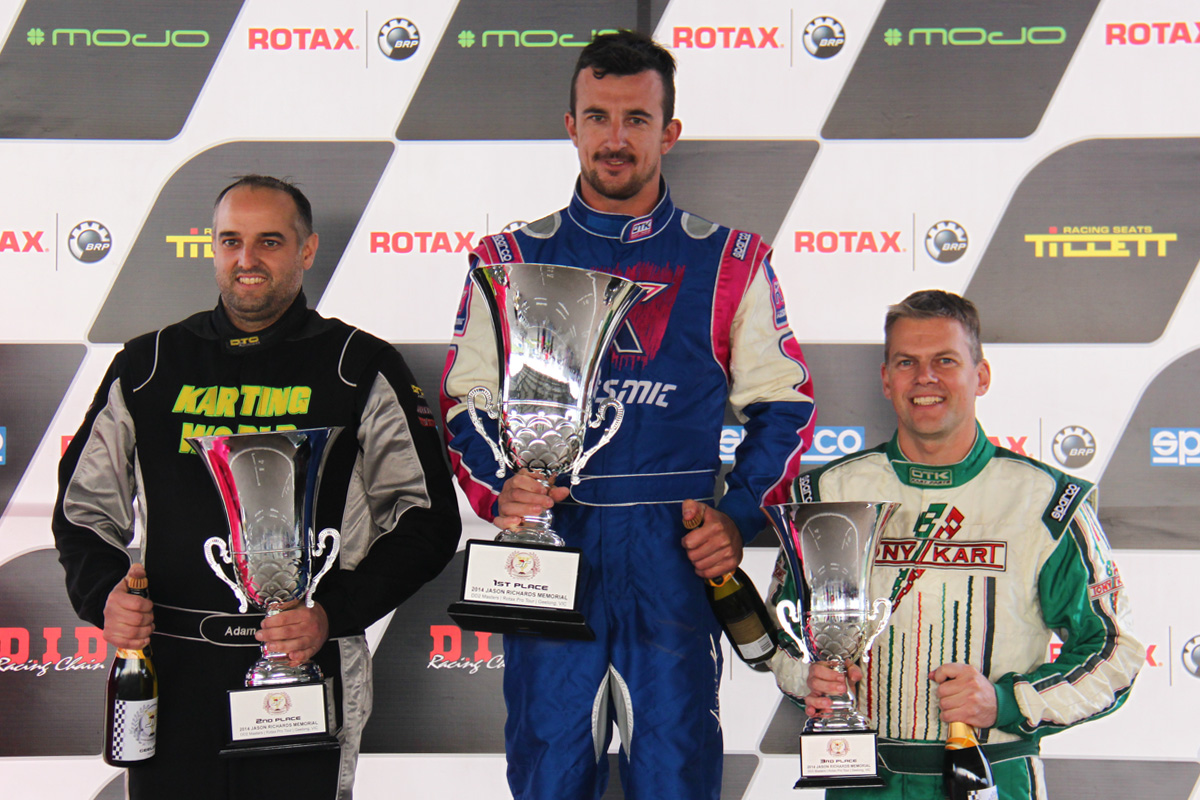 Rotax Heavy
A strong battle amongst the top five in Rotax Heavy highlighted the day’s three events for the category, with Victorian regulars Rick Pringle, Paul Rodgers and Dylan Collett continuing to feature amongst the front runners in the field. Scott King stepped up in the opening heat of the day, managing to break away late in the race and take the win, finishing ahead of Pringle and Collett. James Reid held on for fourth ahead of Brandon Stillwell with Paul Rodgers settling for sixth. Rodgers returned fire in the second heat, stepping up to take the race victory, with Dylan Collett in second. Rick Pringle managed third with Jack Woodfall in fourth and Brandon Stillwell taking another fifth place finish. Collett’s results helped him to secure pole position for the Sunday final alongside Pringle, with Rodgers and King starting from the second row and Stillwell and Woodfall from fifth and sixth respectively.

Following on from his heat two victory, Paul Rodgers replicated his performance to take the win in the final with the four way dice returning in the race. In a mirror of the heat race result, Dylan Collett took second behind Rodgers with Rick Pringle taking third. Scott King rounded out the battle in fourth with James Reid returning from his heat two DNF to take fifth. The combined final points handed Rick Pringle the round victory with Dylan Collett second and Scott King third. Under the series Rotax Heavy rules, Pringle opted to take the $500 cash for the round victory. 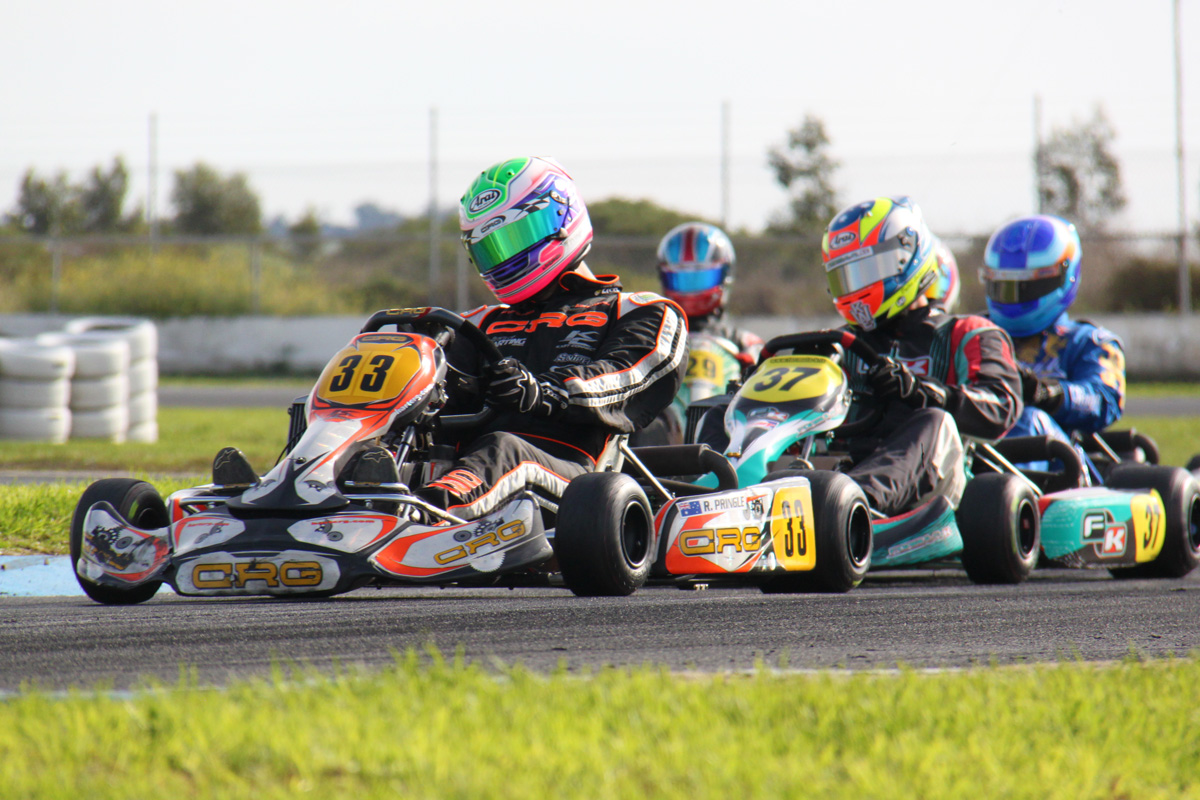 Above: Rick Pringle secured the round victory in Rotax Heavy and took the $500 cash reward.
Photo - IKD 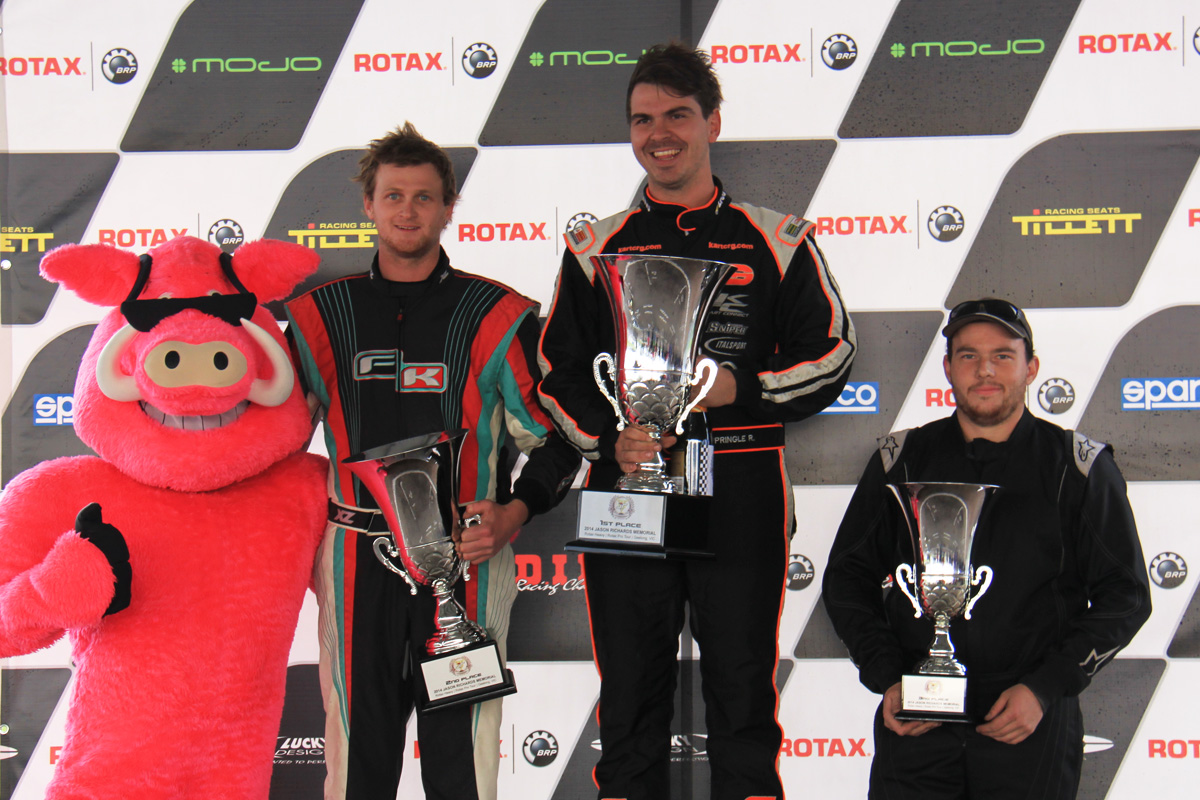 Sodi Junior Max Trophy Class
A highly competitive opening heat for the Sodi Junior Max Trophy Class saw Sydney’s Chris Bregonje take victory ahead of team mate, Mathew Geering. Harrison Carr and Saturday final winner, Glen Ormerod finished third and fourth respectively with Samuel Dicker and Ryan Pike taking fifth and sixth. Ormerod returned to his winning ways in heat two, which would subsequently help him to secure pole position for the final, with West Australian Samuel Dicker taking second ahead of Pike and Brooke Redden. Chris Bregonje slipped back from his first heat success to take fifth while Jye Hopkins finished sixth. Glen Ormerod would be joined on the front row by Chris Bregonje, while Samuel Dicker shared the second row with Ryan Pike, while Mathew Geering and Harrison Carr were set to start from fifth and sixth.

After his victory on debut in Lithgow, Samuel Dicker again stepped up to make a late race pass and secure the win in the final. Dicker finished ahead of Glen Ormerod whose weekend success continued, while Brooke Redden made it two West Australian drivers in the top three by taking third. Ryan Pike took fourth with Chris Bregonje in fifth and Jye Hopkins in sixth. On combined round points, Glen Ormerod was awarded the round victory with Samuel Dicker in second, Ryan Pike in third, Brooke Redden in fourth and Chris Bregonje in fifth. 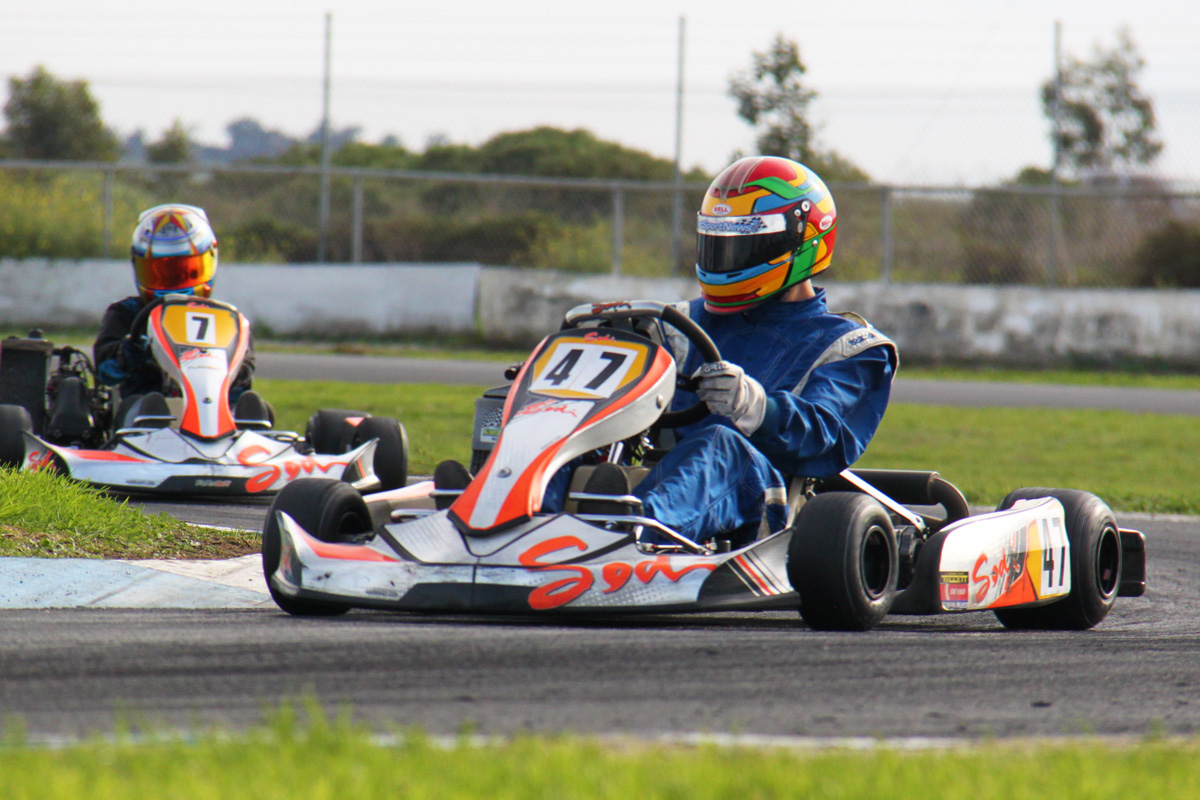 Above: Glen Ormerod backed up his success from Saturday to take the round win in the Sodi Junior Max Trophy Class.
Photo - IKD 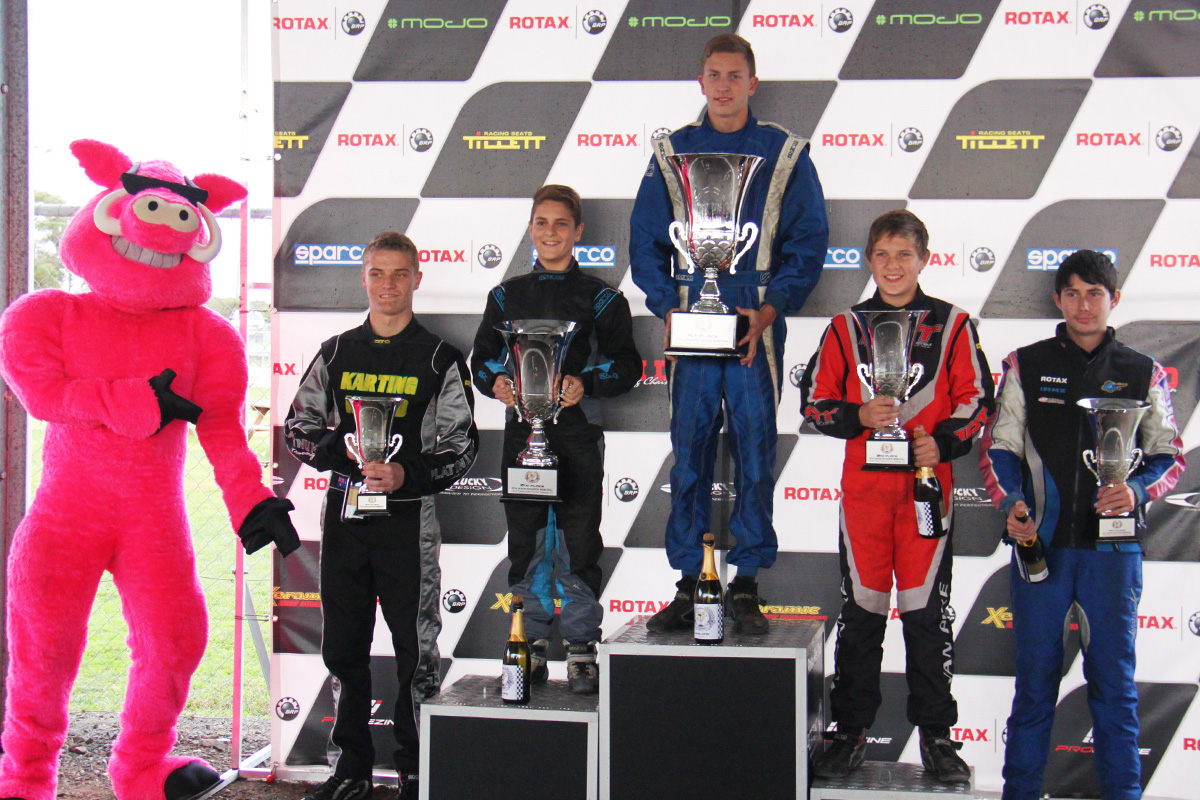 Rotax Light
The unbeatable success of Brad Jenner continued into Sunday’s opening 14 lap heat race with the Victorian taking victory in Rotax Light. After his top six qualifying effort, South Australian Jayden Sharrad stepped up and took second in the opening heat race behind Jenner with Dalton Ellery taking third. Rotax rankings front runner Andrew Carey finished fourth with Dean O’Brien fifth and Thomas MacDonald sixth. Jenner’s unstoppable performance continued into heat two, subsequently handing him pole position for the final. Ellery stepped up to take second helping him to start on the front row alongside Jenner, with Andrew Carey finishing third from Jordan Boys who recovered from a DNF in heat one with Sharrad in fifth. With the front row locked away for the final, Jayden Sharrad and Andrew Carey would start from third and fourth with Brenton Mountjoy and Thomas MacDonald starting from fifth and sixth.

Brad Jenner made it a Sunday clean sweep in the 22 lap final, taking the victory despite numerous challenges and changes of position occurring behind him. Andrew Carey eventually moved through to second which is where he would remain by the fall of the chequered flag, while Brenton Mountjoy and New Zealand’s Daniel Kinsman took third and fourth. Jordan Boys continued his form recovery to take fifth ahead of Thomas MacDonald in sixth. On combined round points, Brad Jenner was declared the round winner with Jordan Boys in second and Brenton Mountjoy in third. 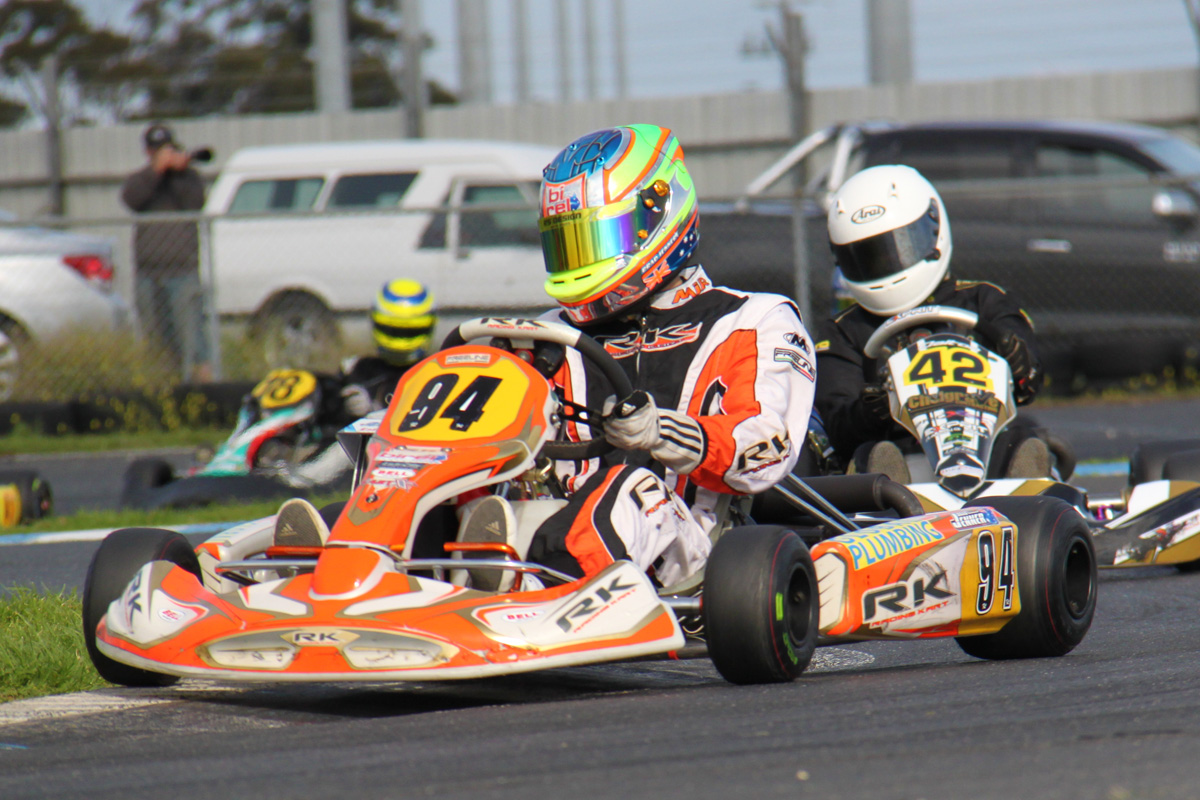 Above: Brad Jenner took a clean sweep of wins across Saturday and Sunday in Rotax Light.
Photo - IKD 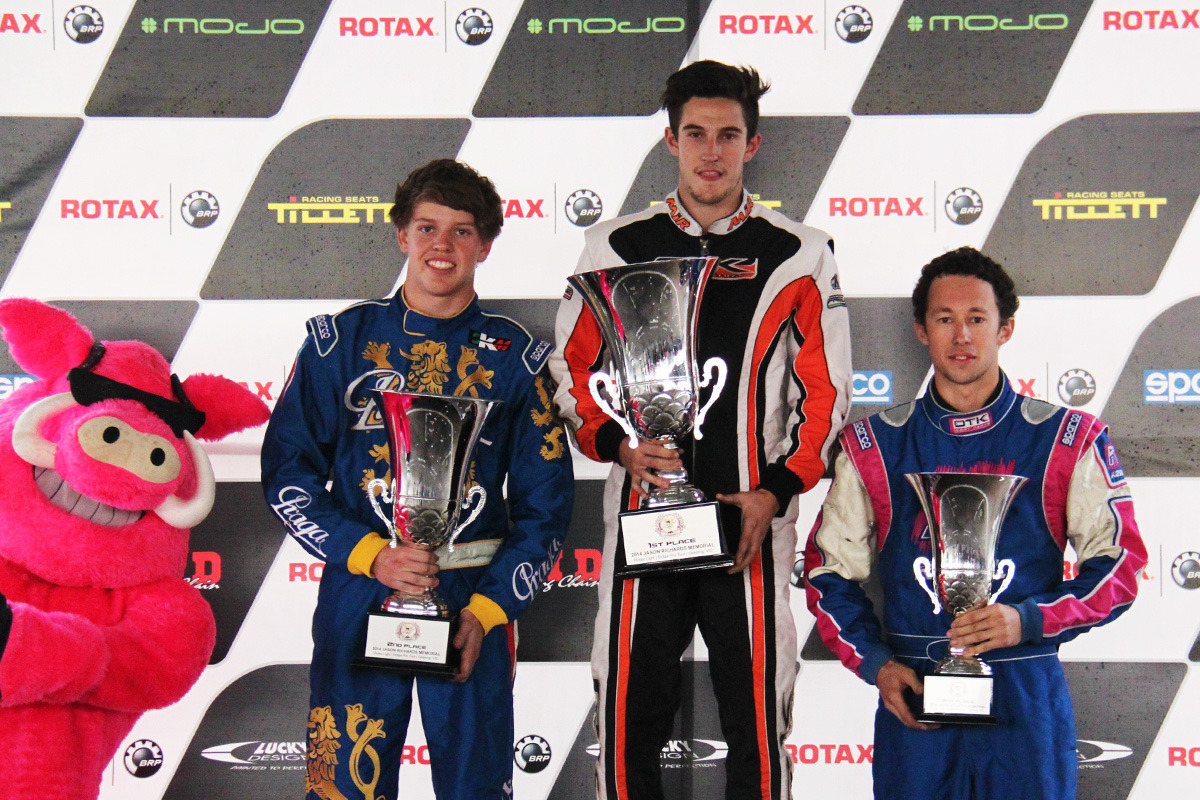 An enthralling battle between Bryce Fullwood and Reece Sidebottom for much of the 22 lap final highlighted a race full of excitement, with numerous passing manoeuvres, testing the limits of the drivers on worn tyres. A late race move by Sidebottom with under two laps to go saw him drive through to claim the race victory ahead of Fullwood from Ojeda and Hughes. Callum Walker made his way through to fifth, spending much of the race chasing down the top four runners while Spencer Ackermann held on for sixth. Under the combined points regulations, Bryce Fullwood was declared the round winner with Reece Sidebottom in second and Jayden Ojeda in third. 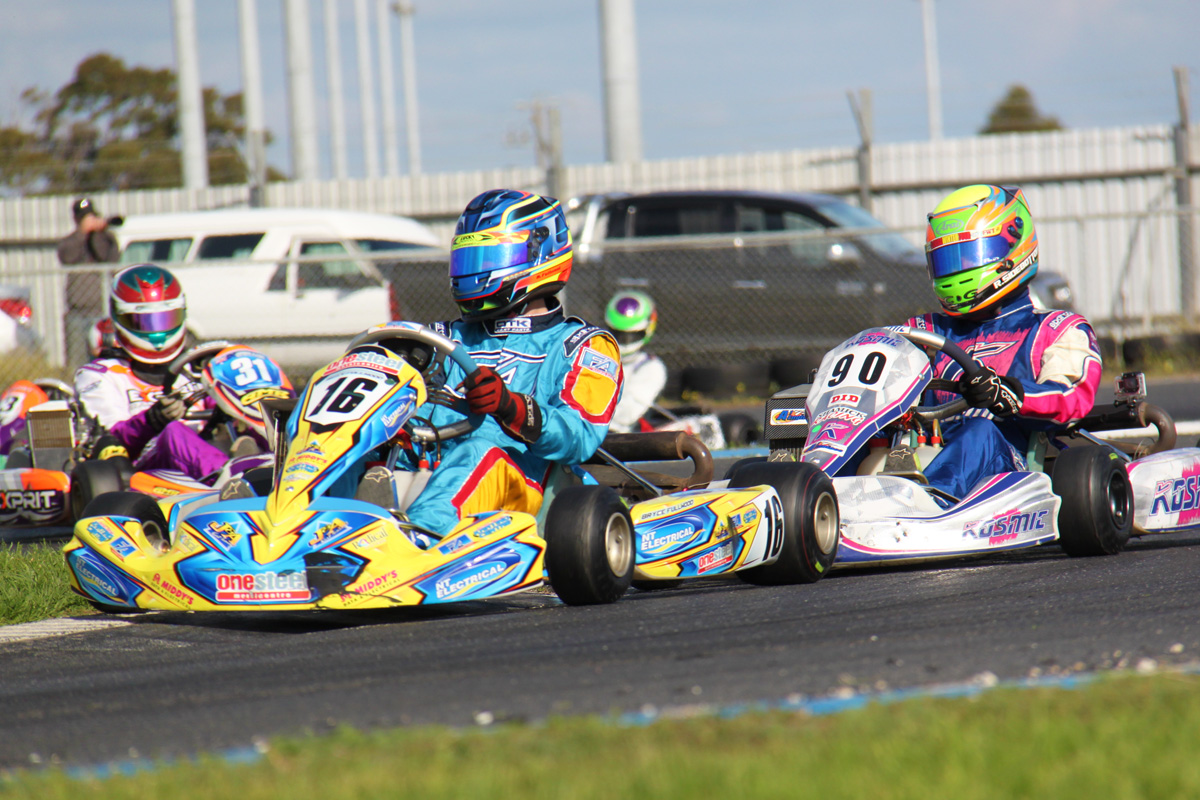 Above: Bryce Fullwood took advantage of his Sunday pole position to secure the round win in Junior Max.
Photo - IKD 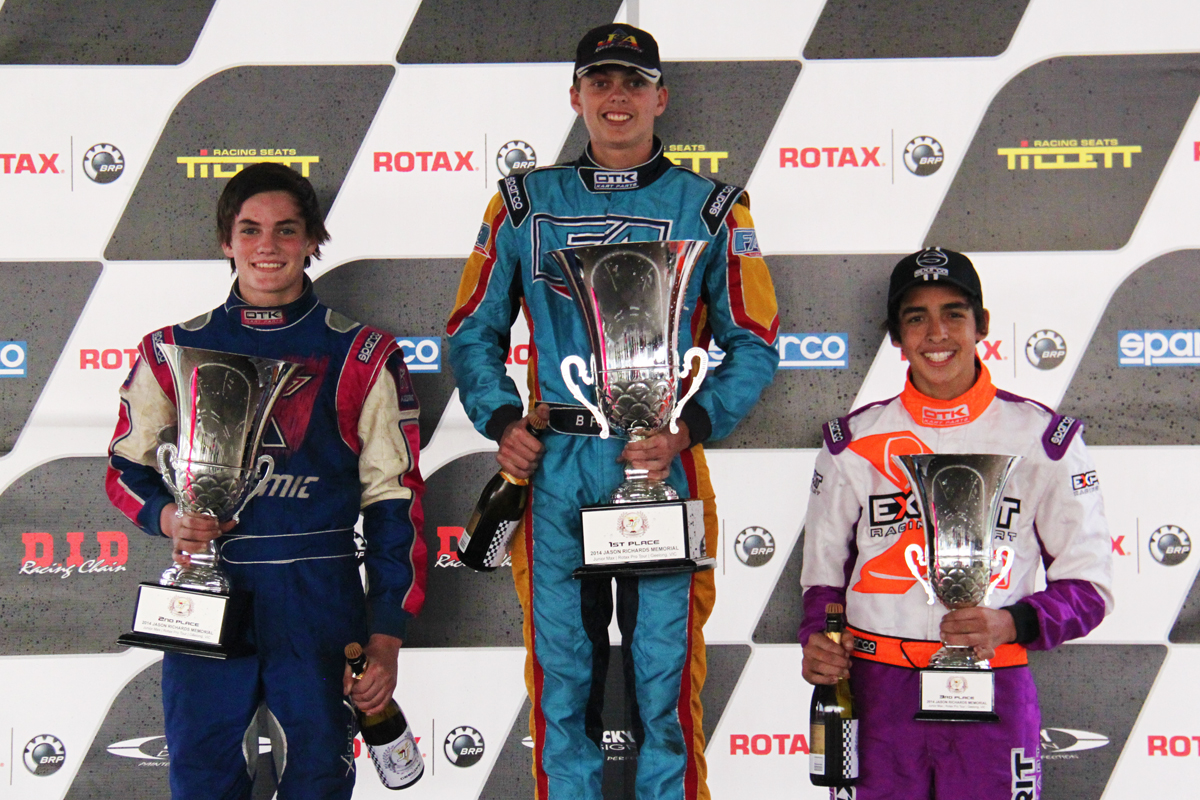 DD2
The return to Kart racing for Canberra’s Michael Stewart delivered success in heat one with the Speedcar driver taking victory. Stewart fought hard to the lead, crossing the line ahead of Adam Lindstrom and Saturday final winner, Jordan Boys. Zachary Phillips made the most of his strong qualifying result to secure fourth ahead of Nathan Taylor and Jason Pringle. After recording a DNF in heat one, James Macken took advantage of his heat race pole position to take victory in heat two. Adam Lindstrom’s second place finish in two races in a row subsequently handed him pole position for the final, with Jordan Boys recording his second third place finish in a row. Nathan Taylor took fourth, while Tristan Ellery finished fifth ahead of Damian Ward in sixth. With Lindstrom securing pole, Jordan Boys capitalised on his consistency to start second, with Nathan Taylor and Tristan Ellery starting third and fourth with Zachary Phillips and Jason Pringle making up the third row.

After his success in Saturday’s longer race, Jordan Boys returned to the top in the final taking a hard fought victory ahead of a highly competitive field, with the front running positions not being decided until the final stages of the race. Adam Lindstrom settled for second, finishing just behind Boys with Nathan Taylor in third and Troy Woolston in fourth. After his success in the opening heat race, Michael Stewart eventually finished fifth with Jason Pringle settling for sixth. In addition to his round victory, Jordan Boys was also awarded the Jason Richards Cup with Troy Woolston finishing second for the round and Michael Stewart third. 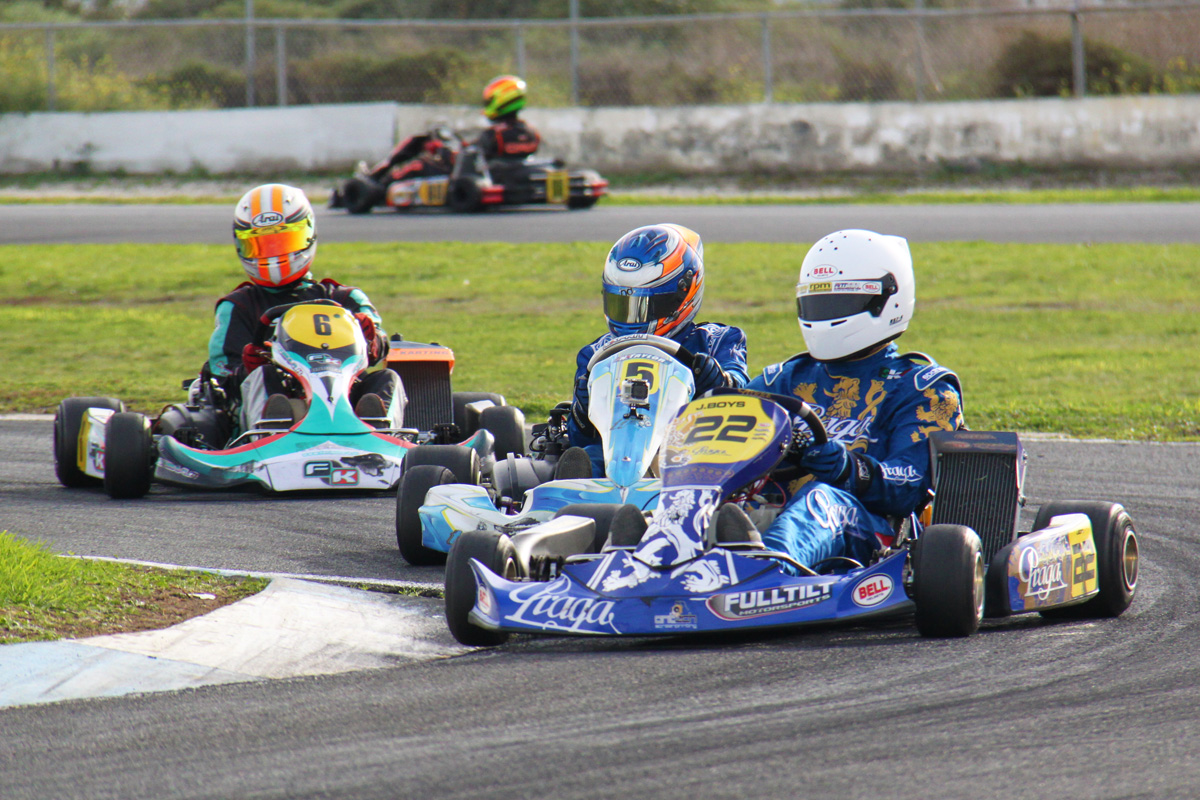 Above: Jordan Boys took the win in both Saturday and Sunday’s final handing him the round victory in DD2 and the JR Cup.
Photo - IKD 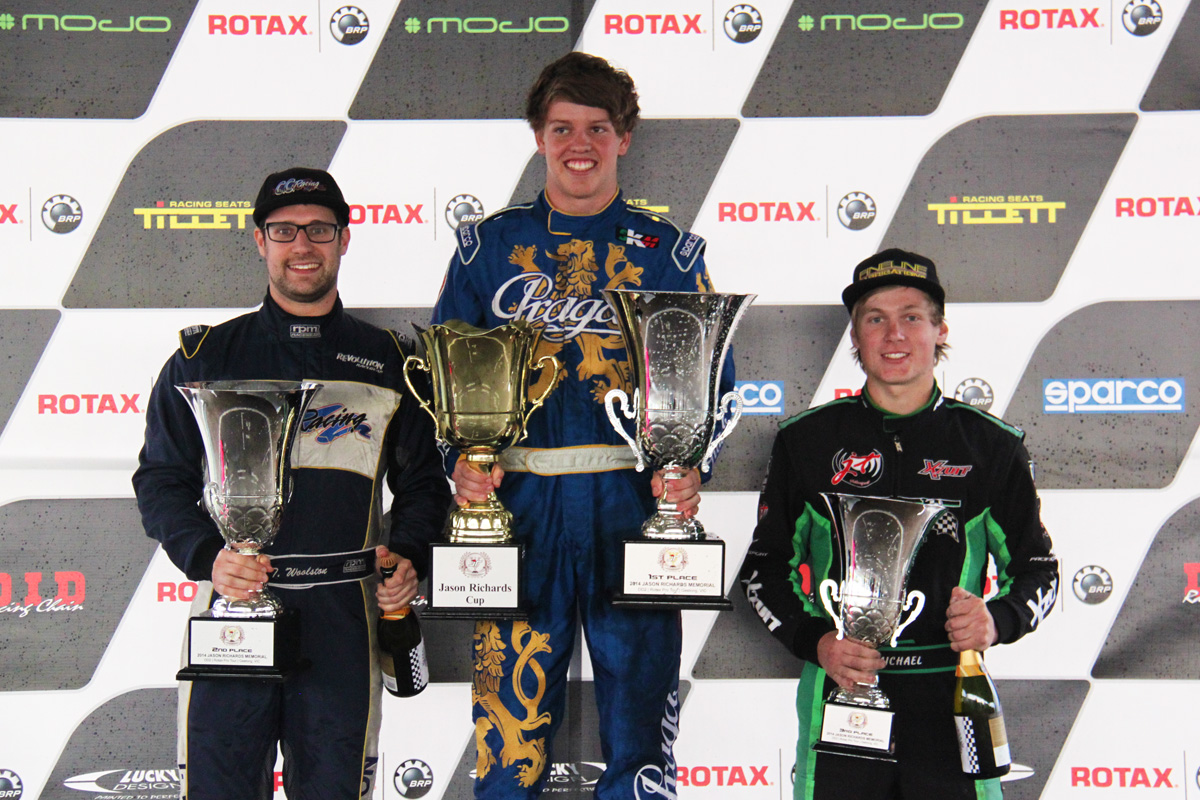 Round six of the 2014 Rotax Pro Tour will take place at the Sandy Creek Raceway in Warwick, Queensland on the weekend of June 20-22.

Make sure you stay up to date with all the latest Rotax news by following the Rotax Pro Tour on Facebook and Twitter.