Albury’s Jack Richardson has been awarded the 2015 Jason Richards Memorial Award at the official presentation ceremony that has closed off a busy day of racing at Sydney’s Eastern Creek. With the finals now in sight for the fifth round of the Rotax Pro Tour, the series points in addition to the NSW State Titles are on the line, and the weekend’s longer races are sure to become very hotly contested.

Micro Max – Proudly sponsored by The Kartworks
On the back of his round win on debut at Warwick, Adrian Haak held provisional pole position throughout the early stages of qualifying, though Oscar Targett managed to secure the quickest time late in the session with a 46.852, handing him a front row start with Haak. On debut, Cody Maynes-Rutty secured third with Marcos Flack in fourth while Jack Westbury and Ethan Feather would form the third row. A thrilling opening heat race saw multiple lead changes before a last lap pass earnt Haak the race win. Marcos Flack took the lead in patches before settling for second ahead of Jack Westbury with Oscar Targett claiming fourth after starting pole and Ethan Feather fifth. 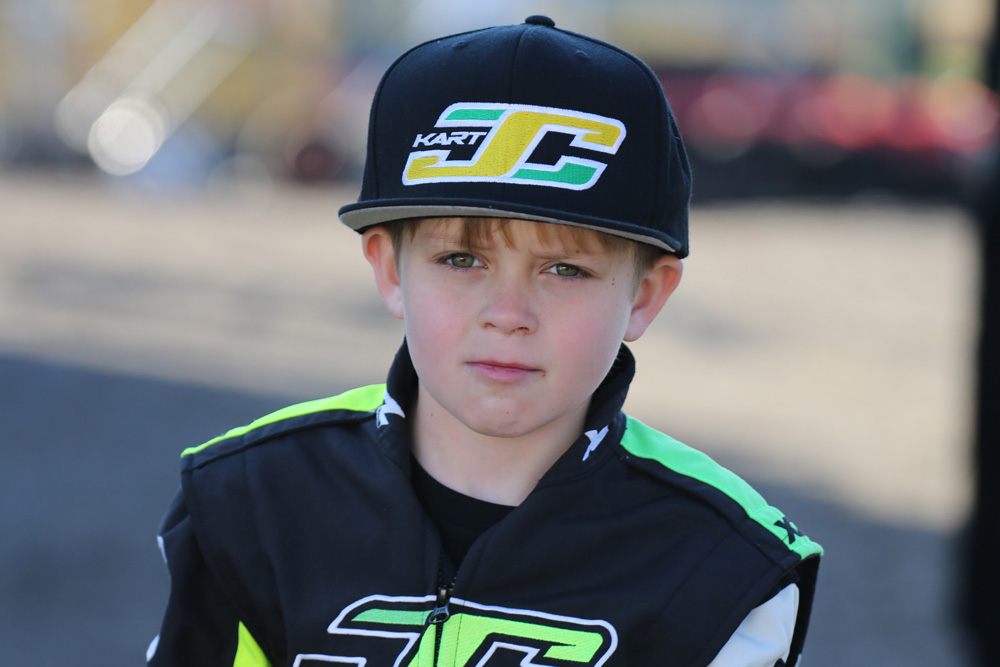 Mini Max – Proudly sponsored by G-Force Karting
It would be just 0.02 seconds that would separate the top four by the completion of qualifying for Mini Max with Austin Wells claiming pole with a 44.338, sharing the front row with Warwick round winner Jaiden Pope. Setting his quickest time on his final lap in the session, Jackson Walls stepped up to take third over Callum Bishop in fourth  while Dylan Debono would star the heat races in fifth. Coming from second, Jaiden Pope kick-started his weekend in fine style, claiming heat one from a hard charging Callum Bishop. Jackson Walls maintained close company with the lead pair for settling for third over Bayley Douglas and James Wharton. 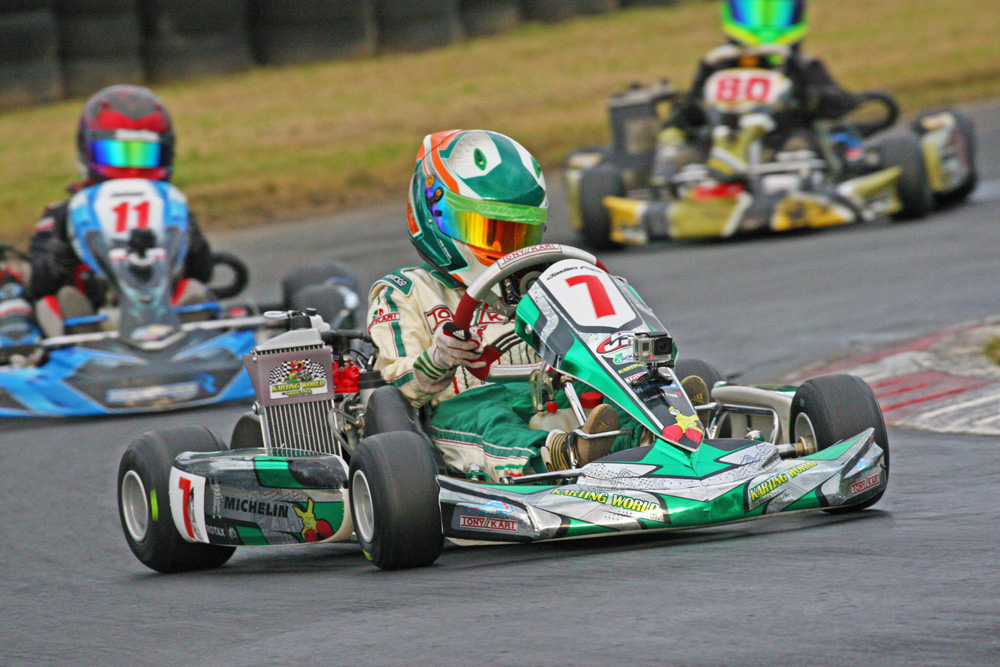 Junior Max Trophy – Proudly sponsored by Coopers Photography
It was a brotherly affair at the front of the Junior Max Trophy qualifying session across the eight minutes with Lucas Lichtenberger stepping up to take pole position with a 42.030. It would be just 0.005 seconds separating Lucas and second placed Mitchell Kerrison, with Travis Lichtenberger securing the third fastest time ahead of Reece Cohen and Lewis Hodgson. It proved to be a classic start to finish lead that would result in victory for Lucas Lichtenberger, taking the win by two seconds over Lewis Hodgson and Reece Cohen. Tyler Howard set continued fastest laps before finishing fourth over Travis Lichtenberger and Kiwi Matthew Payne. 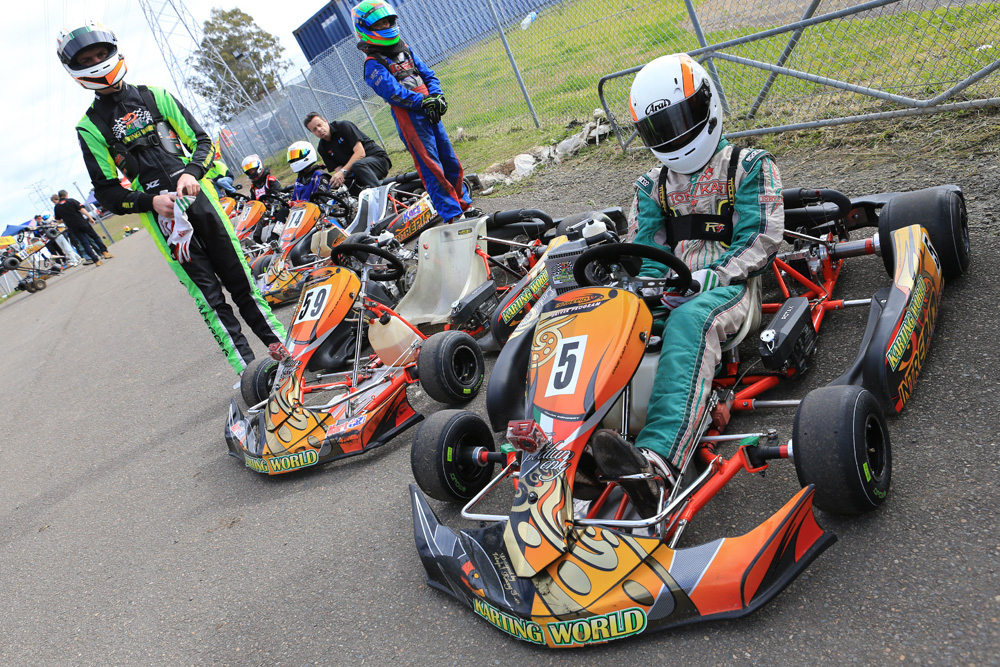 Above: Lucas Lichtenberger was dominant in qualifying and heat one for Junior Max Trophy - Coopers Photography

Junior Max – Proudly sponsored by Direct Management Group
Victorian Reece Sidebottom managed to set the fastest time in the first half of qualifying for the lower 50% of Karts from the final practice session, with his quickest time being a 41.638. Sidebottom’s time transferred him to be 21st overall. Series points leader Zane Morse managed the fastest time outright at the end of the session with a 40.908, fractionally ahead of Kiwi Dylan Drysdale with local Cody Brewczynski securing third with the top three separated by just 0.04 seconds. Kody Garland was fourth overall with Liam Ford fifth and Joshua Car sixth.

The first heat for group A & D in Junior Max was setup to be build the foundations of a strong weekend with Zane Morse starting from pole position, an enthralling battle was established early before Kody Garland broke through the lead and the eventual victory with Morse settling for second. Timothy Colombrita took a narrow third place finish over Kyle Bonser with Liam Ford in fifth and New Zealander Kaleb Ngatoa in sixth. A momentum building opening heat race for Kiwi Dylan Drysdale saw him take the win for group B & C, finishing ahead of Joshua Car in second with practice pace setter Cody Brewczynski in third. Alec Morse moved through to claim fourth with South Australian Joshua Denton in fifth and Thomas Hughes sixth. 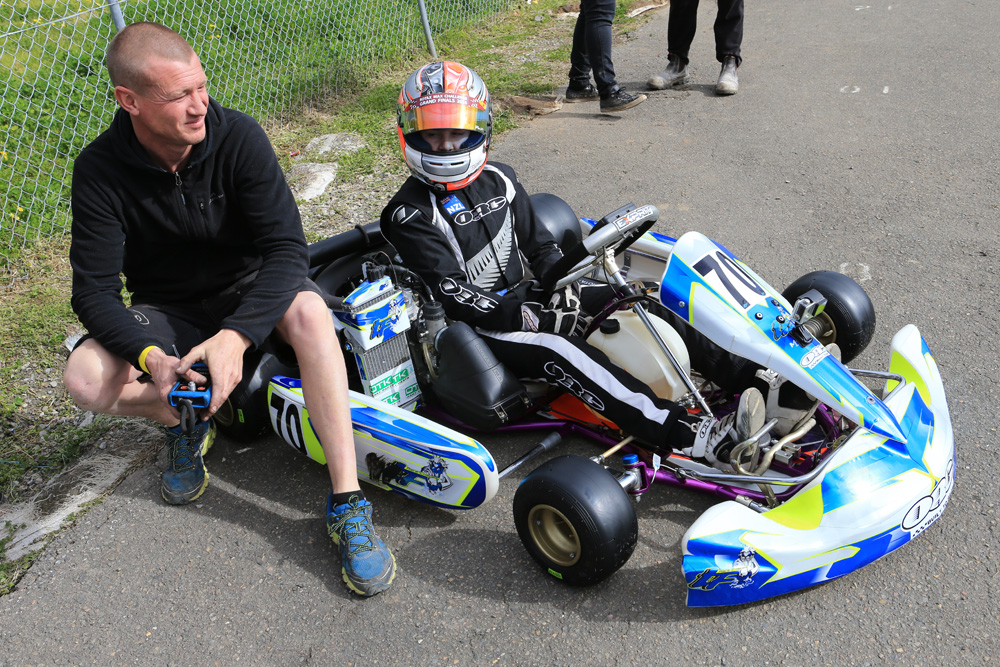 Rotax 125 Light – Proudly sponsored by TF Race Engines
A quickest time on the final lap of qualifying for Mitchell Hewitt saw the Sydney driver snatch pole position with a 50.526 over Nicholas Andrews who would start alongside Hewitt for the heat races. Victorian Daniel Rochford made an impressionable start to the weekend, qualifying third over fellow statesman Blaine Densley with Brad Jenner and Jack Richardson in fifth and sixth. A close battle between Rochford and Hewitt highlighted a busy opening heat race with Daniel taking the win over Mitchell. Alex Waters finished in third, just ahead of Pierce Lehane who drove from 16th to take fourth. Thomas MacDonald and Matthew Lopino rounded out the top six.

Another close battle at the front in heat two saw multiple lead changes throughout the twelve lap race, though it was Nicholas Andrews who crossed the line to take the win after starting second. A post-race penalty of ten seconds for a starting infringement relegated Andrews down the order, elevating Pierce Lehane into the win after starting 16th ahead of Daniel Rochford from Mitchell Hewitt, Alex Waters and Thomas MacDonald. Another stunning performance from Lehane in the third and final heat earnt him his second victory from three starts, finishing just ahead of Rochford with Brad Jenner leading home a competitive pack in third, while Nicholas Andrews finished fourth ahead of Mitchell Hewitt in fifth. 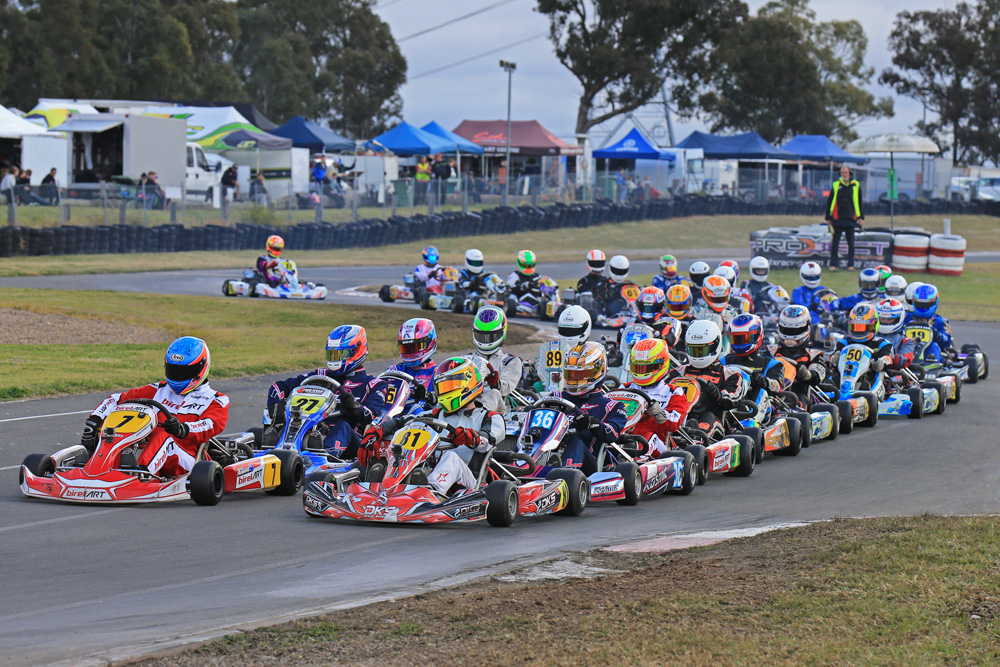 Above: A capacity field in Rotax Light provided plenty of close racing through the heat races - Coopers Photography

Rotax 125 Heavy – Proudly sponsored by Praga Australia
Queensland’s Clem O’Mara took a close pole position in Rotax Heavy, setting his fastest time of a 51.194 towards the end of the session ahead of Craig Stauner. Regan Payne achieved third, sharing the second row with Corey Lean who would start fourth just ahead of Benjamin Ritchie and Scott Simpson. A dominant performance for O’Mara through the first twelve lap heat race saw him go on to take the win by 3.8 seconds over Stauner with Payne and Lean taking third and fourth respectively in a mirror of the qualifying results, likewise Ritchie finishing fifth and Simpson sixth.

Starting from second, Craig Stauner picked his way through to the lead, opening a gap of two seconds during the second heat race to take the win ahead of Regan Payne. A post-race penalty resulted in exclusion for Stauner, promoting Payne to the win. Benjamin Ritchie worked his way up the order to finish third ahead of Clem O’Mara and Scott Simpson in fifth. Following his consistent performances earlier in the weekend, Regan Payne broke through to take his second race win of the weekend in heat three. Corey Lean stepped up to take a comfortable second place from Craig Stauner and Scott Simpson with Chris Farkas recording his first finish inside the top five for the weekend. 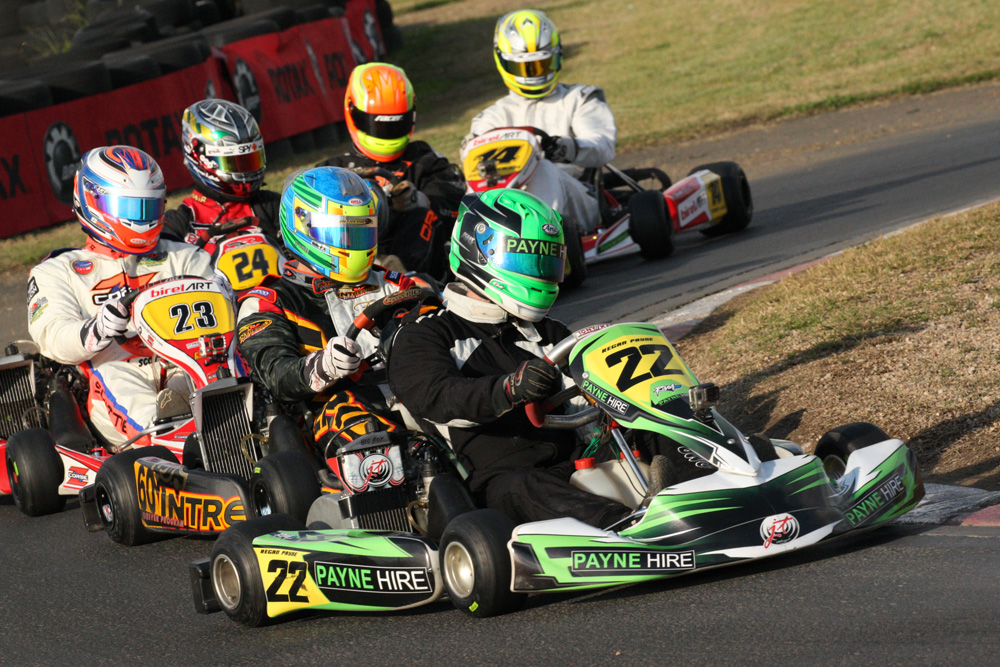 Above: Regan Payne will start in pole position for the Rotax Heavy pre-final - Coopers Photography

DD2 – Proudly sponsored by KartSportNews.com
Jason Pringle asserted his top two placing in the series standings, qualifying on pole position in DD2 with a 49.662 ahead of Ryan Kennedy, setting up a return to the battle that the pair were engaged in at the Albury Pro Tour event. Reagan Angel achieved a career best qualifying result in DD2 as part of the Pro Tour in third, starting alongside Jordan Boys in fourth with Tristan Ellery also achieving his best result to date with fifth and Callum Walker sixth. A battle between Pringle and Reagan Angel headlined a fierce opening heat race with Angel managing to breakthrough and take his first win since joining the category, eventually establishing a gap to Pringle of 1.8 seconds. Kyle Angel worked his way through to take third over a hard charging Kyle Henry-Smith in fourth with Josh Drysdale in fifth and Ryan Kennedy sixth. A post-race penalty of five seconds was added to the time of Henry-Smith.

The roles were reversed at the front of the DD2 field in heat two with Jason Pringle stepping up to take the win over Reagan Angel. Ryan Kennedy delivered a consistent performance throughout the twelve lap event to consolidate himself into a comfortable third position from Tristan Ellery in fourth on the back his DNF in heat one and Adam Lindstrom in fifth. Another commanding performance from Pringle in heat three earnt him the victory by 1.6 seconds over Jordan Boys who managed to secure his best finish of the weekend to date. Reagan Angel continued on his successful start to the weekend by taking third over Josh Drysdale and Ryan Kennedy. 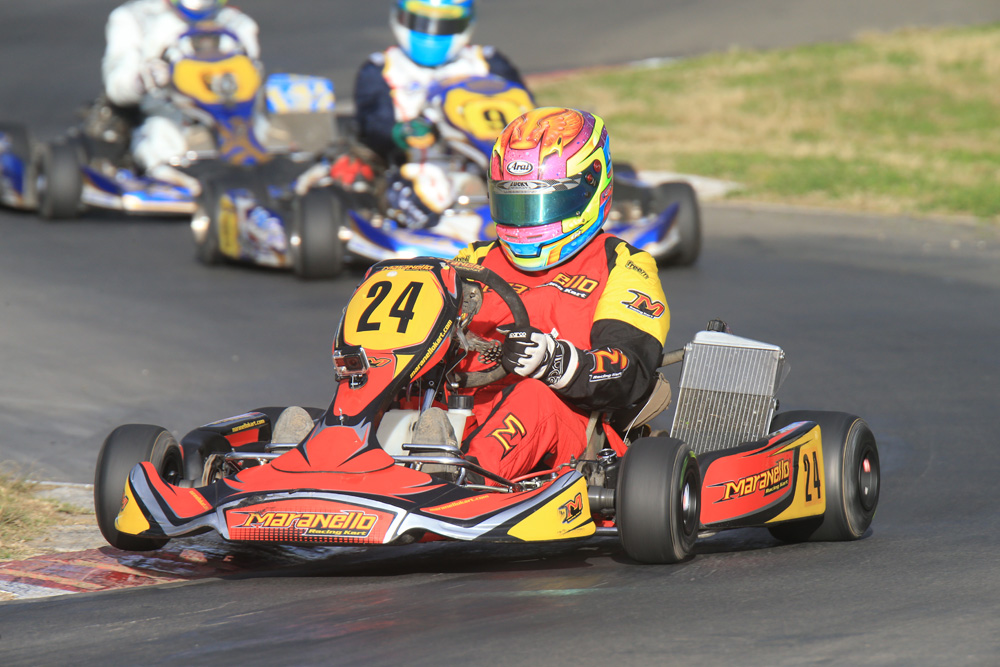 Above: Reagan Angel took his first win in DD2 in the heats - Coopers Photography

DD2 Masters – Proudly sponsored by Chelgrave Contracting
Entering the round leading the series points, Victorian Daniel Richert managed to secure pole position on his penultimate lap in qualifying with a 51.393 on a drying circuit. Up until Richert’s time, Christopher Board was in provisional pole before settling for second with Albury’s Danny Wright and Queenslander Klinton Hancey sharing the second row ahead of Jason Hryniuk and Dean Wanless. Richert displayed an unstoppable performance in heat one, opening up a 5.2 second lead by the completion of the race, taking the win over Hryniuk who moved up from fifth. Kiwi Aaron Cunningham came through from seventh to finish third ahead of Hancey with Ryan Rannard rounding out the top five.

An enthralling battle for the lead developed throughout heat two between pole sitter Daniel Richert and a hard charging Jason Hryniuk who set the fastest lap of the race on his way to briefly holding the lead before settling for second. Klinton Hancey lead from lap one before moving back to finish third from Aaron Cunningham and Adam Hunter. A breakaway from Richert was enough to secure the Victorian the race win though the remaining places inside the top four changed on multiple occasions with Danny Wright stepping up to eventually take second from Hunter with Jason Hryniuk and Tony Bregonje rounding out the top five. 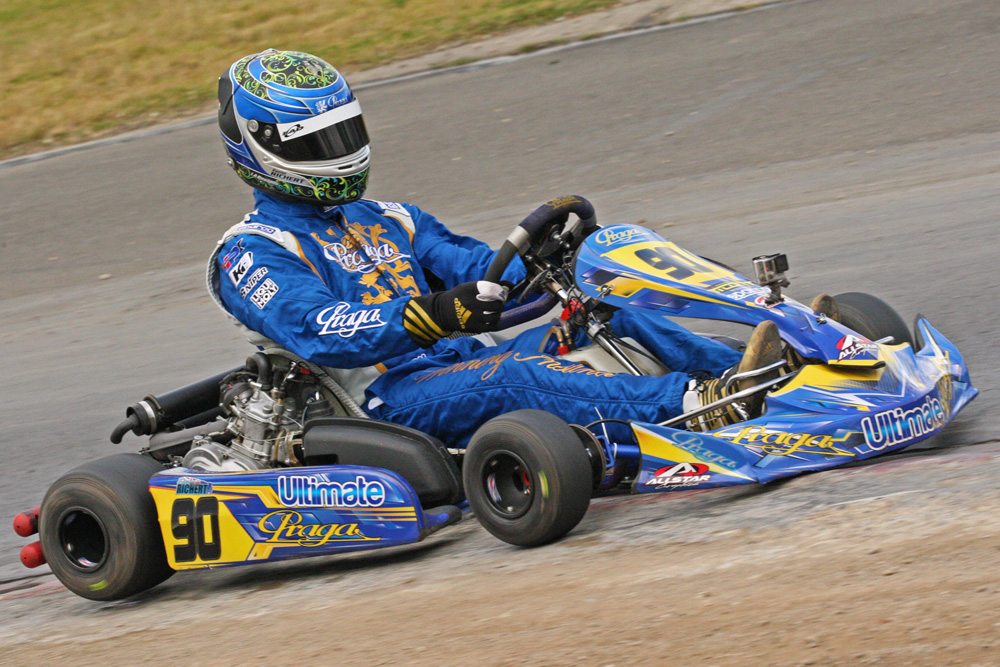 Above: Daniel Richert displayed a commanding performance in the opening races for DD2 Masters - Coopers Photography 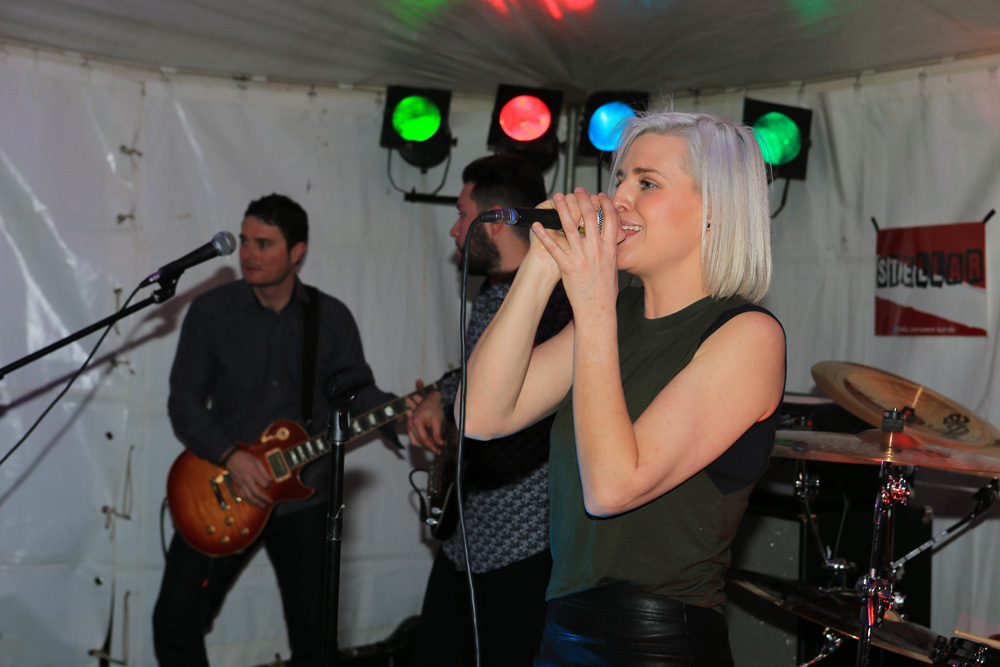