A "round-the-outside" pass by Mitchener on the last lap burried the Finish Driver Antti Ollikainen's chances of fighting back for a shot at the World Title, securing an emotional victory for the Victorian who dedicated the win to his late Mother.

Fellow Aussies Kris Walton and Scott Howard also had an incredible DD2 Masters Final race, both starting outside the Top 20 to drive through to finish 5th and 9th respectively.

In addition, Team Australia also celebrated finishing 3rd in the Nations Cup as well as winning the Team Contest thanks to everyone back home who supported and voted for Team Australia!

A full wrap of Team Australia's results will follow shortly. 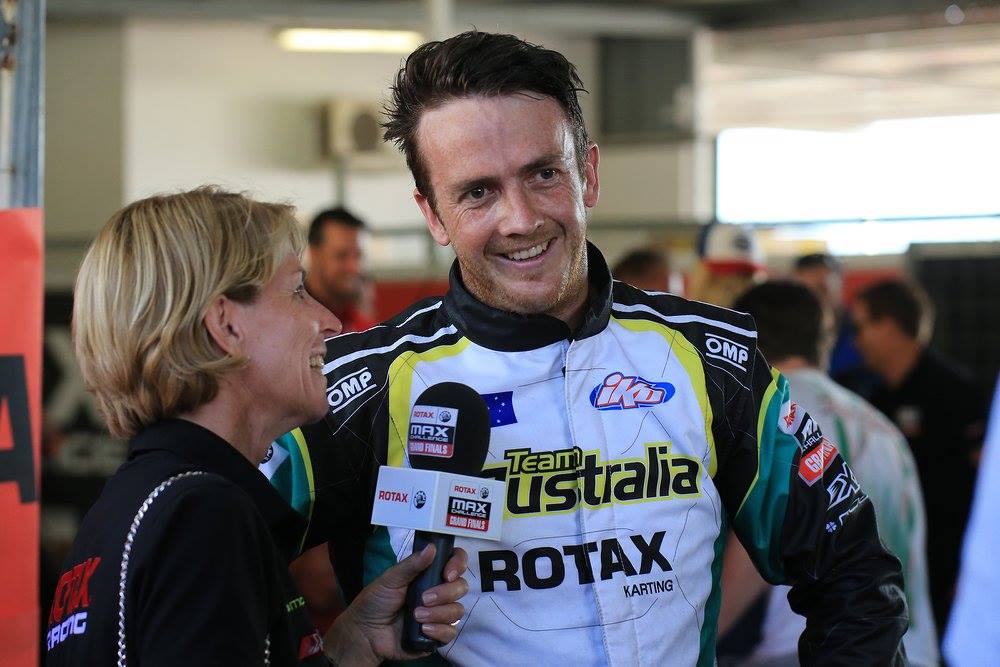 Above: Winners are grinners! Lee Mitchener being interviewed after the race by Jen Wade
Pic - Coopers Photography 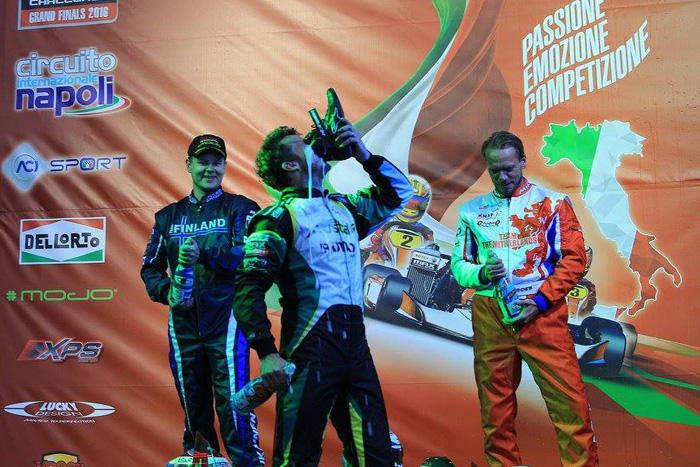 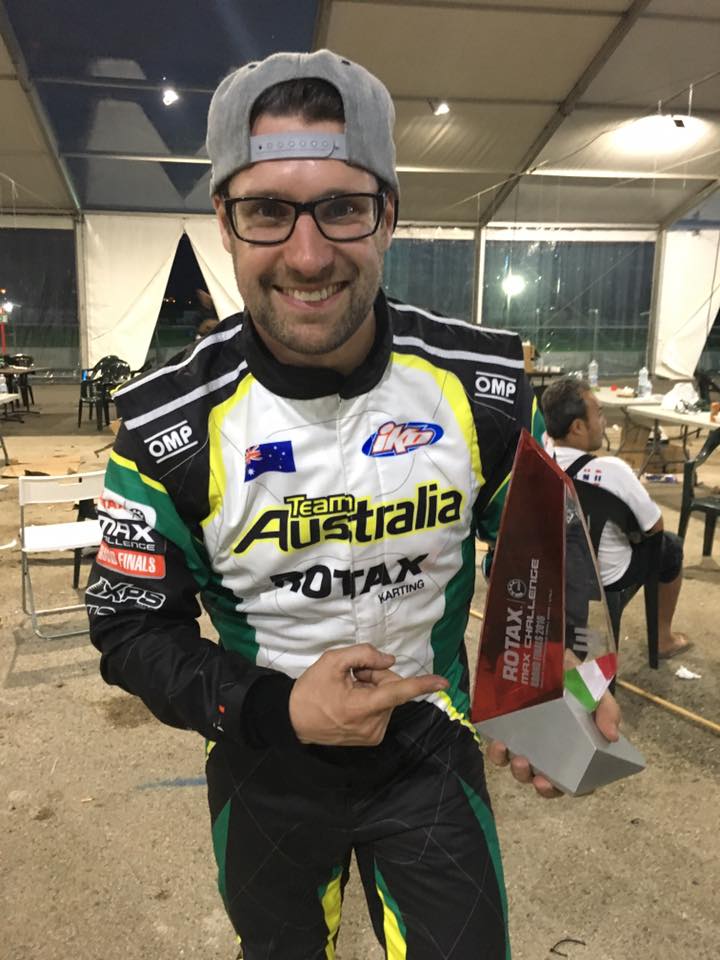 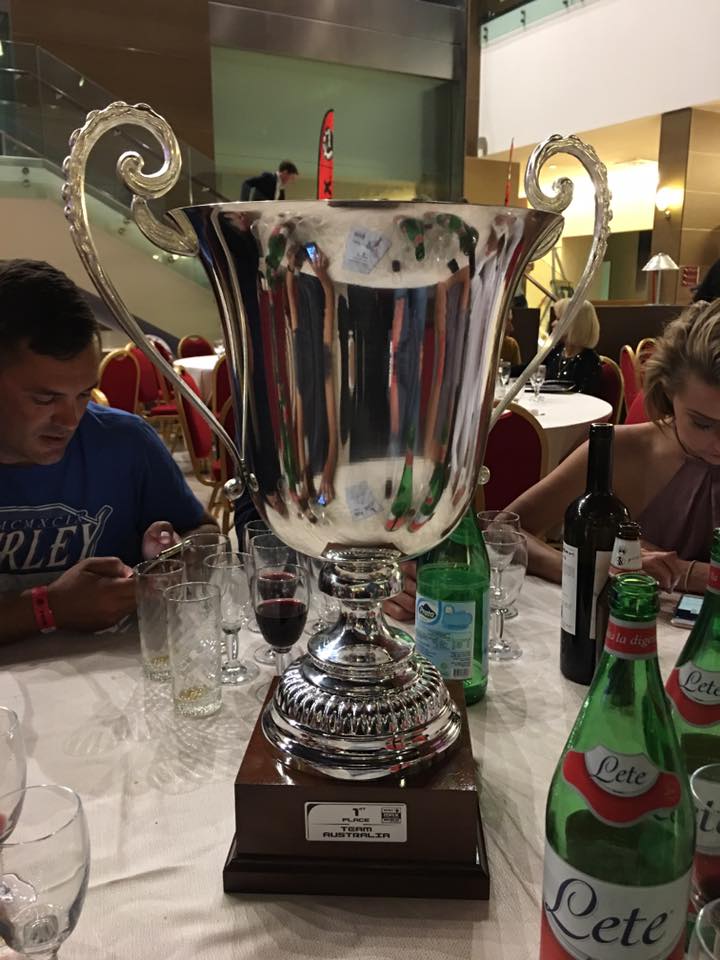 Above: Team Australia wins the Team Contest on Facebook! Thanks to everyone who voted!
Pic - Scott Howard/Facebook

Sarno, Italy, October 22, 2016 – Good morning and welcome to the final day of the Rotax MAX Challenge Grand Finals 2016! Although it is exciting to see how the final races of the day pan out, it is also sad because another Grand Finals event has come to a close.

The weather forecast called for 14°C / 57°F and sun – a relief to drivers and mechanics alike, who were looking for drier conditions.

Saturday’s race schedule consisted of one morning warm-up session and a final race in addition to the driver’s party, which will be held at the Hotel Golden Tulip Plaza in Caserta. 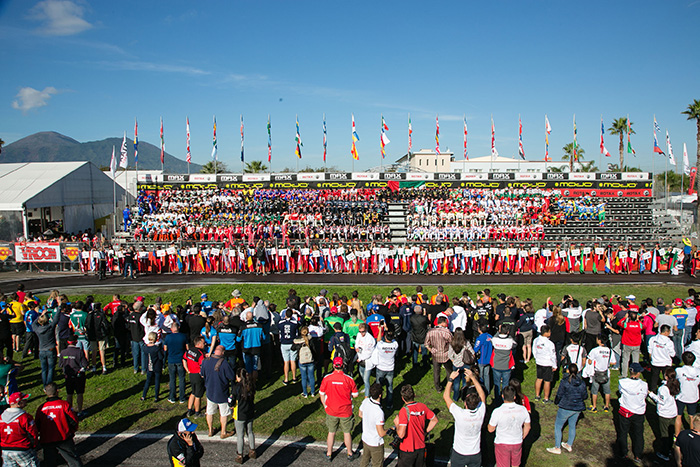 125 Micro MAX Final
What a fantastic race to watch as the youngest drivers of the series stormed out, on the track, to race against against one another! The top 5 drivers broke away from the pack, pushing each other down the straight to gain a little distance from the rest of the field to begin fighting among each other during the middle of the race. Initially, it was the American James Egozi who lead a pack of 5 drivers, however, he did not stay at the top spot for long, as Egozi was passed by a train of drivers on the main straight. However, the action truly heated up on the last lap, with the top 5 drivers battling for the top spot of the podium passing in literally every turn until the finish line. Without doubt, it was the the American Diego Laroque who claimed the victory, crossing the finish line with roughly a one tenth gap over the Portuguese Adrian Malheiro. The two teammates from the Netherlands, Robert De Haan and Kris Haanen finished in third and fourth, respectively. Egozi, the previous race winner, rounded out the top 5. 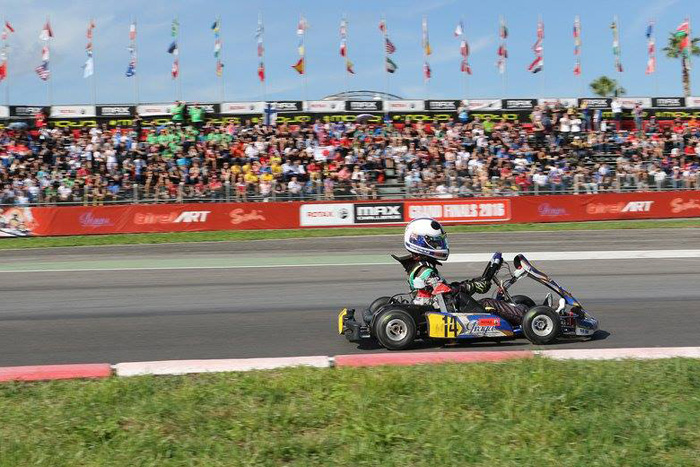 125 Mini MAX Final
Thankfully, the start of the race proved to be clean, with one minor crash toward the back of the pack in turn two. Right from the beginning of the race, it was the Canadian Thomas Nepveu who broke away from the field, creating a sizeable gap for himself. However, this gap was not to last for long, as a group of three drivers teamed up and drafted up to Nepveu, overtaking him on the straight with the additional speed they were able to gather by teaming up. During the first quarter of the race, it was the South African Jayden Els who overtook the Canadian and was able to drive away with more than a second gap over second place by the end of the race. But the action didn’t stop there. Luka Nurmi of Finland and Victor Bernier of France drafted up to Els, passing Els at the end of the straight on the very last lap. This is where the top three drivers started passing each other corner after corner, vying for the top spot of the podium. What they didn’t pay attention to, however, was that fourth placed Nepveu, although roughly half a second back, was lurking in the background, consistently driving lap times, ready to pass at any opportunity. That opportunity happened roughly three turns before the start / finish line, where Nepveu not only passed for third but also for second from a considerable distance back. Ultimately, Els won the race with a fantastic 1 second gap over Nepveu. The Canadian finished 2 tenths ahead of Nurmi, who in turn finished 8-hundredths ahead of Bernier. What a great, clean race to watch! 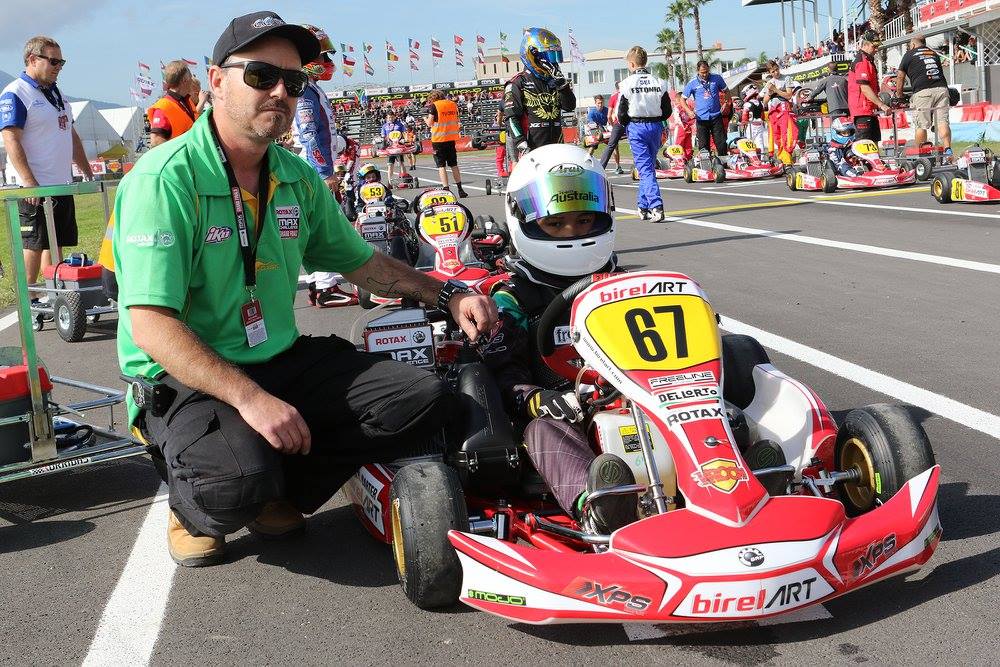 Above: Hugh Barter with Clint Cathcart on the Mini Max grid. Hugh went on to finish an incredible 8th place in the Final
Pic - Coopers Photography 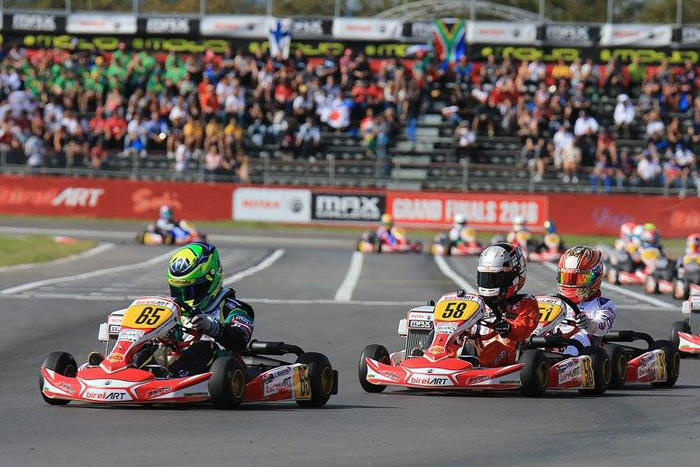 Above: James Wharton can be proud of his efforts finishing 15th in the Mini Max Final
Pic - Coopers Photography

125 Junior MAX Final
Surprisingly, the Junior MAX final race was very clean at the start as well as throughout the race. One could immediately identify the top runners of the field; as they broke away from the rest of the pack. The leader, the Italian Marco Settimo first broke away from the field around mid race, however, the Mark Kimber of England slowly began reeling in Settimo throughout the race. It looked as if it would be a very exciting last few laps, as Kimber’s lap times were roughly 2-tenths faster than the leader’s every lap. The last few laps saw the battle of the race to truly lie between Settimo and Kimber. However, the Italian kept his cool and was able to hold off Kimber lap after lap, corner after corner. Kimber did try to outbreak Settimo in the last lap of the last corner, however was unsuccessful, so Settimo threw up his hands in the air as he crossed the finish line, greeting sweet victory! Kimber finished in second place, roughly 2-tenths behind Settimo and Kimber’s teammate Johnathan Hoggard rounded out the top 3, more than 8 seconds behind the dueling top 2. 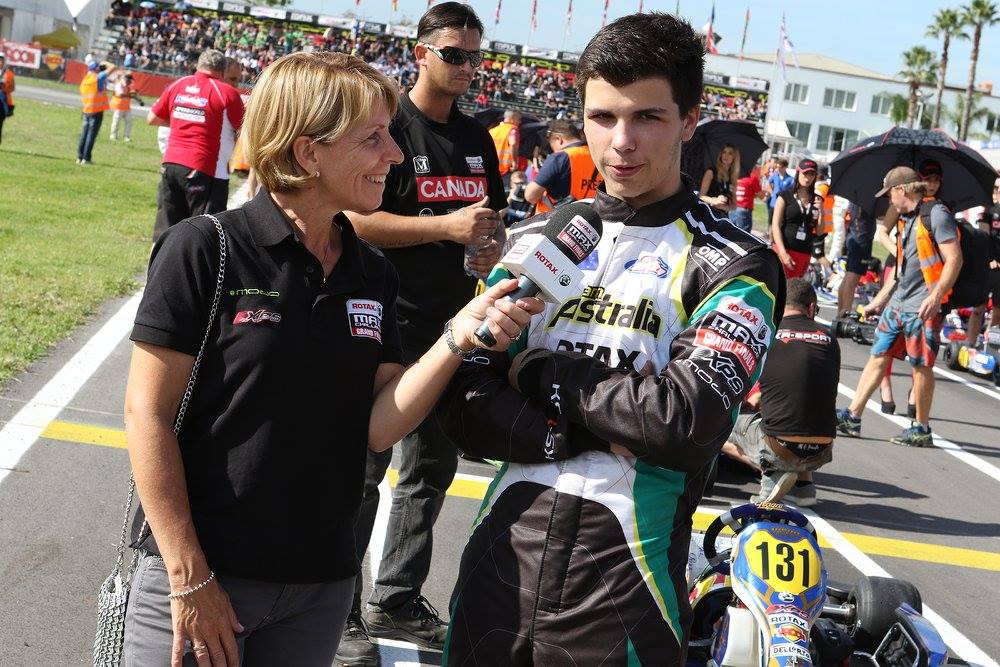 Above: Dylan Hollis finished a credible 14th in the Junior Max Final. Not a bad effort after qualifying 57th
Pic - Coopers Photography

125 MAX Final
The senior drivers proved to be a little more competitive than their junior counterparts, as the final race saw quite a few crashes throughout the pack. However, all eyes were glued to the front of the race, as the Russian Denis Mavlanov and Adrien Renaudin of France lead the way into turn one. Renaudin was shuffled back a few positions in the first few corners, however, was able to fight back and remain in second place. For the majority of the race, the top ten drivers were all lined up, racing within one second of each other, bumper to bumper. As the race leaders neared the end of the 20-lap final event, it was Mavlanov and Petr Bezel of the Czech Republic who ultimately started fighting for the lead, creating a 2 second gap or so to the third placed Berkay Besler of Turkey. Renaudin had been shuffled back again, and was actually caught up in a crash a lap before the checkered flag. Mavlanov, nevertheless, kept his head down and remained focused throughout the race, even when some drivers attempted to make advances to pass for the win. The Russian pilot ultimately won the final race by more than 1.5 seconds in front of Bezel. Besler rounded out third place. Mavlonov unfortunately did not finish the week as he had originally hoped, as he was shuffled back and ultimately finished in sixth place.

Above: In Senior Max Cody Gillis battled for 3rd and 4th right up until the last lap, before contact dropped him back to 13th. Post race penalties saw the Aussie officially classified as 9th!
Pic - Coopers Photography

125 MAX DD2 Masters Final
The start of the race proved to be clean, with just one driver being pushed wide and heading off track. The top four drivers, however, remained racing bumper to bumper, lap after lap, until roughly lap 7, in which the Canadian Scott Campbell and the American Luis Schiavo ran into each other, under passing, causing Schiabo to be eliminated from the race and Campbell to drop down to 32. The lady of the race, Tiffany Chittenden, finished in 11th position. A battle at the top of the grid ensued between the “Flying Dutchman” as the official announcer, Ken Walker, has dubbed Dennis Kroes of the Netherlands, and Antti Ollikainen of Finland. However, roughly halfway through the race, it was Antti who took the lead away from Kroes, pulling out just a 2-tenth gap. Kroes continued falling back as the race progressed, as the Australian Lee Mitchener passed Kroes for second place. 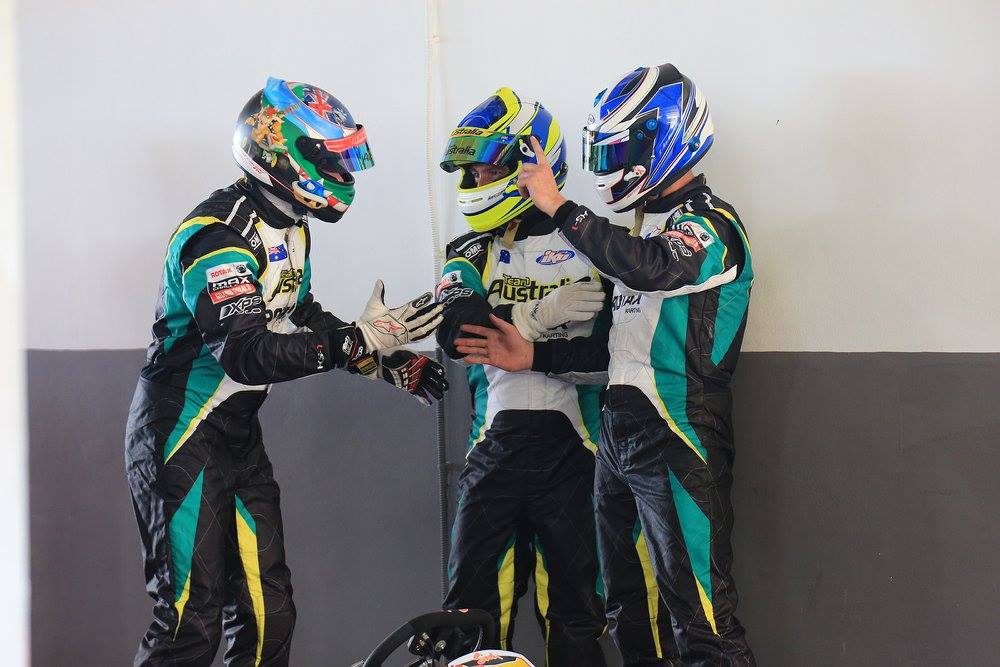 125 MAX DD2 Final
What an absolutely fantastic race! The start of the race saw Josh Hart of New Zealand take the lead away from the Hungarian driver, Ferenc Kancsar. Ferenc actually ran in second place for quite a while, as he tried putting pressure on Hart. Eventually, the former Grand Finals champion did pass. Throughout the middle of the race, Kancsar actually worked himself up to first place, closely followed by Christian Sorensen of Denmark. Sorensen consistently was about 1-tenth faster than the leader, but he played his race smart. Instead of passing right away, Sorensen stayed behind the Hungarian, patiently waiting for his chance to pounce and pass. Since Sorensen remained behind Kancsar, the two pushed each other away from the rest of the pack, which included third placed Simas Juodvirsis of Lithuania, who was trying to catch up to the front runners of the race. The last two laps of the race were, as some would say, the most exciting. Sorensen made several passing attempts on Kancsar who tactfully blocked the driver from Denmark. Everyone’s eyes were glued to the last corner in the last lap, wondering if Sorensen would make a move… although he did try, Kancsar kept his cool, held him off, and ultimately won his second consecutive Grand Finals Championship! 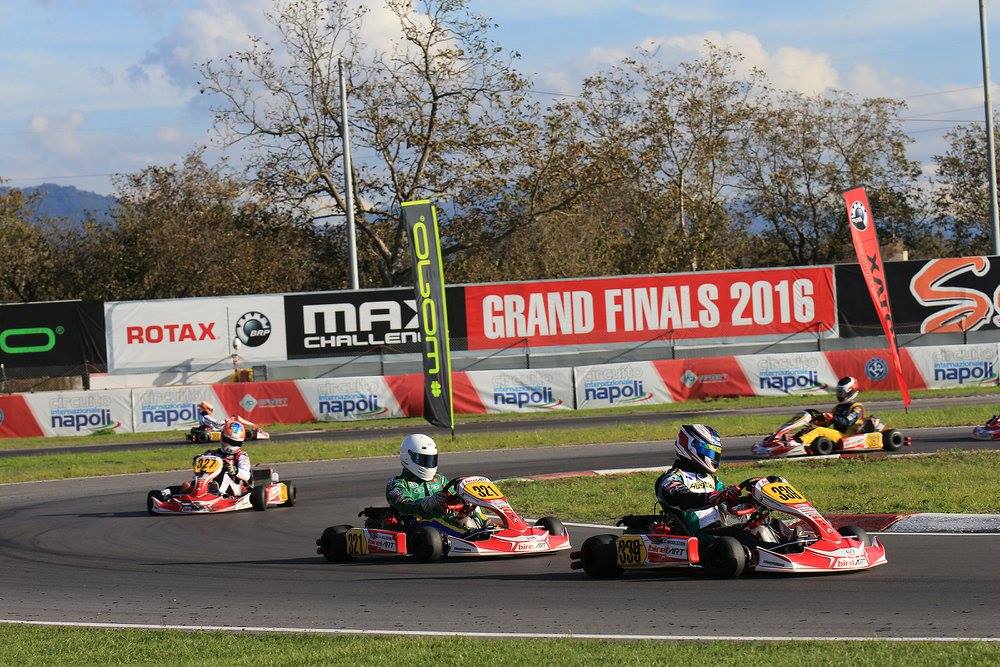 Above: Troy Woolston finished 20th on track in DD2, but was unfortunately excluded from the Final
Pic - Coopers Photography

The past week’s on-track action has seen phenomenal drivers battle for the top position of the podium. With four Rotax MAX Challenge Grand Finals Champions crowned and two national championship winners crowned in the Micro and Mini MAX classes, the 2016 racing season is officially coming to an end. Teams and drivers will be given a fresh opportunity to work toward a successful 2017 year and have the possibility of qualifying again for the prestigious Rotax MAX Challenge Grand Finals.

BRP would like to thank everyone again for a making this such a spectacular week and for coming together and celebrating the 17th anniversary of the RMCGF. We hope to see you next year!

**Please note these results may not yet be official. Click here for all Race Results