In an Australian Karting first, the Rotax Pro Tour has altered the traditional race format adding extra interest to an already exciting battle for crucial Rotax rankings points with three events remaining in the season. While local experience helped many, the ability to manage qualifying on worn tyres proved crucial for success with three races remaining in the weekend.

The third hosting of the Jason Richards Memorial provided the opportunity to recognise a driver for their commitment and determination to succeed and to continue to exhibit a positive attitude toward their racing. Queensland’s Steve Ellery was awarded the Jason Richards Memorial which was overwhelmingly supported by all associated with the series.

DD2 Masters
Geelong local Daniel Richert showed his track knowledge in the DD2 Masters qualifying session by securing pole position over Albury’s Danny Wright. Current rankings leaders Hamish Leighton and Adam Hunter would share the second row together, with Joshua Willett and Tony Bregonje making the third row. Richert continued his strong form by taking victory in heat one and two, finishing ahead of his front row partner in Danny Wright in the first race. Adam Hunter improved from his qualifying position to take third with Leighton in fourth and Willett in fifth. Hunter improved further in the second heat, finishing behind Richert who took the win. Hamish Leighton improved in the second heat to finish third from Tony Bregonje in fourth and Jose Ruiz in fifth.

Daniel Richert continued his run of form in the first of the finals by taking victory over Adam Hunter. The top three from heat two was mirrored in the final, with Hamish Leighton finishing third. Danny Wright improved from his 11th place finish in the second heat to take fourth in the final while Joshua Willett maintained his consistent form to secure fifth. With qualifying for Sunday’s racing being held following the final, it provided a challenge for the drivers to manage their tyres and secure a quick time with two 14 lap heats remaining ahead of a 22 lap final. Following on from being awarded the Jason Richards Memorial, Steve Ellery took pole position over Danny Wright and a late charging Joshua Willett. Mark Domaschenz improved from his early weekend form to qualify fourth ahead of Tony Bregonje. 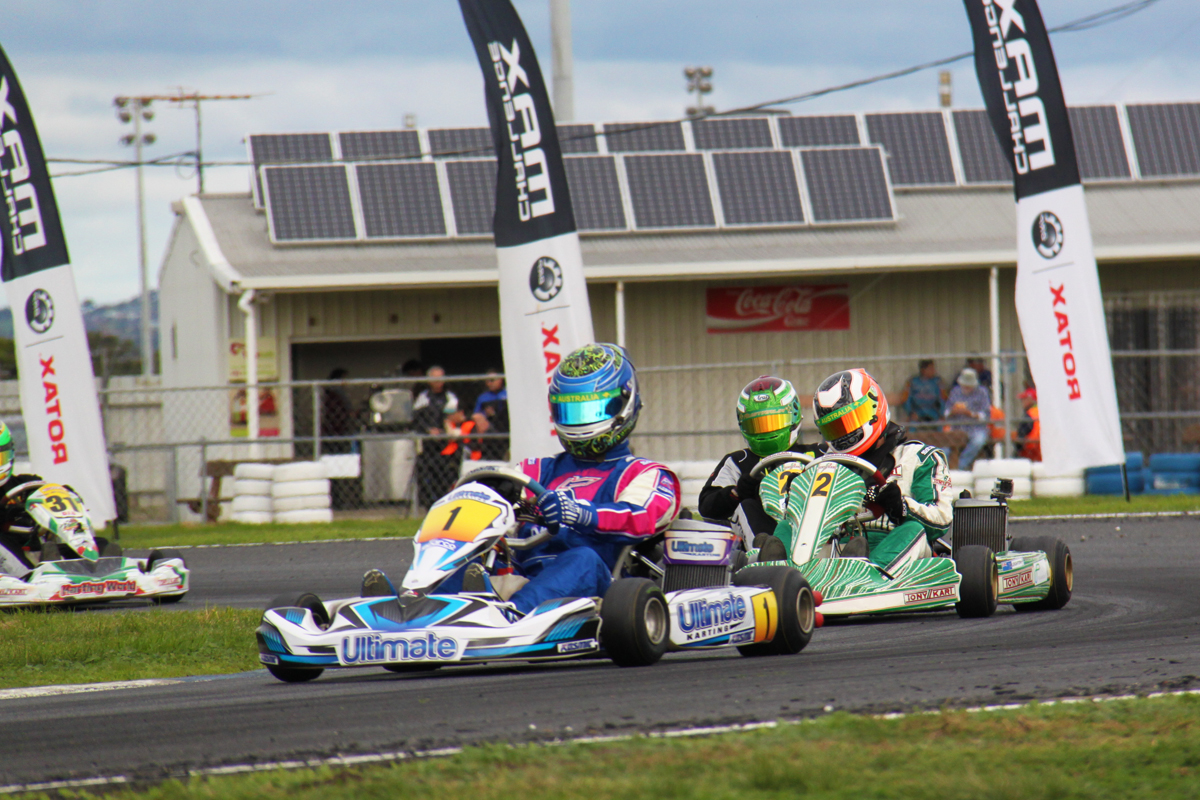 Rotax Heavy
Victorian Paul Rodgers was the quickest of the Rotax Heavy field in the opening qualifying session, with fellow statesman Dylan Collett joining him on the front row for the two heat races. Rick Pringle took third on the back of his successful form at the Geelong track last year, with Scott King taking fourth and Jack Woodfall fifth. Rodgers continued his early weekend form to take the victory in heat one over Pringle who traded places with Collett from their qualifying result, while Scott King held onto fourth, James Reid improved to take fifth. After his third place finish in the opening heat, Dylan Collett stepped up to take victory in the second heat with Paul Rodgers settling for second over Rick Pringle. Scott King continued his run of fourth place finishes, with Jack Woodfall improving to fifth.

Rick Pringle stepped up in the first of the finals to take the victory from heat two winner Dylan Collett. Jack Woodfall capitalised on his consistency to secure third and score a healthy bank of round points, with Scott King again taking fourth from South Australian Brandon Stillwell. On the back of his success in the first qualifying session, Paul Rodgers again returned to the top of the time sheets and will start from pole position alongside Dylan Collett. The winner of the first final, Rick Pringle will share the second row with Jack Woodfall while Scott King and Brandon Stillwell will start from fifth and sixth respectively.

Sodi Junior Max Trophy Class
On the back of his success at Pro Tour Lithgow, Glen Ormerod again secured pole position in the Sodi Junior Max Trophy Class ahead of Harrison Carr with West Australian Brooke Redden taking third from Chris Bregonje and Lithgow round winner Samuel Dicker. Ormerod backed up from his pole position to take the win in heat one with Harrison Carr finishing second and Brooke Redden third, while Chris Bregonje took fourth in a mirror of the qualifying result. Ryan Pike improved from his qualifying position of seventh to take fifth. Ormerod continued his form to take the win in heat two over Harrison Carr, with Ryan Pike improving further to take third. Brooke Redden and Samuel Dicker took fourth and fifth respectively.

After his success in the heat races, Glen Ormerod took the win in the first of the finals over Ryan Pike and Samuel Dicker. Brooke Redden backed up from his fourth place finish in heat two to mirror that result in the final while Harrison Carr took fifth. Samuel Dicker continued to make improvements throughout the opening day, subsequently taking pole position for Sunday’s heat races over Pike and Ormerod. Chris Bregonje continued his consistent form to take fourth in the eight minute session with Queensland’s Jye Hopkins in fifth. 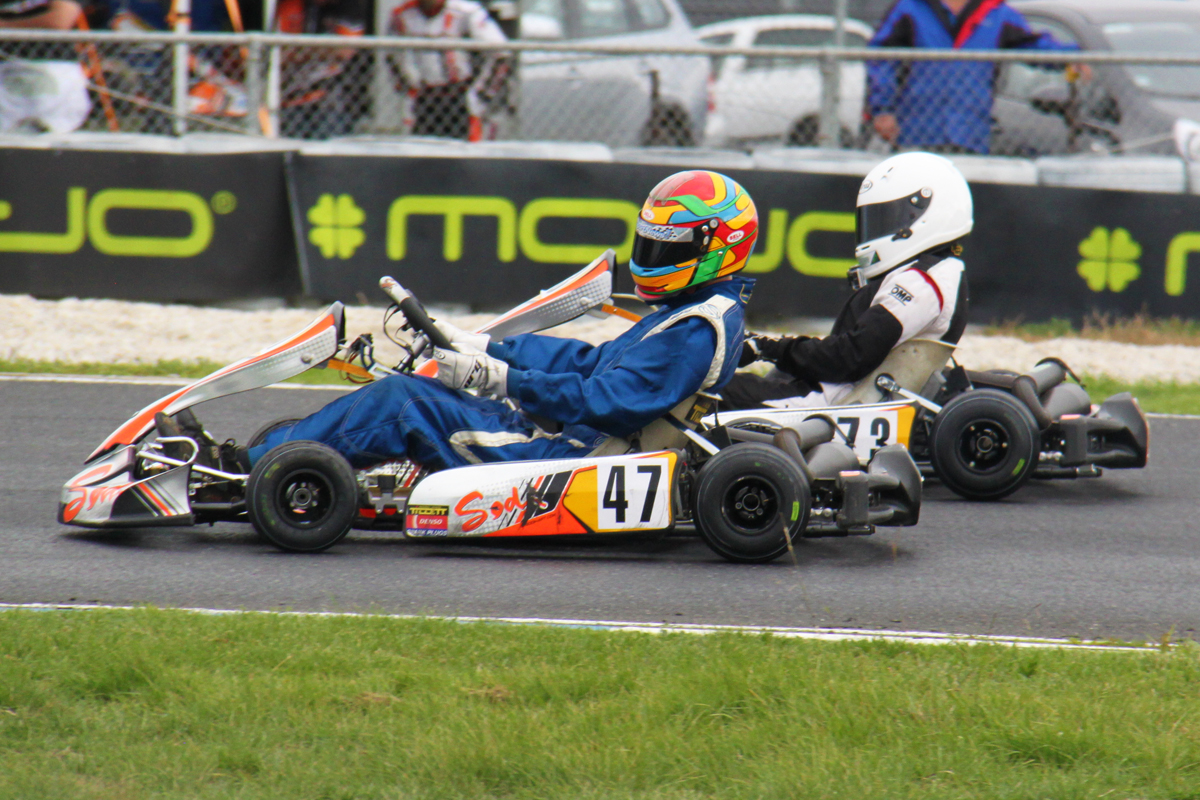 Brad Jenner’s string of race victories continued into the final, taking the win over Ryan Kennedy who stepped up from his third place finish in heat one. Jordan Boys replicated his second heat result to finish third from Liam McLellan and Brenton Mountjoy, with Andrew Carey returning from a DNF in the second heat finish sixth. Jenner’s form progressed into qualifying for Sunday’s races where he took pole position alongside Gold Coast’s Dalton Ellery, with Saturday’s polesitter Jack Richardson qualifying third. Thomas MacDonald and Ryan Kennedy backed up from their race successes to take fourth and fifth respectively in the qualifying session. 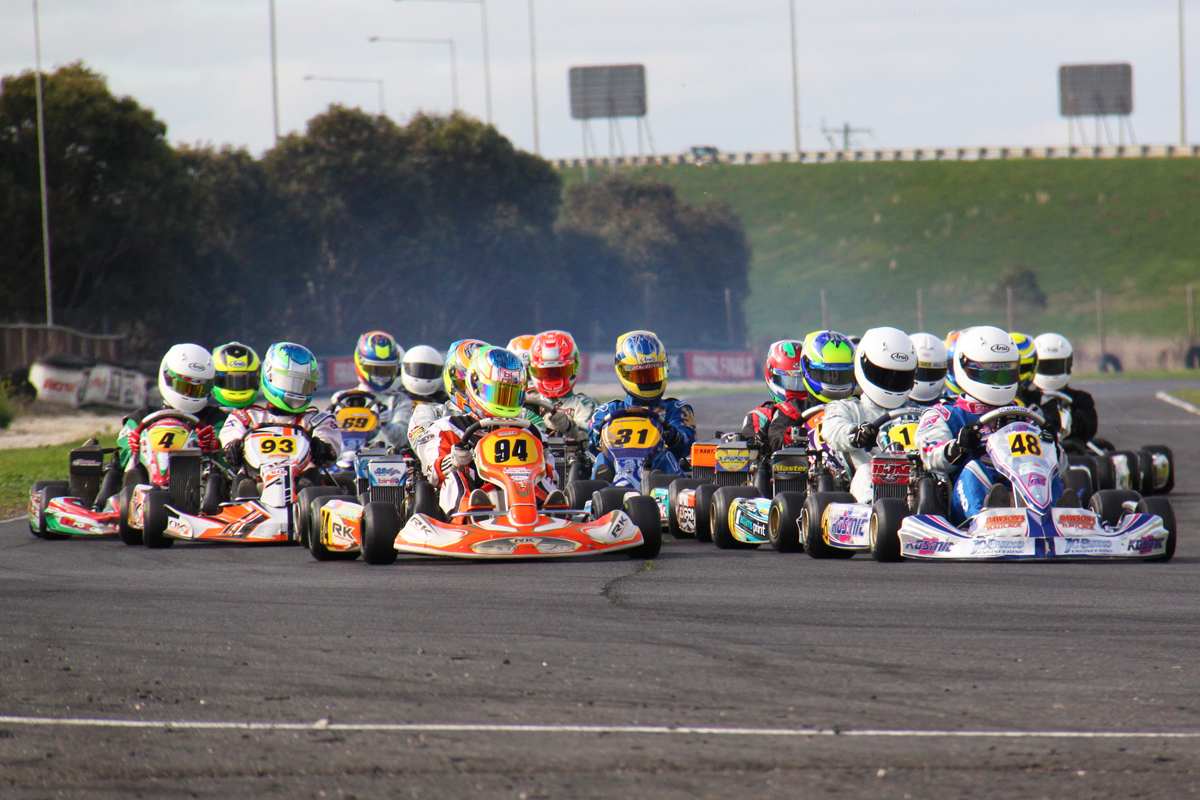 Above: Victorian Brad Jenner will start from pole position in Sunday’s heat races after a successful opening day of racing.
Photo - IKD

After his opening heat race result, Darwin’s Bryce Fullwood took his second victory of the weekend in the Junior Max final, finishing ahead of Victorian Reece Sidebottom and West Australian Jake Kostecki. Aaron Cameron took fourth after his pole position for the heat races, while Zane Goddard improved to take fifth in the 20 lap event. Fullwood’s form from the final moved through to the qualifying session for Sunday’s heat races as he took pole position, sharing the front row with Reece Sidebottom, while Jayden Ojeda secured third and Pro Tour debutant Morgan Feast took fourth, with Thomas Hughes managing fifth. 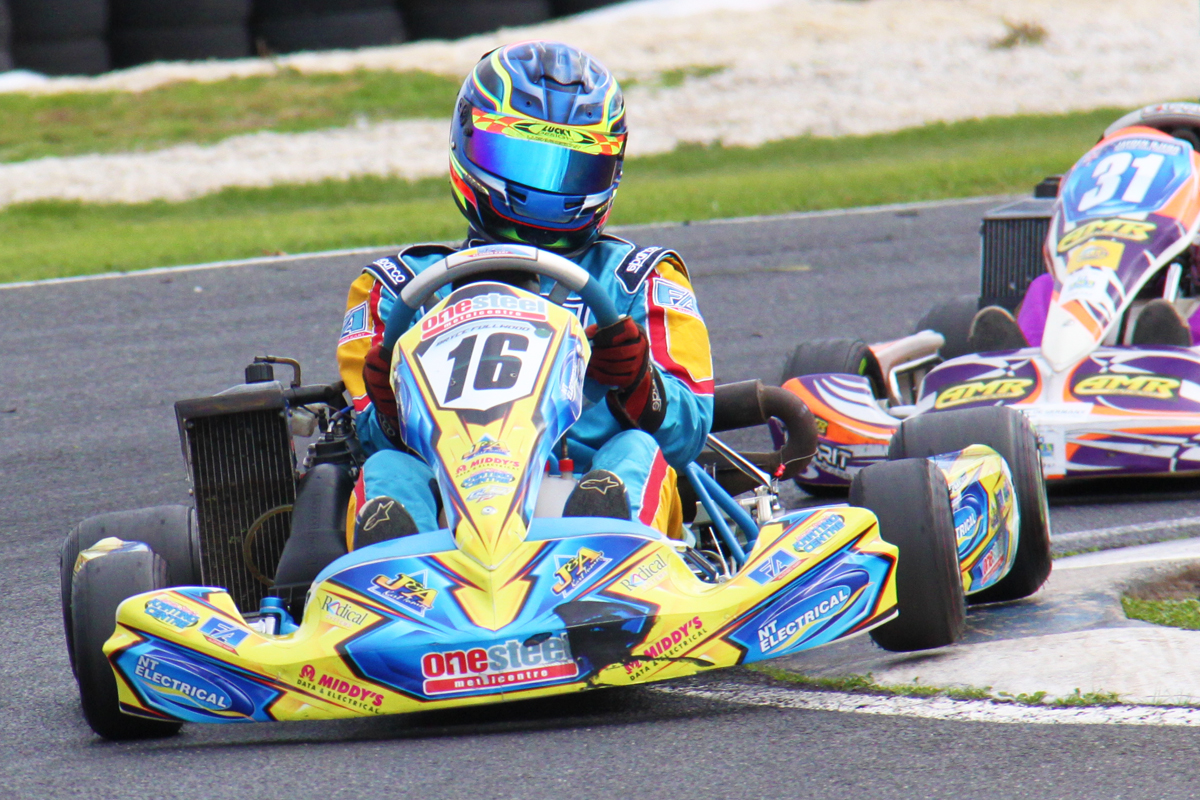 An enthralling DD2 final saw Jordan Boys’ first place performance in qualifying being replicated in the 20 lap event, taking the race victory ahead of Troy Woolston. Michael Stewart’s pace continued to improve, securing third from Damian Ward in fourth and Jason Pringle in fifth. Queensland’s James Macken stepped up to take pole position in the qualifying session for Sunday’s heat races in an eight minute dash that saw numerous changes of position, with Zachary Phillips eventually claiming second to start alongside Macken. Adam Lindstrom managed third with Michael Stewart in fourth and Nathan Taylor in fifth. 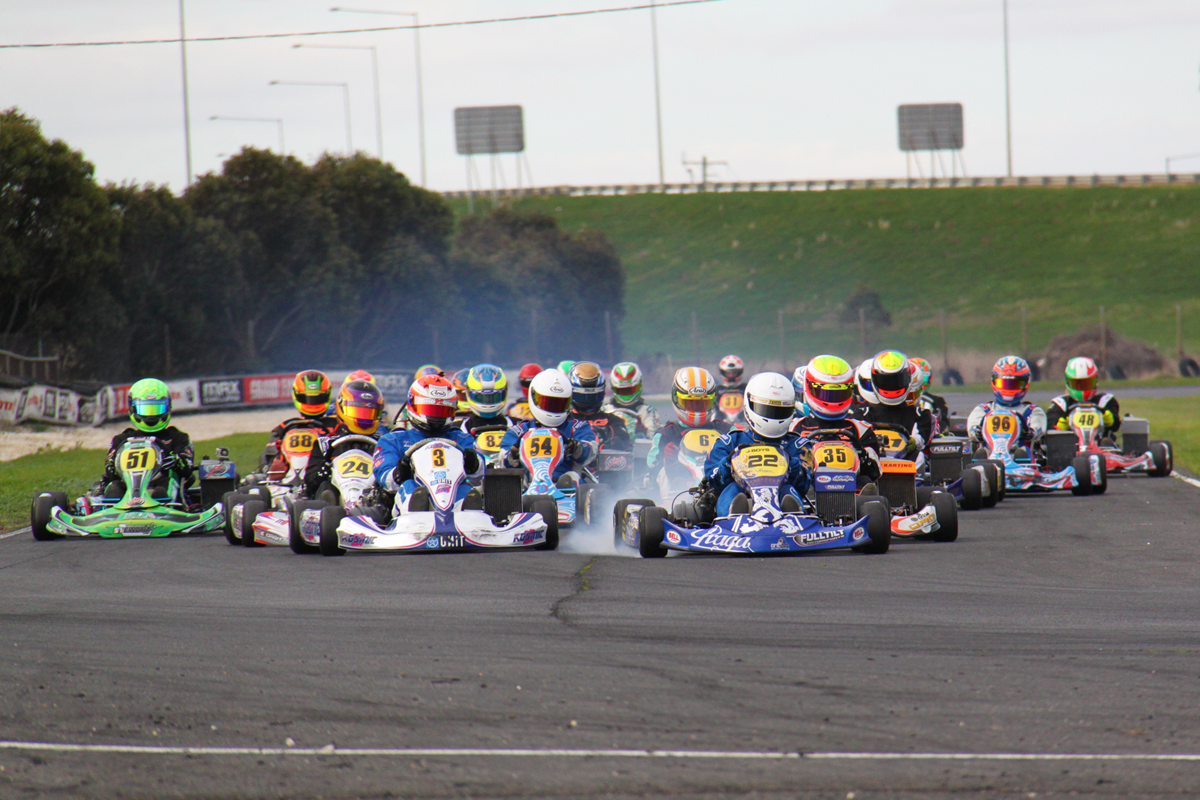 Above: Jordan Boys locks up at the start, but took the win in Saturday’s final of DD2.
Photo - IKD

Sunday’s schedule consists of two 14 lap heat races and one 22 lap final for all categories.
To follow the event online throughout the weekend, Like Rotax Pro Tour on Facebook, Follow Rotax Pro Tour on Twitter and tune into the live audio commentary via Ustream at www.ustream.tv/channel/internationalkarting.