The 2015 Rotax Pro Tour Series has wound up in fine style at the Ipswich Kart circuit with Sunday’s pre-finals and finals staging some of the best racing we have seen all year. The Grand Final results have now determined this year’s Rotax Max Australian Challenge Champions, Queensland State Champions, as well as Team Australia’s 13 drivers that will make the journey to Portimao, Portugal in November to take part in the 2015 Rotax Max Challenge Grand Finals. 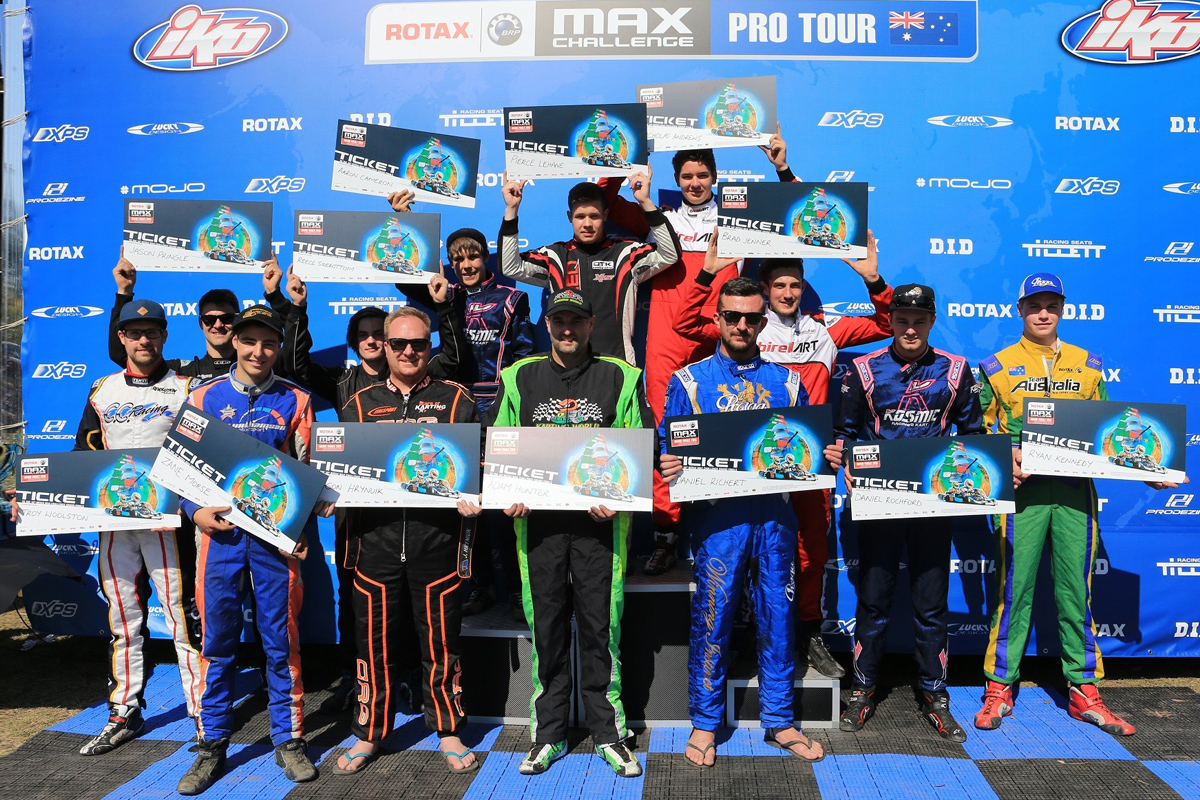 Micro Max
Queensland’s Jack Westbury managed to build on the momentum gained during his win in heat three on Saturday to convert his success into the victory in the pre-final. Westbury involved himself in a battle with pole sitter Marcos Flack for much of the race before taking the win by 0.2 seconds over Flack with Cody Maynes-Rutty stepping up to take a comfortable third over Ethan Feather and Oscar Targett with Ryan Tomsett rounding out the top six.

Both Jack Westbury and Marcos Flack returned to their ongoing battle for the lead throughout the 16 lap final with the pair regularly changing position for the lead, however it would be Flack who would manage to come out on top to claim his first round of the Pro Tour season. Ethan Feather managed to step up and take a confidence boosting third place result ahead of Cody Maynes-Rutty with Oscar Targett again rounding out the top five. 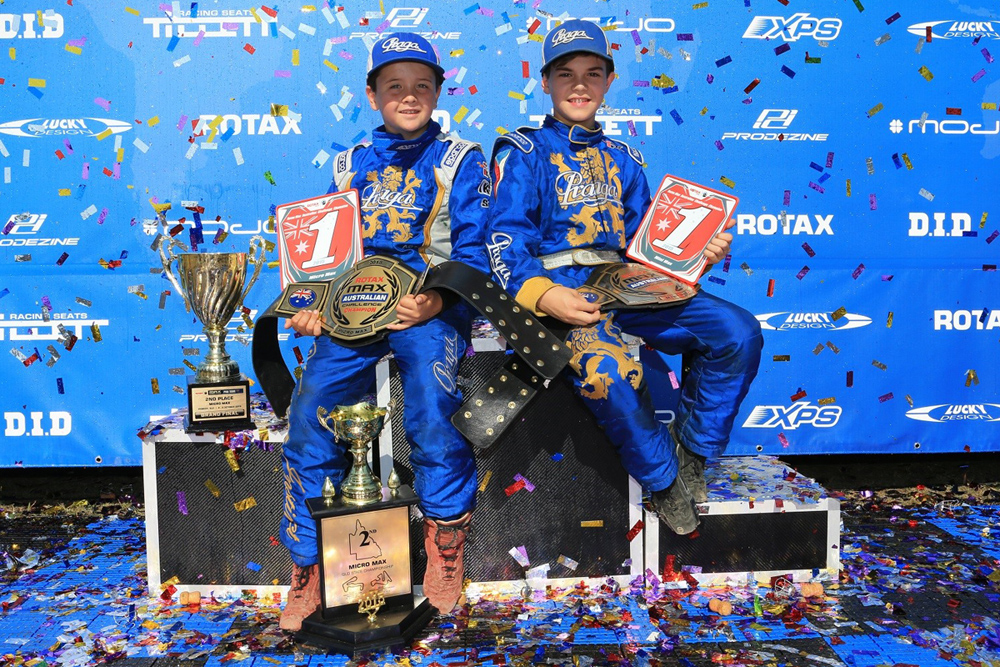 Mini Max
The pre-final for Mini Max proved to be the Bayley Douglas show with the series points leader securing a comfortable 3.6 second win over Jaiden Pope. Douglas set the fastest lap of the race on his way to the win by over 0.2 seconds, setting himself up in the best place possible for another round victory to add to his season tally. Victorian James Wharton showed encouraging speed to work his way to third, finishing convincingly ahead of Luke Pink with Will Harper and Jack Grambauer rounding out the top six.

A blistering start for both Jaiden Pope and Luke Pink left pole sitter Bayley Douglas in third from the first lap of the Mini Max final with both Pope and Pink dicing for the lead in the early stages of the race. Douglas made the most of an opportunity during the mid-section of the race to return to the lead, eventually going on to take the win over Pope with James Wharton stepping up to take his second third place result of the day. Luke Pink managed to finish fourth over Jack Grambauer in fifth for the final podium result. 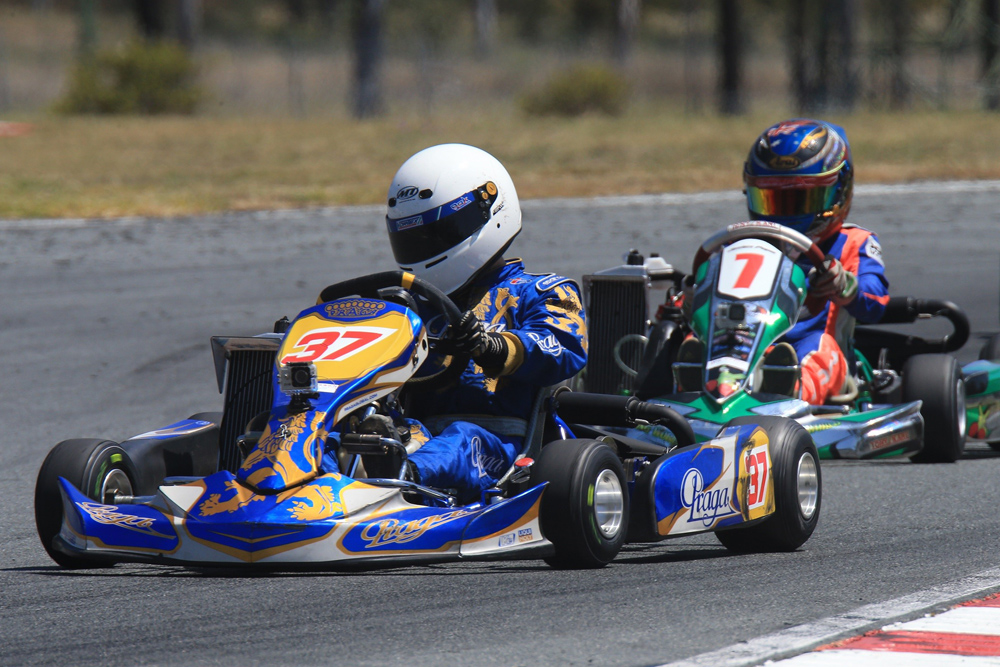 Above: Bayley Douglas wrapped up a successful season claiming the round win in Ipswich and the Rotax MAX Australian Challenge title for Mini Max (Photo by Coopers Photography)

Junior Max Trophy
The battle within Junior Max Trophy right across the weekend proved to be one of country vs. country as New Zealand’s Matthew Payne managed to continue to hold the victories away from Reece Cohen. Payne translated his impressive heat race form into a one second victory in the pre-final, while also claiming the fastest lap of the race with Cohen settling for second. On debut in the class, Bailey Sagaidak showed a clean set of heels to gradually progress himself up the order to pick up third ahead of Lucas Lichtenberger and Jace Matthews with the second of the Kiwis, Jayden Ransley, on debut managing to secure sixth.

Matthew Payne continued his impressionable showing in the Junior Max Trophy category for the Grand Final event by taking a 1.4 second win, handing him the overall round success. Reece Cohen would again settle for second, though he would be rewarded for his efforts across the season by claiming the overall series win. Bailey Sagaidak continued his impressive showing on debut, picking up third with a last lap pass handing Jayden Ransley fourth and a podium in his first event down under, while Lewis Hodgson secured fifth and the final podium placing. 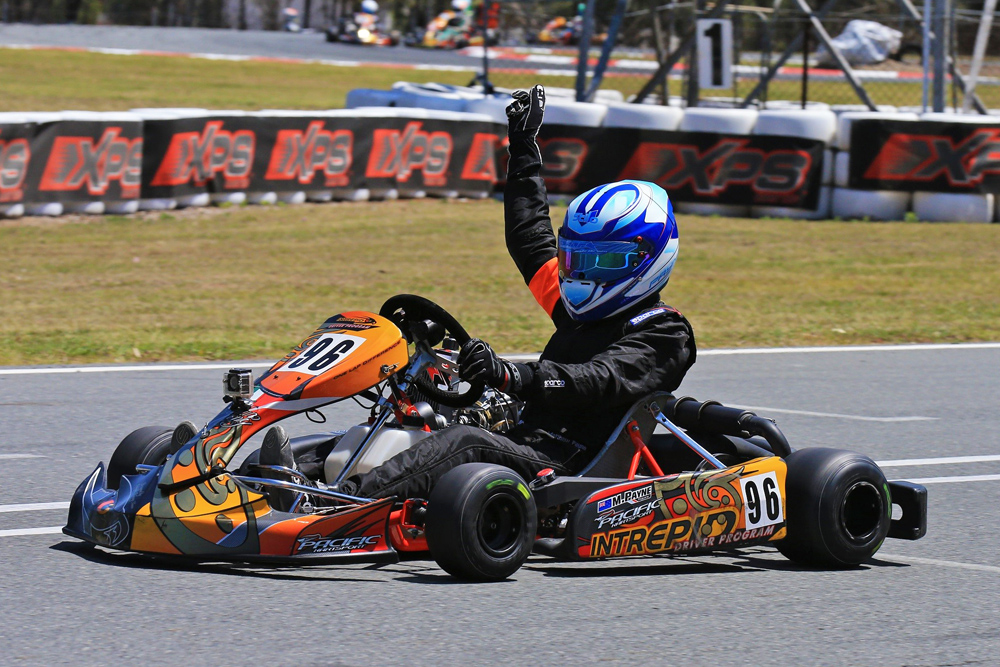 Junior Max
Canberra’s Zane Morse returned to his trademark form amongst the 44 kart field for the Junior Max pre-final as he secured a 1.3 second victory, ensuring he was one step closer to a first ever appearance at the Rotax World Finals. Morse finished ahead of Aaron Cameron who built on consistent pace throughout the heat races with Joshua Fife stepping up to take third over Cameron Longmore in fourth. Reece Sidebottom fought back from a mixed day on Saturday to take fifth ahead of Timothy Colombrita in sixth.

The 20 lap final proved to be a closer battle amongst the front runners with Zane Morse managing to eventually go on and take the win, earning himself his second number one plate in the class for the second year in a row. Aaron Cameron would again finish second, helping to achieve his first appearance for Team Australia with the top three being a replica of that in the pre-final with Joshua Fife taking third. Cameron Longmore stepped up to take his first Pro Tour podium of his career while Reece Sidebottom also helped to lock in his first World finals trip, finishing fifth. 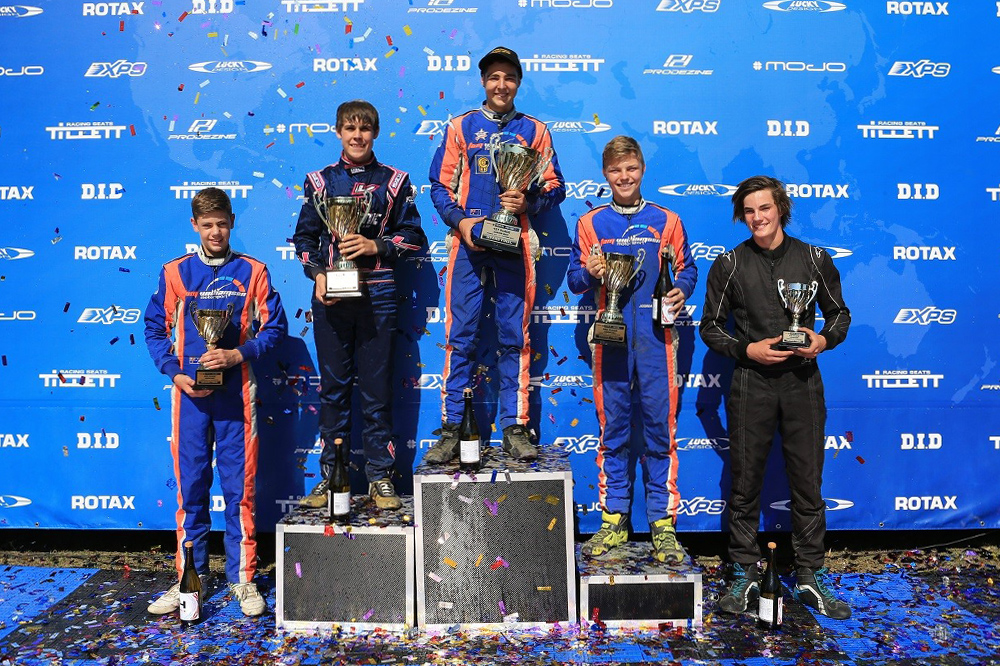 Rotax 125 Light
On the back of his clean sweep of wins in the heat races, EuroMax Champion Pierce Lehane remained to be the man to beat in the pre-final for Rotax Light as he took a convincing 2.5 second victory, handing him pole position for the last race of the season. Queensland’s Nicholas Andrews managed to continue his strong form spike on home soil, taking second ahead of team mate Brad Jenner. Troy Morrissey utilised a wealth of home track knowledge at the Ipswich circuit as a boost towards claiming fourth over Cody Gillis and Brock Lannoy.

Following his win in the pre-final, Pierce Lehane helped to ensure he would finish his Pro Tour year in fine style, claiming the win by 3.9 seconds over Nicholas Andrews who’s results would help him secure his first appearance at the World finals as part of the Senior Max team.

Brad Jenner backed up from his third place result earlier in the day to again pick up another round podium and a back to back overseas trip while Thomas MacDonald and Liam McLellan capitalised on a strong start to earn themselves a place on the podium. 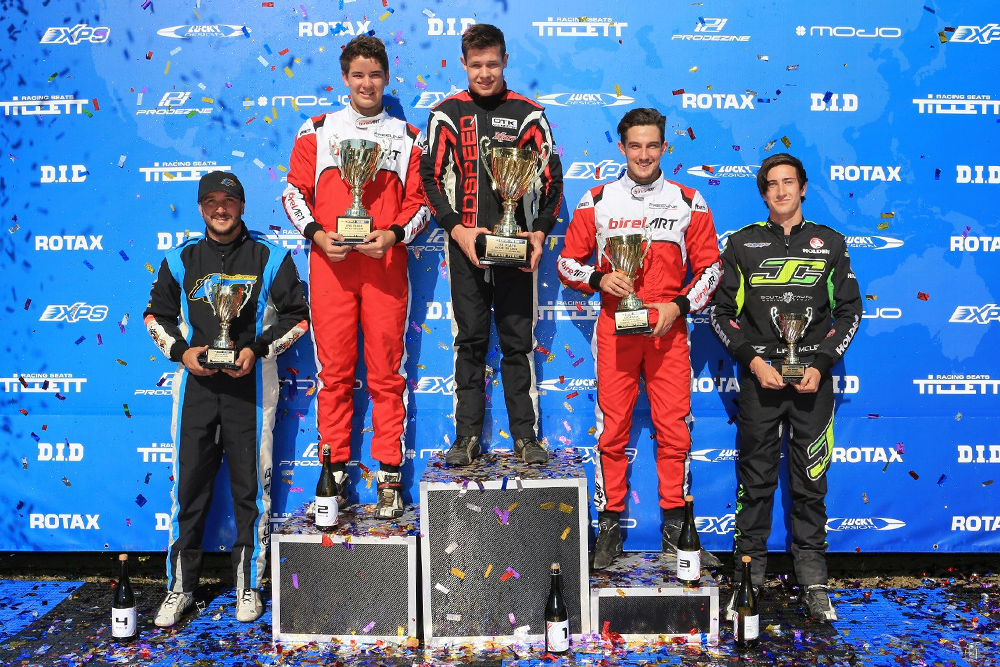 Rotax 125 Heavy
Following a clean sweep through qualifying and the heat races, series points leader Chris Farkas stepped up his game in the Rotax Heavy pre-final, picking his way through to claim the win by 0.7 seconds in the first of the weekend’s two longer races. Farkas managed to finish ahead of Payne with the pair subsequently set to share the front row for the start of the all-important final. With Queensland State title points on the line, Lane Moore was working hard to secure the best result possible on the back of his round win in Warwick with Moore securing third ahead of Clem O’Mara and Brendan Nelson with Shay Mayes finishing sixth and picking up a third row start for the final.

After picking up the win in the pre-final, Chris Farkas worked to ensure he would become the Rotax Max Australian Challenge Champion for Rotax Heavy in the best way possible, fending off an early challenge to go on to claim the win. Farkas’ victory came by 3.8 seconds over Regan Payne with Brendan Nelson working his way through to claim third. Shay Mayes went on to finish fourth ahead of Jarad Neinert and Alex Waters. After being inside the top six in the pre-final, contact between Clem O’Mara and Lane Moore resulted in O’Mara finishing 11th and Moore suffering a DNF. 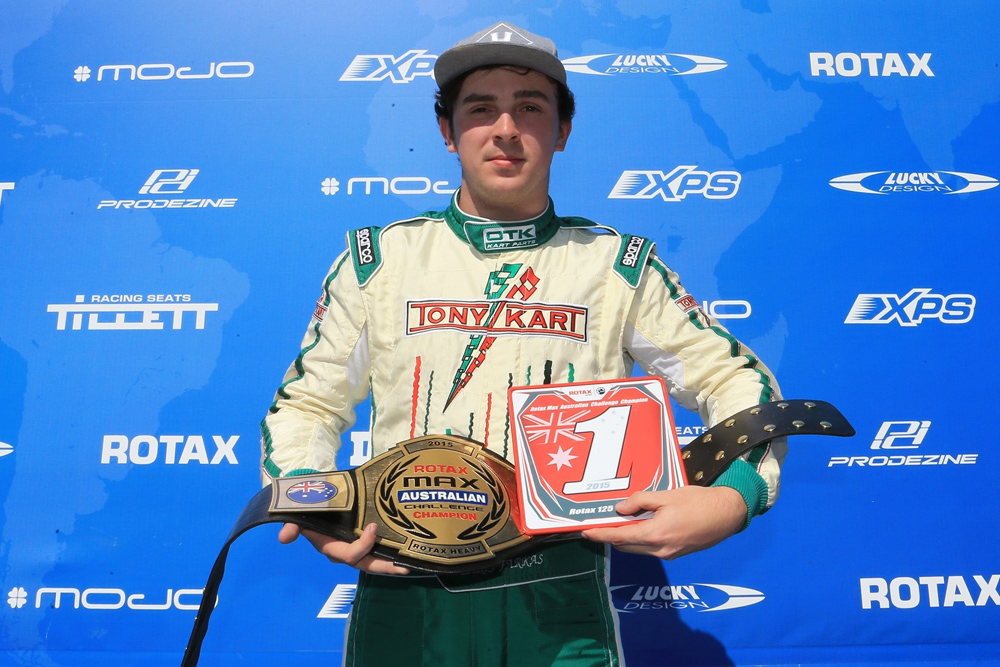 DD2
Ryan Kennedy built upon his strong start to the weekend through qualifying and the heat races by picking up the win in the pre-final in a convincing fashion, commencing a healthy boost to his overall series point score as he continued his quest to return to the World Finals for the second year in a row. Troy Woolston built on his strong heat race form to pick up second, 1.4 seconds behind Kennedy with Kris Walton stepping up to finish third over Adam Lindstrom and the returning Troy Bretherton. Series points leader Jason Pringle would finish sixth, handing him a third row start for the final.

The last race of the 2015 season saw Ryan Kennedy take an even more convincing victory than that of his pre-final result, picking up the win by 2.5 seconds with Troy Woolston again placing second. The results ensured the pair would form two of the three seats for the DD2 group for Team Australia joining Jason Pringle who managed to finish seventh. Kris Walton and Troy Bretherton finished third and fourth respectively with Adam Lindstrom claiming the final podium place. Pringle also managed to claim the series win on top of his ticket to the World Finals. 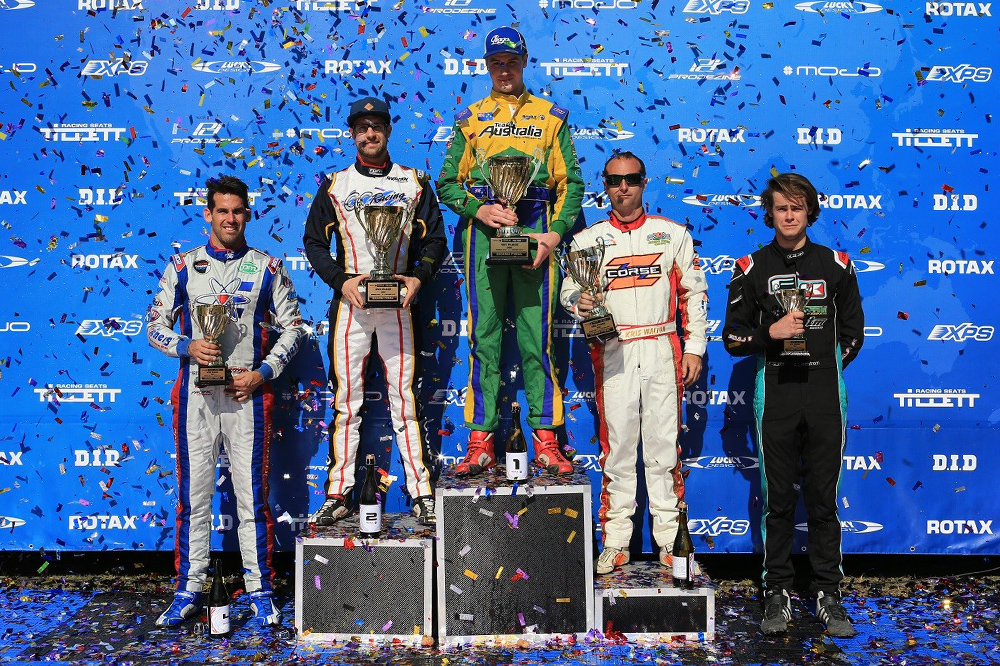 DD2 Masters
Starting from pole position in the pre-final, Queenslander Scott Howard looked to be amongst the favourites to take out the win in the first of Sunday’s two races, however he would have to settle for second as a hard charging Adam Hunter returned to his trademark form, securing the win by a mere 0.4 seconds over Howard with Danny Wright fighting his way to claim third over Daniel Richert in fourth. Jason Hryniuk and Klinton Hancey rounded out the top six with all of them placing themselves as realistic chances of success in the final.

Hunter continued his impressionable form, opening up an even greater margin to his opposition in the final, securing the victory by 1.9 seconds over Scott Howard. Hunter’s results also earnt him the overall series win and a return to the Rotax Max Challenge Grand Finals for Team Australia. Daniel Richert and Danny Wright traded places from their pre-final result, finishing third and fourth respectively over Jason Hryniuk and Peter Virgulti. 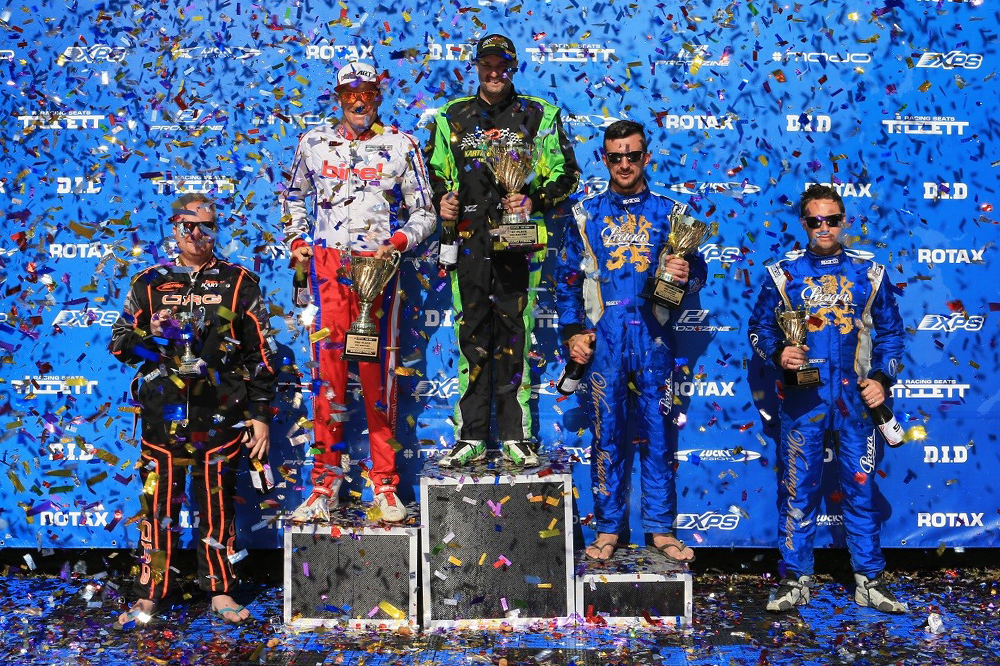 International Karting Distributors (IKD), promoters of the Rotax Pro Tour, would like to extend a very big thank you to all of the host clubs of the seven rounds of the 2015 series. Each and every event showed a large amount of work put in before, during and after the event to help make the rounds a success. Without the ongoing support of the volunteers at each event, we wouldn’t be able to have such successful events, in particular, a special thank you to our series officials, Graeme and Jeanette Monds and Chris Robinson. IKD would also like to send a big thank you to all of the competitors, pit crew, family, friends and Karting dealers for their continued and overwhelming support of the Rotax Pro Tour and for helping to make it the success that it is today.

See you all next year!