The Rotax Pro Tour will host the third running of the Jason Richards Memorial this weekend in memory of the former V8 Supercar driver and Pro Tour competitor.

Along with the prestige of the Jason Richards Memorial Award, the event will feature a new one-off format which will be a first for karting in Australia. Drivers will qualify and compete for a final result on Saturday, and again on Sunday. As with last year’s event, Victoria’s Geelong will host the race with fields strengthening at the business end of the season. 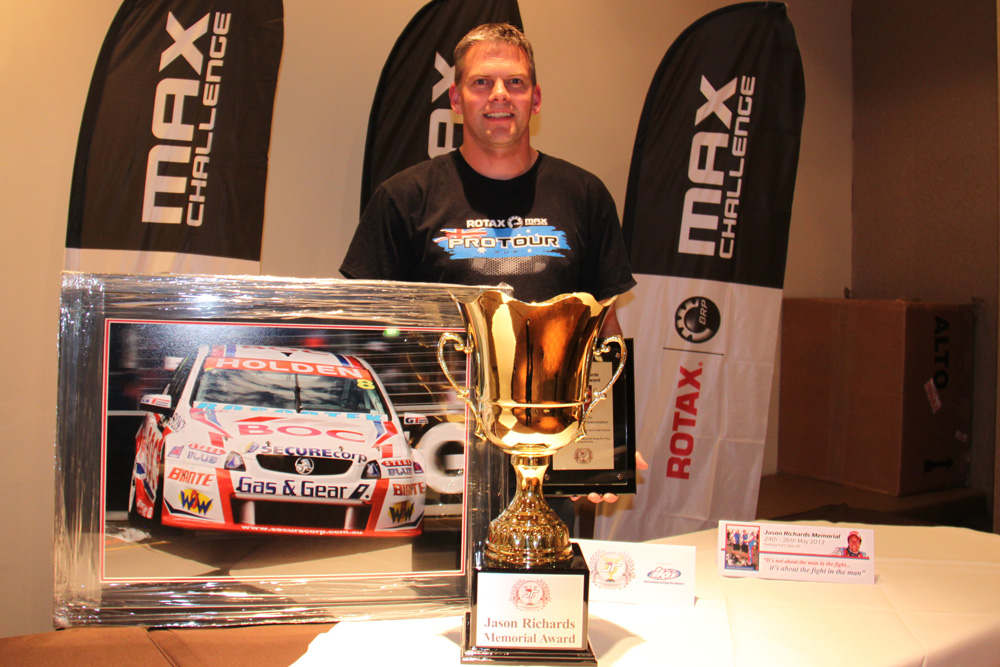 In 2013, Victorian Hamish Leighton was crowned the Jason Richards Memorial Award winner and will be amongst the favourites to secure the win this weekend in DD2 Masters. Leighton is expected to be challenged by Geelong local and regular front runner, Daniel Richert who makes his return to the series after being absent for the last two rounds. Despite the local experience from Leighton and Richert, Adam Hunter remains the ultimate driver to catch in the field with his Karting World prepared LH Kart being unstoppable for the season so far. 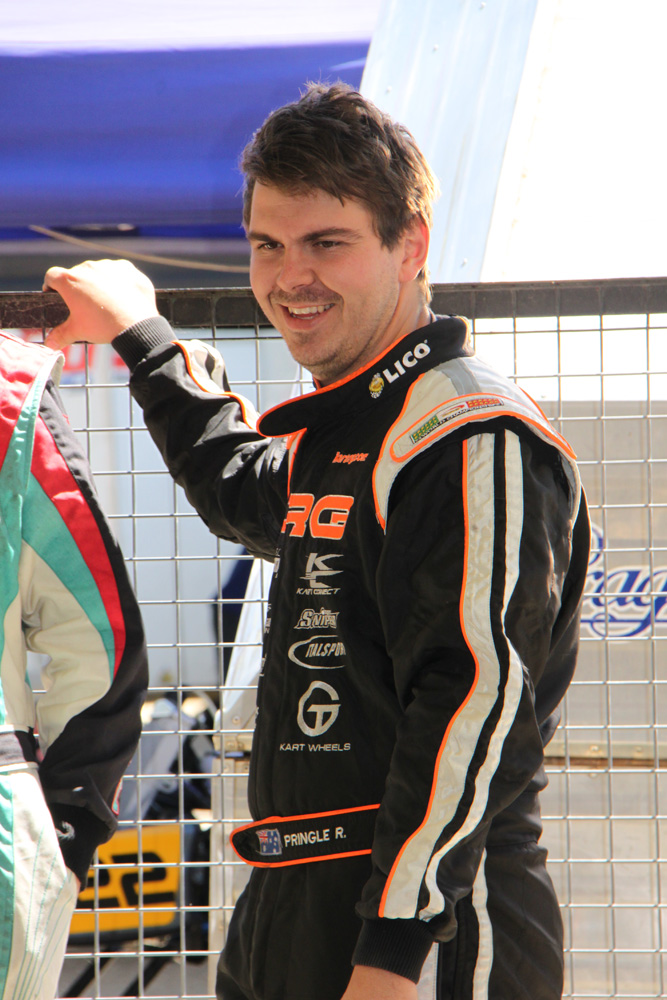 Rick Pringle returns to lead the Rotax Heavy field after claiming round one and two earlier in the season. Pringle’s experience and form at Geelong last year has him as one driver to watch along with Paul Rodgers and Dylan Collett who, along with Pringle and Travis Kodric locked out an all Pro Karting podium at the event last year. 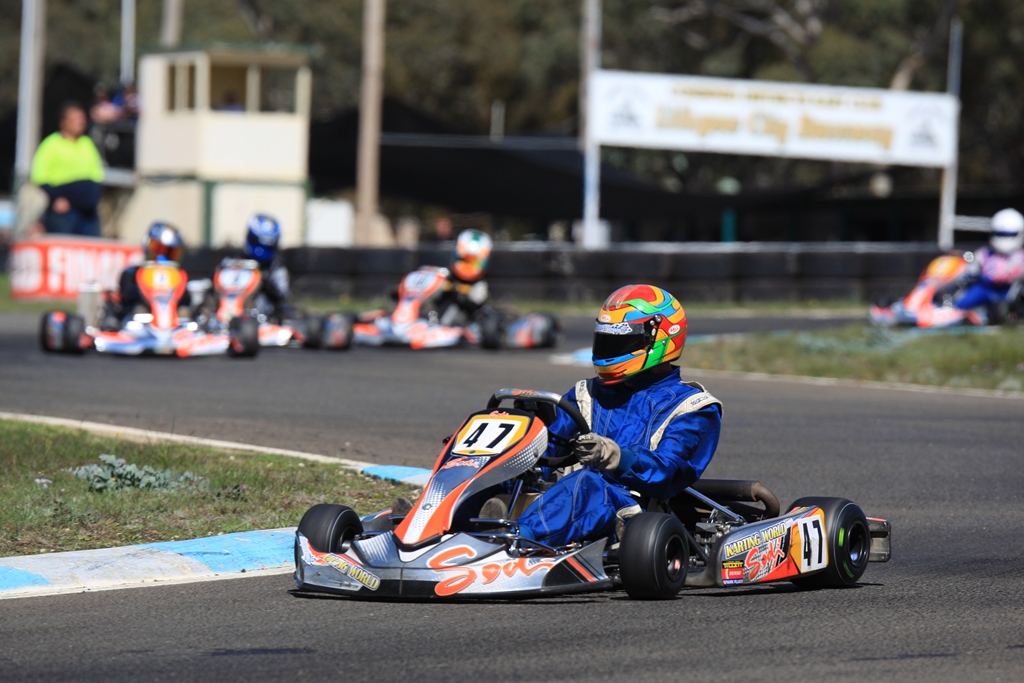 Above: Glen Ormerod will be amongsth those at the front of the Sodi Junior Max Trophy Class.
Photo - Coopers Photography

Sydney’s Glen Ormerod set the pace throughout much of the weekend at Pro Tour Lithgow in the Sodi Junior Max Trophy Class before victory was claimed by West Australian Samuel Dicker on debut in the category. Dicker returns this weekend in Geelong and his form at the last round has him as one of the favourites alongside Ormerod, Brooke Redden and the experienced Chris Bregonje. 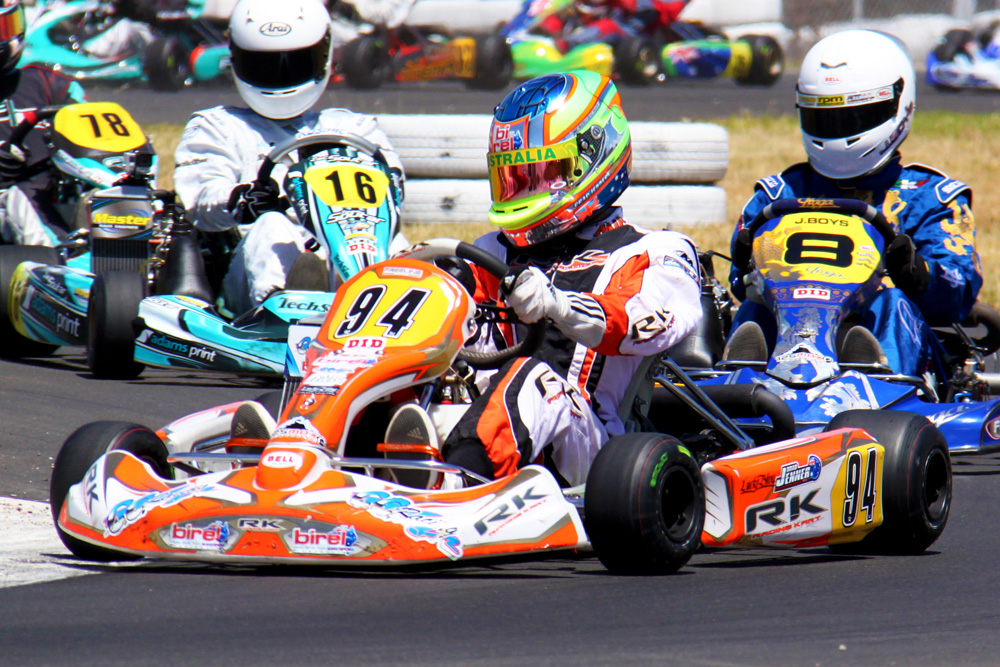 Above: Brad Jenner leads the Rotax Rankings in Rotax Light and took the win at Geelong in 2013.
Photo - IKD

After a blistering start to the Pro Tour season, Brad Jenner is expected to be the favourite in Rotax Light with the Victorian having taken the win in the corresponding meeting last year. The RK Karts driver currently leads the Rotax rankings ahead of Andrew Carey who will be looking to rebound from a disappointing result at the last round in Lithgow. Queenslander Ryan Kennedy currently sits third in the rankings and continues to deliver a consistent display of results and will be amongst the front runners again on the challenging Victorian circuit. After his win at the Victorian Open State Karting Championships in Rotax Light, Blaine Densley returns to the series alongside fellow statesman and 2013 Team Australia member, Liam McLellan. 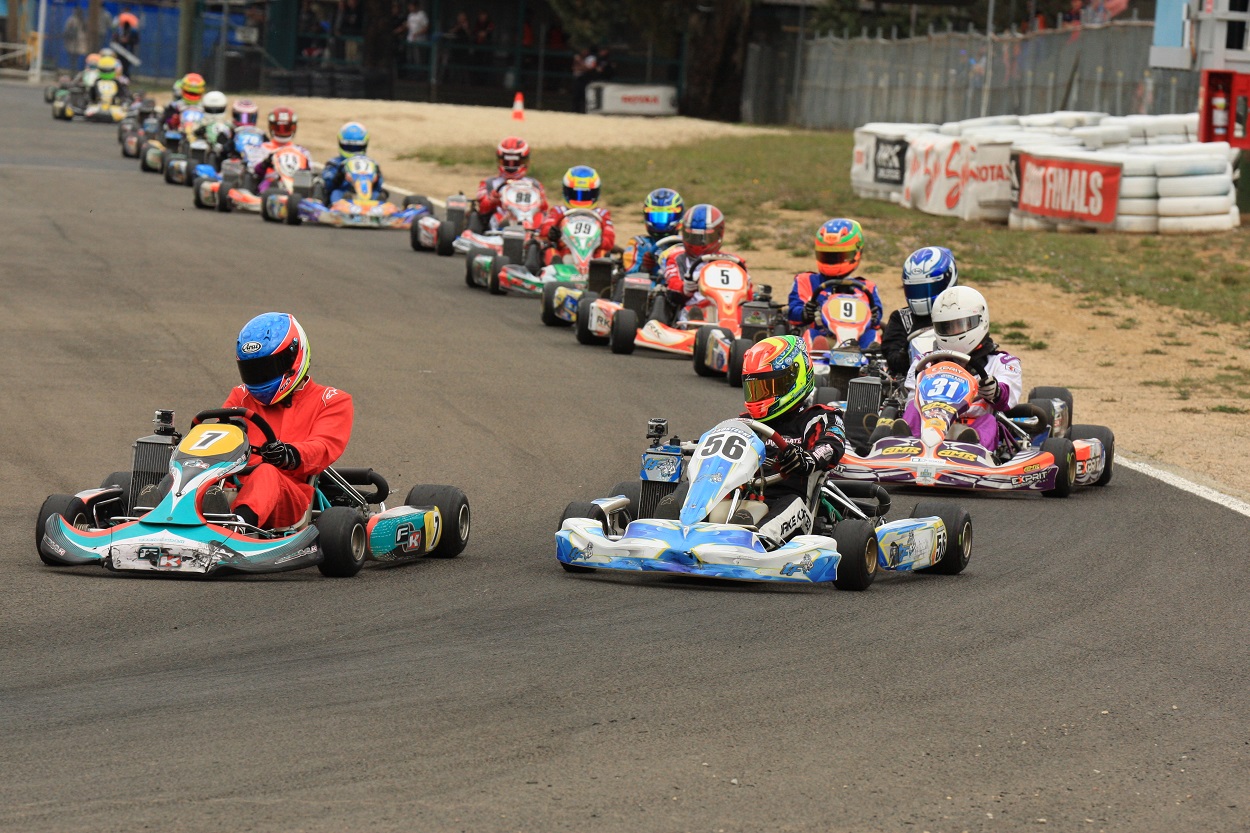 Sydney driver Jayden Ojeda continues to lead the Rotax rankings in Junior Max, entering this weekend hopeful of continuing his strong form throughout the season. Ojeda’s closest challengers in the points race, Callum Walker and Bryce Fullwood, are separated by just over 400 points in the standings. The event marks 12 months since Fullwood joined the open Junior Max category, after progressing from the Trophy Class. The Darwin driver will be hoping to replicate his pole position that he achieved at this event last year. Both Zane Goddard and Isaac Vaccarella are within reach of the top three in rankings, with Vaccarella boosting his confidence following a podium at Lithgow. New Zealand’s Dylan Drysdale, the younger brother of Rotax Light’s Josh Drysdale will also make his Rotax Pro Tour debut this weekend. 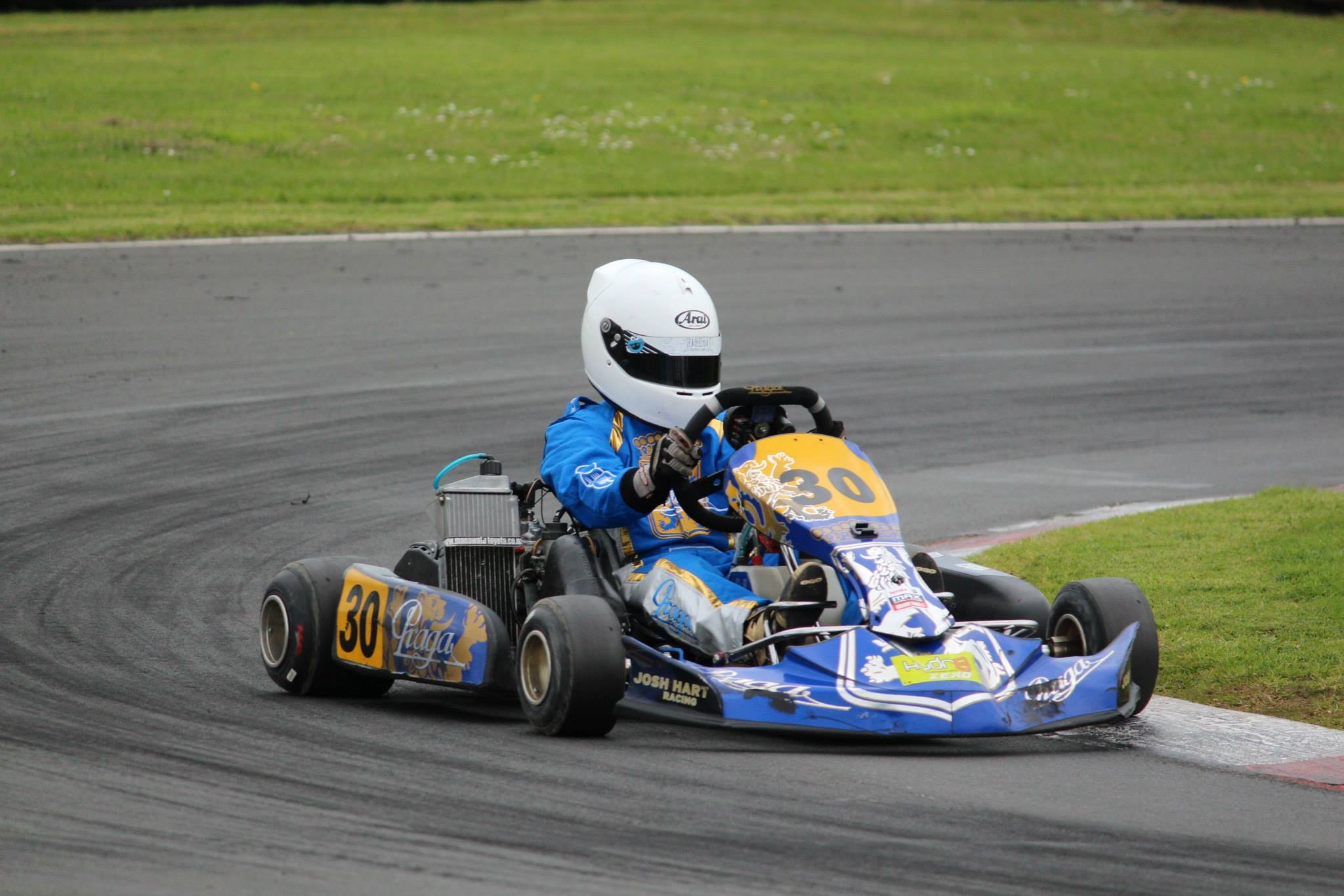 An impressive 24 kart DD2 field is amongst many highlights for this weekend’s event, with the winner of Sunday’s final also receiving the Jason Richards Cup in recognition of Richards’ participation in the class. Jason Pringle was the winner last year and remains a favourite to secure victory, while fellow Victorians Adam Lindstrom and Troy Woolston remain strong chance of grabbing the win. Woolston was also the winner of the inaugural Jason Richards Memorial in 2012 in Albury and it continues to be an event he holds in high regard. Former Team Australia member Damian Ward makes his return to the series along with Jackson Delamont who spent his 2013/2014 summer as a contracted driver in the World Series Sprintcars. 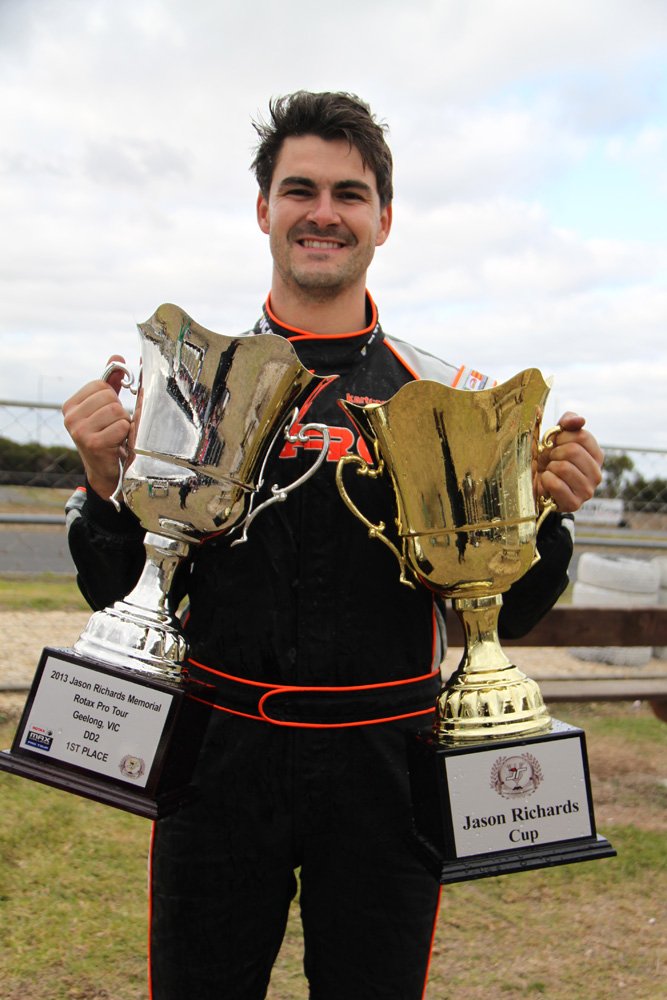 Above: Jason Pringle was the winner of DD2 and the Jason Richards Cup at Geelong last year.
Photo - IKD

This weekend’s events will follow the new format with two similar programs for Saturday and Sunday. On both days, a qualifying session of eight minutes will be followed by two heats of 14 laps with Saturday’s final over 20 laps and Sunday’s final over 22 laps. Qualifying for Sunday’s racing will be run on Saturday afternoon (if time permits). Adding to the excitement, just one set of Mojo tyres will be permitted, thus testing the tyre management capabilities of drivers across the weekend.