Following the abandonment of Saturday’s racing schedule due to extreme weather conditions, a revised racing program was released with one heat followed by the previously planned pre-final and final. With that came fierce enthusiasm to make the most of the track time as drivers gave it their all in the battle for round points and the Queensland State Championship.

Sebastian Ruiz maintained his impressive form in the Micro Max class, securing victory in both the pre-final and final, putting him at the forefront of the class in an effort to be part of it’s debut at the Rotax MAX Challenge Grand Finals in Italy in October. Ruiz finished ahead of New Zealand’s Emerson Vincent with Lachlan Platten third from Macka Hazard and Jordan Ensbey. 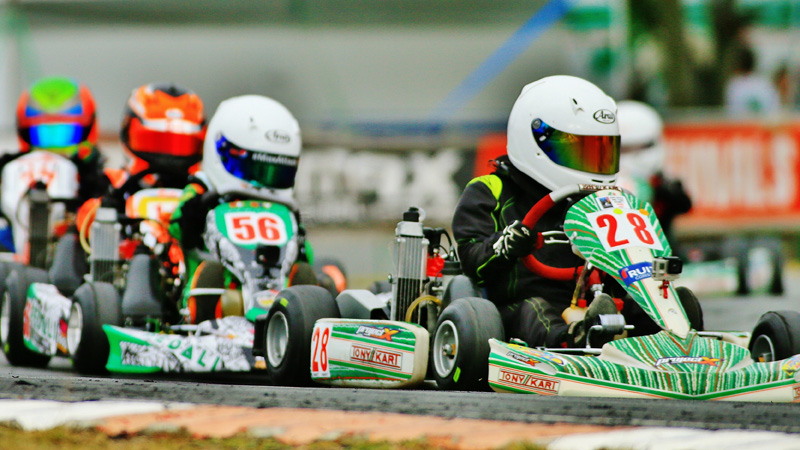 Above: Sebastian Ruiz (28) on his way to victory in Micro Max (Photo by Ian Ward) 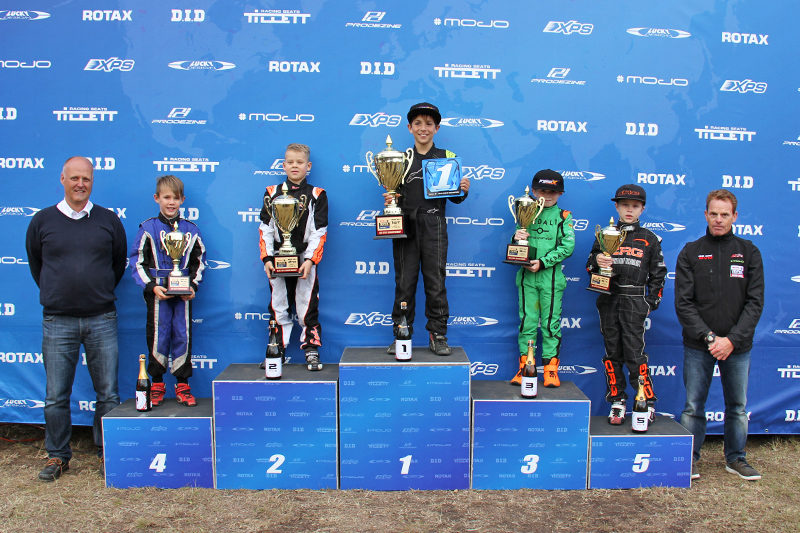 Queensland’s Luke Pink made the most of the longer laps in the pre-final, driving his way from 15th through to third, showing strong form on home soil. Likewise, Victorian James Wharton who made his way from 13th through to sixth. The pair would come home in first and second in a shortened eight lap final with the race having declared due to a red flag incident which took place beyond the minimum required 50% race completion mark involving Ethan Feather and Jack Westbury. Both drivers were attended to by track medical staff and cleared from that point.

Jack Grambauer picked up his best result of the round with third in the final while Kai Allen, Hugh Barter and Charlie Ploetz who completed the top six in the last race of the weekend, all worked back through the field after recording DNF race results in the heat race. 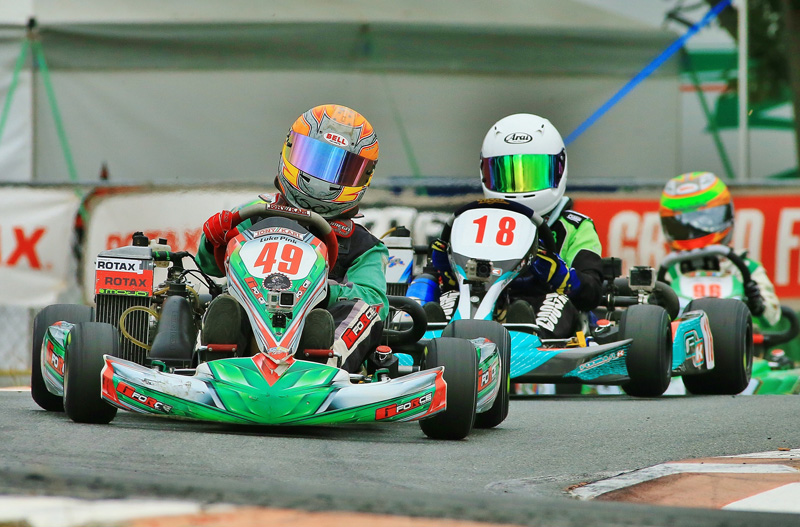 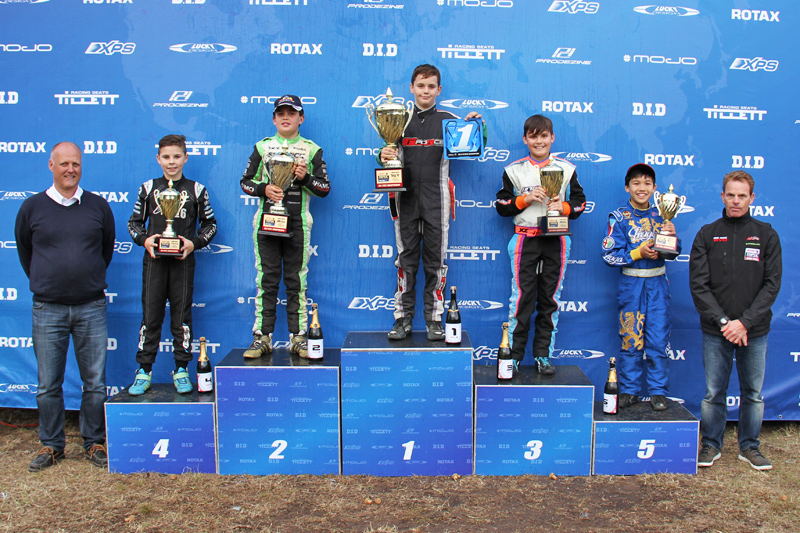 Travis Worton continued his strong showing since joining the Pro Tour Series in round two by taking a clean sweep in all three races for Junior Max Trophy. Worton’s victory in the final came ahead of Kiwi Samuel Wright who gradually worked his way through the field to finish second, a mirror of his result from the heat with Zayd Tones picking up his best finish of the weekend with third. Callum Bishop and Jarrod Costello completed a revised podium after a post-race penalty was applied to Jaiden Pope, who finished third, which would exclude him from the race. 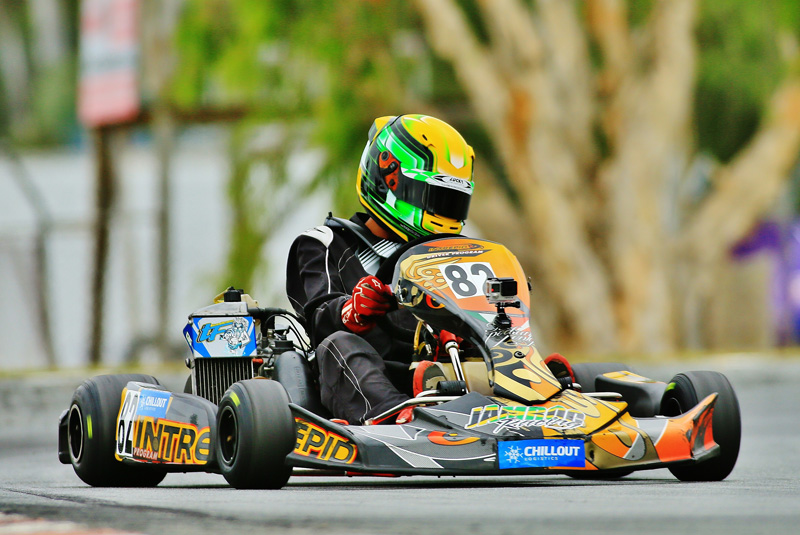 Above: Travis Worton edged out Kiwi Samuel Wright for the win in Junior Max Trophy (Photo by Ian Ward) 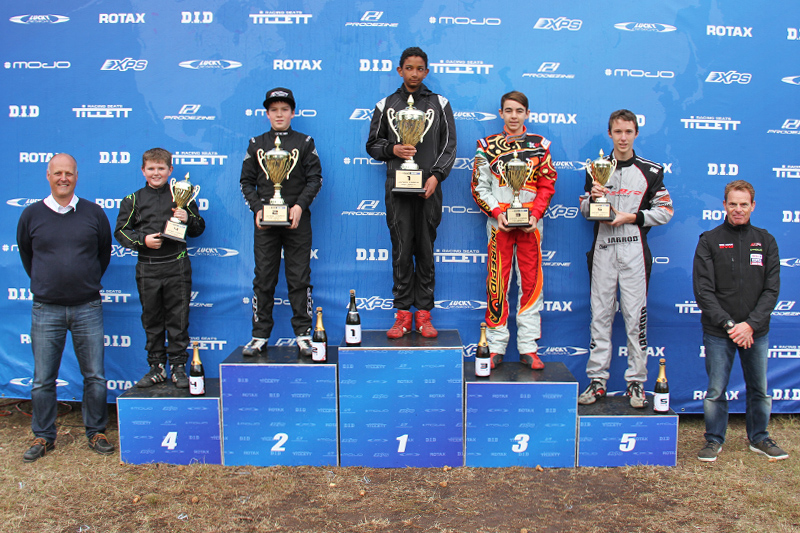 Tomas Gasperak took full advantage of racing on his home track in his return to the Pro Tour, claiming the win in both the pre-final and final. Gasperak’s two victories came on the back of a fifth place finish in the heat. In a race that saw multiple changes for position within the top five podium places, Cody Brewczysnki eventually broke through to secure second following on from a third and fourth place finish in the two prior races, securing the result ahead of fellow series favourite Dylan Hollis. The Victorian entered this weekend leading the points and picked up a second and third place result in the two points scoring races.

Cameron Longmore made solid progress throughout the day after finishing the heat in 15th, he worked through to eighth in the pre-final before taking fourth in the final ahead of Kyle Bonser in fifth with Bonser having finished inside the top four in the first two races. New Zealander Matthew Payne just missed out on his first podium result in Junior Max by finishing sixth. 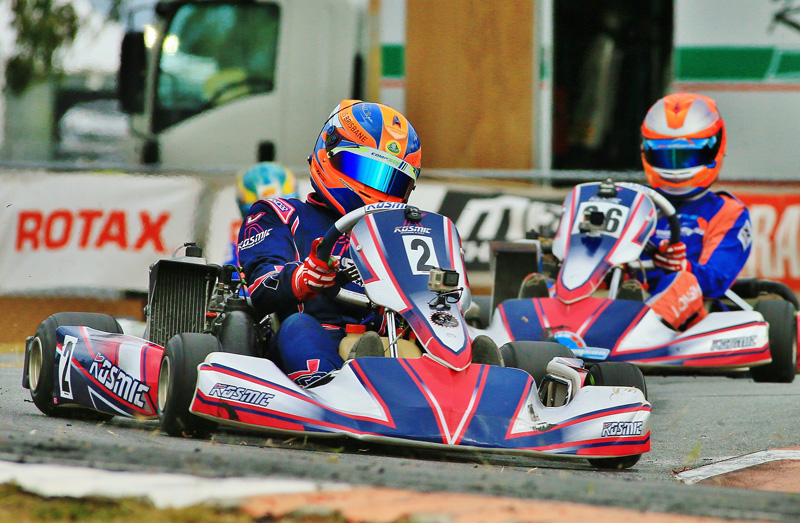 Above: Tomas Gasperak (2) won both the Pre-Final and Final in Junior Max (Photo by Ian Ward) 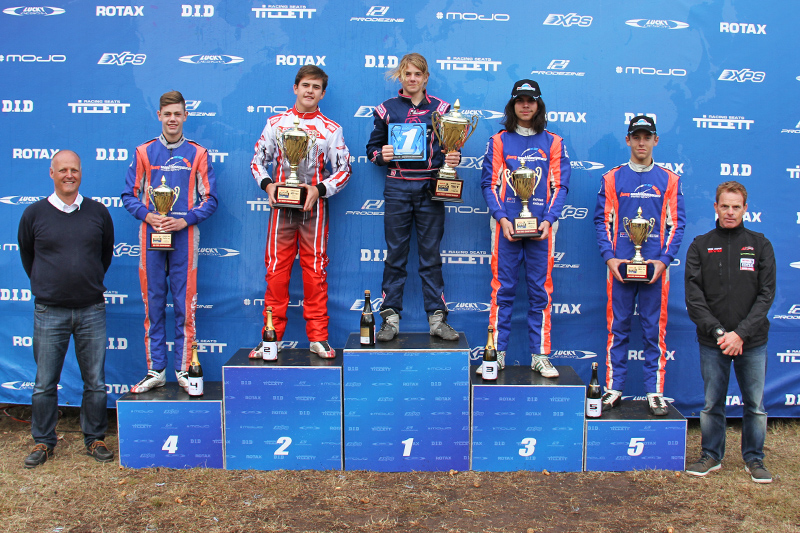 Reigning Rotax MAX Australian Challenge series winner and EuroMax Champion Pierce Lehane hadn’t claimed a race victory for the weekend up until the 17 lap final where the Sydney driver broke through for victory. Canberra’s Joshua Fife was in the points from the outset, taking the win in the pre-final and settling for second in the final, providing a healthy boost to his chances of making a debut appearance at the Rotax MAX Challenge Grand Finals for Team Australia later this year.

Nicholas Andrews delivered his trademark strong home track form, coming away with third in the final after finishing fourth and fifth in the earlier races with Eastern Creek round winner Brad Jenner settling for fourth, his best result of the weekend. Hayden Cox managed to be inside the top ten throughout the day, eventually recording his first ever Pro Tour podium to come home in fifth.

Above: CRG'S Pierce Lehane (1) took victory in the one race that counted (Photo by Ian Ward) 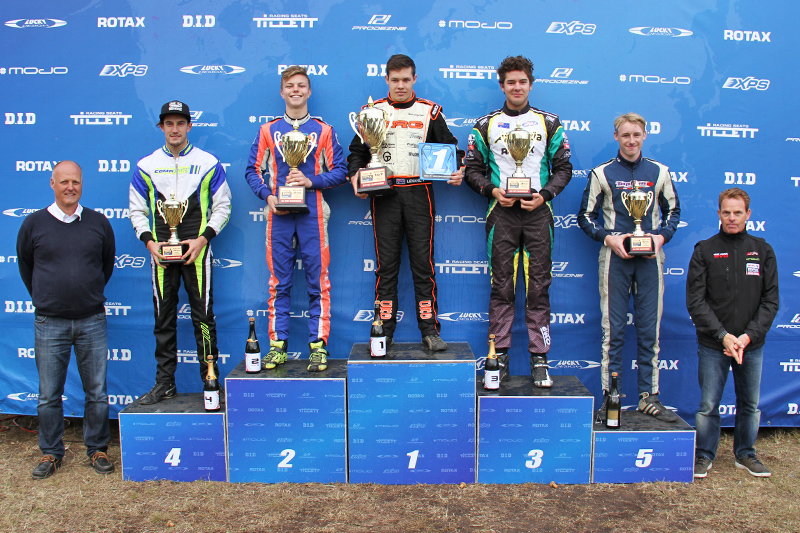 Chris Farkas managed to take maximum points from both the pre-final and final by taking the win, thus setting his sights towards defending his Rotax MAX Australian Challenge series win from 2015. Farkas finished ahead of fellow Queenslander Lane Moore who earnt three 2nd place finishes across the day.

Joshua Davey delivered ultimately the drive of the day for the class, after finishing 16th in the heat, he drove through to take seventh in the pre-final and third in the final, setting the fastest lap of the race on multiple occasions on his way. Brock Lannoy and Clem O’Mara would go on to make it an all Queensland podium for the category, taking fourth and fifth respectively. 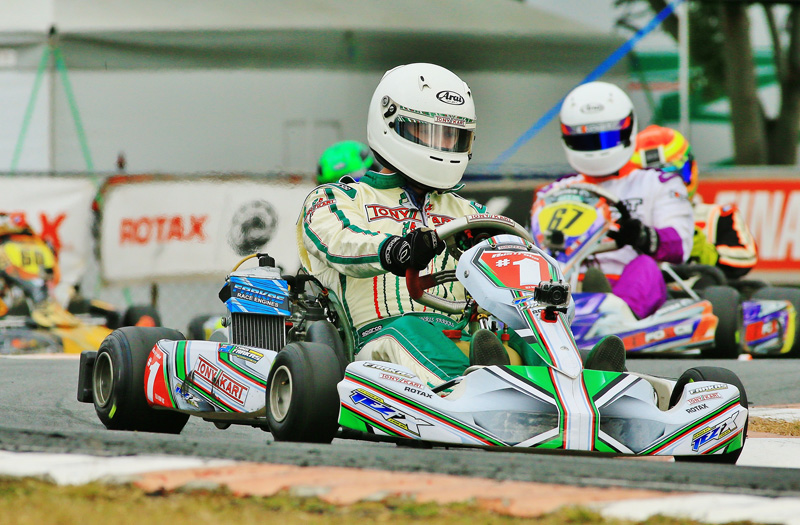 Above: Local Chris Farkas (1) added another blue plate to his collection in Rotax 125 Heavy (Photo by Ian Ward) 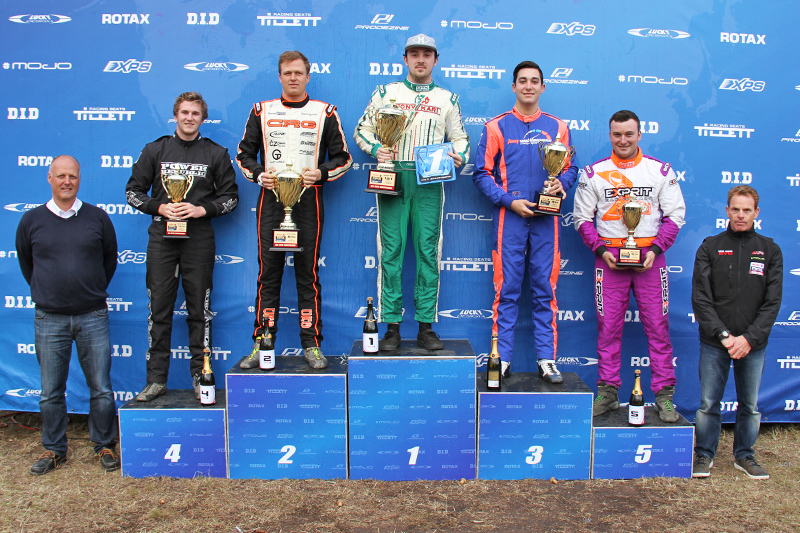 Victorian Adam Lindstrom delivered a progressive performance in DD2, finishing fifth in the heat race and second in the pre-final, the regular front runner moved his way to the lead, claiming victory ahead of Nathan Tigani who started the race on pole following his victory in the pre-final, Daniel Rochford continued his successful weekend, in just his fourth outing in a DD2, the Victorian picked up third in the final on the back of a second and third place finish earlier in the day.

Troy Woolston continued the Victorian domination of the podium by finishing fourth, a replica of his result from the pre-final. Joshua Car was faced with the ultimate challenge, starting the final from the rear of the grid due to a DNF in the pre-final. The determined young racer picked his way through the field as he chased down two podiums back to back, managing to grab the last step of the podium in fifth. 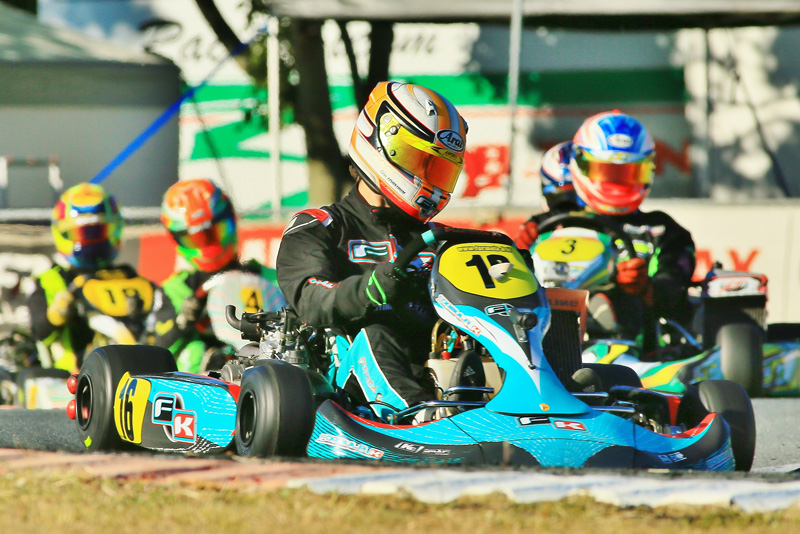 Above: Formula K's Adam Lindstrom (16) chased down Nathan Tigani for the win in DD2 (Photo by Ian Ward) 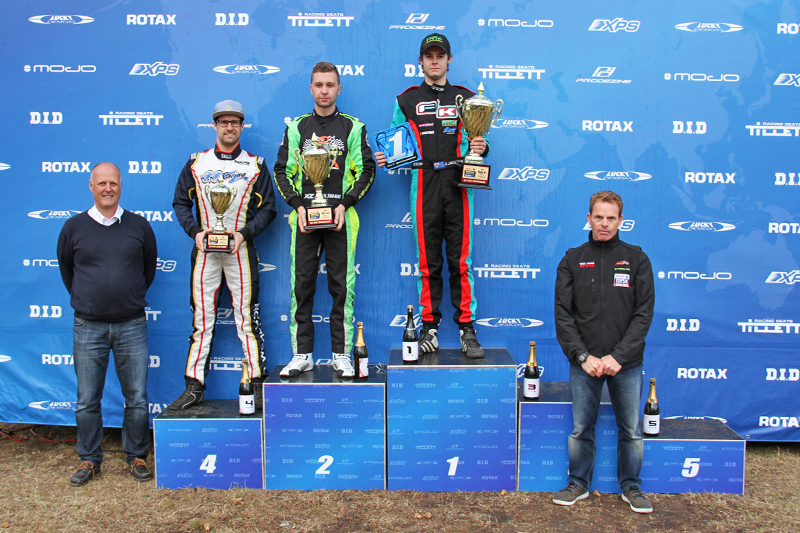 The victories across the three races in DD2 Masters but it would ultimately be Victorian Lee Mitchener who came out on top in the final. Mitchener, who led the series points entering the weekend, secured a pair of fourth place finishes in the heat and pre-final before working his way to the lead in the final, thus taking maximum points and the State title.

Scott Howard made a strong start to the longer race, leading in patches on the back of his victory in the pre-final before settling for second behind Mitchener with fellow Queenslander Kris Walton finishing third, making a trio of top three finishes for the weekend. The top five created the ultimate battle pack throughout the race and remained the only realistic chances of victory with Troy Bretherton finishing fourth and Mark Flood fifth. 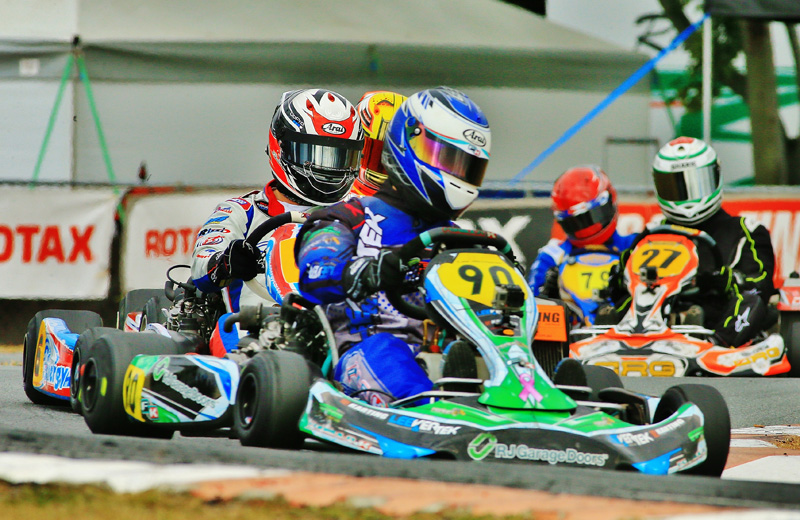 Above: Lee Mitchener added to Formula K's success on the weekend, taking the win in DD2 Masters (Photo by Ian Ward) 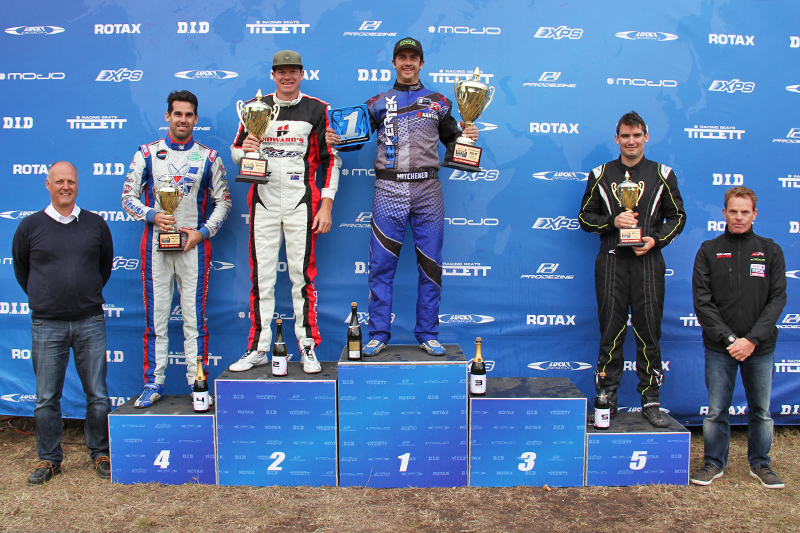